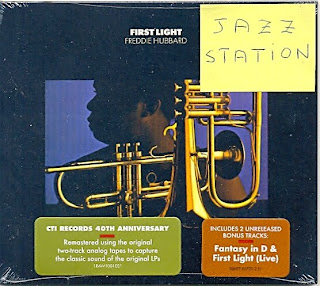 OK, I know that "Red Clay" is regarded as Freddie Hubbard's masterpiece. And love I that album, as much as I adore "Sky Dive." But my personal favorite Hubbard album ever always was "First Light." The first time I met him in person, in LA in the late 70s, I told him about it. He smiled and hugged me, saying: "it's my favorite album too!" A decade later, when working with him in a recording session for Swiss-based Brazilian guitarist Roberto Avila, I pretended I had forgotten our conversation and asked him which was his best album ever. He confirmed his choice.

It's not difficult to understand why. And it's easy to understand why the jazz purists hate it. It's one of those truly perfect CTI albums produced by Creed Taylor, with a fabulous crossover repertoire, great cover art, impeccable sound courtesy of Rudy Van Gelder, an all-star cast featuring CTI giants (Ron Carter, George Benson, Airto - still signed to the Buddah label but ready to move to Creed's stable - Hubert Laws), superdrummer Jack DeJohnette and the underrated pianist Richard Wyands, who also recorded on Kenny Burrell's "God Bless The Child," and played Fender Rhodes exclusively on this set.

Above all, there's the superb work by genius arranger Don Sebesky, who provided magnificent scores for strings & woodwinds, besides contributing as composer of a lovely ballad, "Yesterday's Dreams." In many CTI All-Stars concerts that remain unissued, Hubbard played "Yesterday's Dreams" a capella on flugelhorn (although he had recorded it using a muted trumpet), always receiving standing ovations. Not to mention the fantastic groove of the title track, which became an instant classic and another must-have song in all Hubbard's live performances during his CTI days.

The three other tracks sound fantastic too: Leonard Bernstein's haunting "Lonely Town" (with Phil Kraus' "classical percussion" and the only Wyands solo on the entire album), Henry Mancini's "Moment to Moment" (with Ron Carter quoting Moacir Santos' "Nanã" when starting the groove), and Paul McCartney/Linda McCartney's "Uncle Albert/Admiral Halsey" (from Paul's album "Ram"), a single which had reached number one on the Billboard Pop Chart one month earlier, in August 1971, making it the first of post-Beatles singles composed by McCartney to top the US pop chart during the '70s.

Not surprisingly, "First Light" also reached the Billboard charts, peaking at #9 in the Jazz list and #25 in the R&B list after its original LP release in January 1972. And, most deservedly so, gave Freddie Hubbard a Grammy Award. 40 years later, it still sounds fresh and contemporary. Cheers!
***********
This CD reissue also includes two bonus tracks: Cedar Walton's "Polar AC" (aka "Fantasy in D" aka "Ugetsu") and a live version of "First Light". You'll find more details below in the text that CTI's top connoisseur, Doug Payne, wrote for his "Sound Insights" blog:
http://dougpayne.blogspot.com/2011/04/celebrating-cti-records-40th.html

Despite the presence of some of jazz’s best – and most influential – artists, including guitarist George Benson, pianist Richard Wyands, bassist Ron Carter and drummer Jack DeJohnette, First Light was slammed for Don Sebesky’s always critically-attacked sweetening and the presence of a huge pop-hit cover of the day (the million-selling number 1 hit “Uncle Albert Admiral Halsey” by Paul and Linda McCartney).

Even Hubbard’s superb title song was derided as a riff-based jam tune that didn’t require the chops or the talent of a soloist who factored on some of the era’s most important jazz recordings by otherwise-celebrated jazz heroes Oliver Nelson, John Coltrane, Eric Dolphy, Ornette Coleman and Herbie Hancock.

Still, First Light proved not only to be one of CTI’s very best sellers at the time, it also won the trumpeter his first and only Grammy Award in 1972 for Best Jazz Performance over and above other such CTI competition as George Benson’s White Rabbit (also arranged by Don Sebesky) and Joe Farrell’s Outback. The trumpeter himself was often heard to claim First Light as his personal favorite of his own records.

Hubbard’s title track is a truly inspired composition that seemingly yields more than its 11 minutes suggests. Freddie Hubbard wails with impassioned desire. George Benson plays one of his most deliciously intricate, yet achingly lyrical solos. Carter comps (if that doesn’t sound too derogatory) in a way that suggests melody and counter-melody all at once. Sebesky lays back quite a bit, only adding spare commentary from properly placed strings, vibes (playing accentuating whole tones, a Sebesky trait) and a flute section led by Hubert Laws, who solos occasionally.

“First Light” became something of a hit (it was issued as the album’s single) and a signature song for the trumpeter. Freddie Hubbard often played the song live and it was captured as part of the same 1973 concert that yielded the two In Concert albums CTI released several years later. That performance of “First Light,” which was not issued on the In Concert records, was included on this and the previous CD of First Light, featuring (a strangely uncredited) Herbie Hancock on electric piano, Eric Gale on guitar as well as Carter and DeJohnette (a 1972 performance of the tune was issued on the 1977 album CTI Summer Jazz at the Hollywood Bowl – Live One).

Like so many of Don Sebesky’s previous Beatles arrangements, “Uncle Albert/Admiral Halsey” is a lot better than it sounds like it would be. It’s more imaginative than listeners of the McCartneys’ song would expect, matching a Stravinsky-styled arrangement with a funk rhythm which makes for creative jazz and provides sparklingly terrific solos from Hubbard, Benson, Carter and Laws.

“Moment to Moment,” Henry Mancini’s surprisingly little-known theme from the 1965 film of the same name, and Leonard Bernstein’s “Lonely Town” (from On the Town) both get terrifically orchestral readings here that focus purely on Freddie’s melodicism and Sebesky’s impressionistic backdrop.

Sebesky’s absolutely ravishing “Yesterday’s Dreams” started life as “Yesterday’s Dream” on Dizzy Gillespie’s Sebesky-arranged album Cornucopia (1969). Sebesky adds more strings to this variation and Hubbard mutes his horn here (Dizzy’s was open). But while Sebesky’s arrangement of the tune is much more subtle and preferable in the Gillespie version, it’s hard to deny the improved beauty that Hubbard, Carter and the chameleonic Jack DeJohnette bring to this particularly lovely variation of “Yesterday’s Dreams.”

Also recorded at these sessions is Cedar Walton’s “Fantasy in D” (first heard under that title on the 1973 Art Blakey album Anthenagin). Composer and pianist Cedar Walton was a longtime friend and associate of Hubbard’s, dating back to their time together in the Jazz Messengers and surely provided Hubbard with this song, even before recording it with Art Blakey, though the LP’s limited playing restrictions at the time prevented Walton’s song from being included on the First Light LP. Several years after Freddie Hubbard departed CTI for Columbia Records, producer Creed Taylor dug out the song (complete with a finished Sebesky string arrangement and lovely solos from both Freddie Hubbard and Hubert Laws) and called it, for whatever reason, “Polar AC.” It became the title track to that 1975 LP, which was recently issued on CD by Wounded Bird Records. The song is also featured here, under the title that Cedar Walton gave it on the album where it really belongs.

Like Hubbard’s previous album, Straight Life, First Light benefits by not one but two Pete Turner photographs, one on the front cover and a different one on the back cover. The front cover, one of the few CTI releases of the period that actually showed the artist, was especially shot for the album to show Hubbard and his horns. The back cover photo, “Hong Kong Rolls” (1963), was juxtaposed by the photographer himself to reflect the front cover’s golden horns, presumably both reflecting the golden glow of “first light.”
Posted by Arnaldo DeSouteiro at 10:07 AM