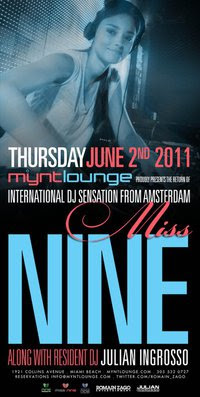 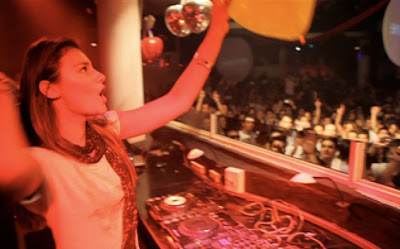 Miss Nine's eclectic taste in music, ranging from energetic grooves with plenty of vocals to a deeper, progressive sound has been moving audiences for sometime now.

She started her career at 16 not as a DJ but as a model. Shortly thereafter, she secured a worldwide contract with Elite Model Management. After moving to Amsterdam, she discovered the art of DJing and her passion for music eventually led her to acclaimed fame internationally....
A few months after touching the decks for the first time, she became a resident DJ at the legendary Motion parties where she evolved as an artist and DJ while playing alongside masters such as John Digweed, Dave Seaman, Nick Warren, and James Zabiela.

Miss Nine took to the decks as the youngest artist at the 10th edition of Dance Valley and at the end of 2005 she was then asked by Grammy Award winning DJ duo, Deep Dish to join Bullitt Bookings. She hasn’t stopped rocking the decks since.

With performances all around the world such as clubs like Privilege in Ibiza, Avalon in Los Angeles, Ministry of Sound in London to name a few venues outside of her other projects like Levi’s Curve campaign and the face of Pioneer 350 series.

Getting ready to tour globally, she graces us once more after her stunning performance for Miami Music Week. If you didn’t get a chance to get blown away the first time, don’t miss it this time around. Table reservations strongly advised. 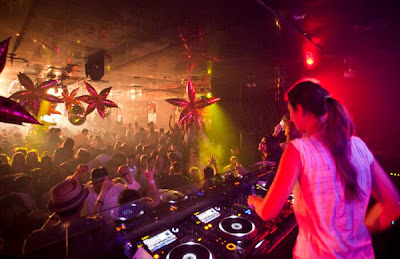 Posted by Arnaldo DeSouteiro at 7:20 PM