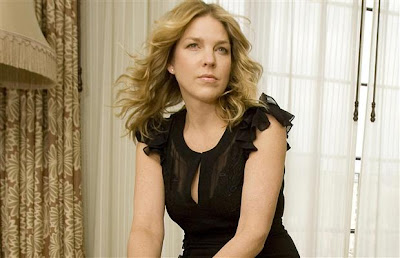 The love affair between Diana Krall and the Montreal Festival continues! The internationally acclaimed pianist and singer finally returns to the Festival International de Jazz de Montréal with her first solo concert series! She will perform on three consecutive nights in Théâtre Maisonneuve, Place des Arts, on June 26, 27 and 28 at 6 p.m., part of the En voix series. Tickets for all three performances, Diana Krall-Solo in Concert, part of the 32nd edition of the Festival, presented by TD in collaboration with Rio Tinto Alcan, are sold-out since three weeks ago.

We can thank André Ménard for the opportunity to finally enjoy Diana Krall in a rare solo full length concert performance. The artistic director and co-founder of the Festival-ever in search of a new challenge-dearly wanted to present the celebrated pianist in this format, after having watched the "Toronto Becel Benefit Performance" included in a 2-DVD special edition of Krall's "Live in Rio." His sensibility was most persuasive, because when choosing from among Ménard's propositions, Krall seized upon the most intimate, the most alluring and exciting and will perform solo onstage.

The Festival has been present for every major moment in Diana Krall's career, playing an active role in her evolution: from her first appearance, shy and reserved, through to the confident, mature artist we recognize today. We fondly recall every stage in the remarkable history of this brilliant artist at this the Festival: her very first appearance in 1995-a dazzling debut!-performing a 10-night residency with a trio tribute to the legendary Nat King Cole; her first filmed concert the following year, in the sorely-missed Spectrum; her Salle Wilfrid-Pelletier premiere in 1998; her stunning gala with 30 musicians in 1999; and, finally, the unforgettable pinnacle of her Festival shows, the grand 2004 gala celebrating the 25th anniversary of the Festival, with Diana in the Centre Bell with guest Elvis Costello.

After far too long away from the Festival, Krall returns "home", for three nights rather than one-a unique and special event since she rarely plays multiple nights on the same stage! It's an irresistible opportunity to experience raw talent in its most unadorned expression-a talent that led us to select Diana Krall from among literally thousands of musicians to join the closed circle of 24 immortal Festival legends shining from the windows of the eastern facade of the Maison du Festival Rio Tinto Alcan.