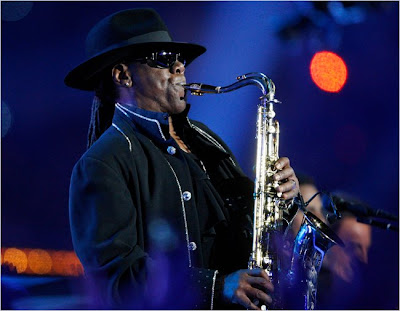 Clarence Clemons, the saxophonist in Bruce Springsteen’s E Street Band, whose jovial onstage manner, soul-rooted style and brotherly relationship with Mr. Springsteen made him one of rock’s most beloved sidemen, died on Saturday at a hospital in Palm Beach, Fla. He was 69.

The cause was complications of a stroke he suffered last Sunday at his home in Singer Island, Fla., a spokeswoman for Mr. Springsteen said.

“With Clarence at my side, my band and I were able to tell a story far deeper than those simply contained in our music,” he added. “His life, his memory and his love will live on in that story and in our band.”

From the beginnings of the E Street Band in 1972, Mr. Clemons played a central part in Mr. Springsteen’s music, complementing the group’s electric guitar and driving rhythms in songs like “Born to Run” and “Tenth Avenue Freeze-Out” with muscular, melodic saxophone hooks that echoed doo-wop, soul and early rock ’n’ roll.

But equally important to the group’s image was the sense of affection and unbreakable camaraderie between Mr. Springsteen and his sax man. Few E Street Band shows were complete without a shaggy-dog story about the stormy night the two men met at a bar in Asbury Park, N.J., or a long bear hug between them at the end of the night.

Mr. Clemons also became something of a celebrity in his own right, acting in Martin Scorsese’s “New York, New York” and other films, and on television shows like “Diff’rent Strokes,” and jamming with President Bill Clinton at the 1993 inaugural ball.

A former college football player, Mr. Clemons towered over Mr. Springsteen at 6 feet 4 inches and about 250 pounds — his self-evident nickname was the Big Man — and for most of its history, he stood out as the sole black man in a white, working-class New Jersey rock band. (The keyboardist David Sancious, who is also black, played with the group until 1974.) Onstage he had almost as much magnetism as Mr. Springsteen, and even if much of his time was spent hitting a cowbell or singing backup, he could still stir up a stadium crowd with a few cheerful notes on his horn.

For many fans, the bond between Mr. Springsteen and Mr. Clemons was symbolized by the photograph wrapped around the front and back covers of the 1975 album “Born to Run.” In that picture, a spent yet elated Mr. Springsteen leans on a shoulder to his right for support; the flip side revealed that it belonged to Mr. Clemons.

“When you look at just the cover of ‘Born to Run,’ you see a charming photo, a good album cover, but when you open it up and see Clarence and me together, the album begins to work its magic,” Mr. Springsteen wrote in a foreword to “Big Man: Real Life and Tall Tales,” Mr. Clemons’s semifictional memoir from 2009, written with Don Reo. “Who are these guys? Where did they come from? What is the joke they are sharing?”

Clarence Anicholas Clemons was born on Jan. 11, 1942, in Norfolk, Va. His father owned a fish market and his grandfather was a Southern Baptist preacher, and although he grew up surrounded by gospel music, the young Mr. Clemons was captivated by rock ’n’ roll. He was given an alto saxophone at age 9 as a Christmas gift; later, following the influence of King Curtis — whose many credits include the jaunty sax part on the Coasters’ 1958 hit “Yakety Yak” — he switched to the tenor.

“I grew up with a very religious background,” he once said in an interview. “I got into the soul music, but I wanted to rock. I was a rocker. I was a born rock ’n’ roll sax player.”

Mr. Clemons was also a gifted athlete, and he attended Maryland State College (now the University of Maryland Eastern Shore) on a scholarship for football and music. He tried out for the Dallas Cowboys and the Cleveland Browns, but a knee injury ended his hopes for a football career.

He was working as a youth counselor in Newark when he began to mix with the Jersey Shore music scene of the late 1960s and early ’70s. He was older than Mr. Springsteen and most of his future band mates, and he often commented on the oddity — even the liability — of being a racially integrated group in those days.

“You had your black bands and you had your white bands,” he wrote in his memoir, “and if you mixed the two you found less places to play.”

But the match was strong from the start, and his saxophone soon became a focal point of the group’s sound. In an interview with The New York Times in 2005, Jon Landau, Mr. Springsteen’s manager, said that during the recording sessions for “Born to Run,” Mr. Springsteen and Mr. Clemons spent 16 hours finessing the jazzy saxophone solo on that album’s closing song, “Jungleland.”

Mr. Clemons’s charisma and eccentricity extended offstage. Wherever the band played, he made his dressing room into a shrine he called the Temple of Soul. He claimed to have played pool with Fidel Castro and won. And by many accounts, including his own, he was a champion partier on the road. He was married five times and divorced four. His fifth wife, Victoria, survives him, as do four sons: Clarence Jr., Charles, Christopher and Jarod.

Mr. Springsteen put the E Street Band on hiatus on 1989, and apart from reuniting for a recording session in 1995, the group did not play again until 1999. But by the mid-1980s, when Mr. Springsteen reached his commercial peak, Mr. Clemons had already found fame on his own. In 1985 he had a Top 20 hit with “You’re a Friend of Mine,” on which he sang with Jackson Browne, and played saxophone on records by Aretha Franklin and Twisted Sister. Recently he was featured on Lady Gaga’s album “Born This Way.”

“I swear I will never forget that moment,” Mr. Clemons later recalled in an interview. “I felt like I was supposed to be there. It was a magical moment. He looked at me, and I looked at him, and we fell in love. And that’s still there.”

A version of this article appeared in print on June 19, 2011, on page A24 of the New York edition with the headline: Clarence Clemons, Springsteen’s Soulful Sideman, Dies at 69.
Posted by Arnaldo DeSouteiro at 12:20 PM