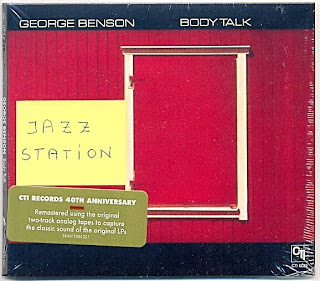 Benson's playing throughout the album is impeccable, the rhythm section sounds OK, but Benson's compositions, although nice, are not so memorable. The arrangements are "simple," to say the least, and for my taste they are all simplistic, with rumidentary funky riffs. That's why "Body Talk" can't be compared to "White Rabbit" neither "Bad Benson," both with a great repertoire magnificently scored by Don Sebesky.

The opening track, "Dance," is basically a guitar improvisation built upon a funky vamp with a frenetic (or annoying, depending of the listener's taste) guitar riff. Btw, Earl Klugh is heard on the rhythm guitar in several tracks, changing to an amplified acoustic guitar on a delightful version of Donny Hatthaway-Gene McDaniels' "When Love Has Grown," which also features a short solo by Harold Mabern on Fender Rhodes; actually, his only solo spot on the album. Mobutu is credited as playing "Percussion," but don't expect something like Airto's arsenal because he uses only one percussion instrument: congas.

Regarding the liner photo, it was pictured by Steve Salmieri during the photo sessions at The Lotos Club in NYC for Don Sebesky's "Giant Box" masterpiece. And the cover photo is the less impressive Pete Turner pic ever.

The previous U.S. CD reissue of "Body Talk" (issued in 1989 as CBS 45222), produced by Didier Deutsch, had been entirely remixed - by Larry Keyes @ CBS Studios, NYC - from the multi-track tapes. Didier also changed the track-sequence, opening with the tracks from the Side B of the 1973 vinyl release. An alternate take of the title track was added as well.

Now, the 2011 CD reissue (produced by Richard Seidel) uses the original two-track tapes recorded & mixed by Rudy Van Gelder. That's why the new CD sounds exactly like the original LP version. The remastering was done by Mark Wilder & Maria Triana @ Battery Studios, NYC. The only track not mixed by Van Gelder is the alternate take of "Body Talk," track 6 of the CD - Seidel decided to use the same mix done in 1989 by Larry Keyes (uncredited on this new CD version.) But all other 5 tracks sound exactly like the original LP.

The same "problem" that CTI fans noticed on "Body Talk," when it reappeared in digital format back in 1989, happened in many other CTI CDs reissued in the U.S. by CBS between 1987 and 1990, since Didier decided to ignore Van Gelder's original two-track mixed tapes and remixed everything. That's why the CD reissues of such albums as Freddie Hubbard's "Sky Dive" and Antonio Carlos Jobim's "Stone Flower" sound very different from the original albums and different from the Japanese reissues which used Van Gelder's two-track mixed tapes. Some tracks were extended, like "Povo" (from "Sky Dive") on which Keith Jarrett's Fender Rhodes solo had been edited (shortned) on the vinyl LP, but can be heard on its entirety on the 1988 CD. Didier also added two versions of "Naturally," but both sound completely different from the original one heard on the "Polar AC" album of out-takes. To listen to the "real" mix of "Naturally," you need to purchase a Japanese reissue of "Polar AC".

I personally would love to hear all the original CTI multi-track tapes digitally remixed by Van Gelder, something that never happened yet...(RVG remastered a series of 20 CTI CDs produced by Creed Taylor himself for the Japanese market in 2009, but used the original two-track mixes because neither him or King Records had access to the multi-track masters that now belong to Sony.)

Posted by Arnaldo DeSouteiro at 12:21 PM