Vocal CD of the Month - "Chris Conway: Out Of The Blue" 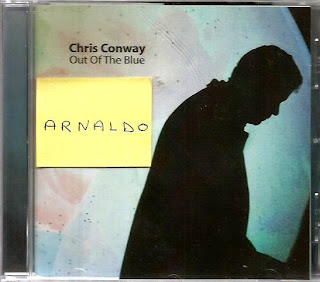 One of my favorite "acts" in the contemporary music scene, the UK-based North American composer, singer and multi-instrumentalist Chris Conway is a complete artist. His impressive discography shows that he is capable to travel through pop, jazz, bossa, new-age, ambient, avant-garde... any "style" you can name. With no prejudice, he ignores boundaries with true hipness. This new album reveals, in some tracks like "Lost In My Mind," the influence of Michael Franks. But Conway is his own man, and a very wise one that doesn't mix all the ingredients in the same album. He knows that each project has its own soul. He lists "Out Of The Blue" among his two dozens of "songs albums." So, sit back, relax, and enjoy.

In Conway's own words:
"A reflective album - looking back to find a way forward. Ballads, bossas, and some singer-songwriter roots songs with a touch of the wistful about them.

I had reached a reflective point in my life. I was a bit blue, to be honest, and this album came out of the blue one gloomy winter.

The songs I had to to hand came from diverse origins. In the end they included...
- my versions of 2 songs of mine that Vikki Clayton had sung and recorded.
- 4 new songs, 2 of which are bossas
- 5 songs from a file dating back 20 years. I've drawn on this file also on Time Traveller.
- 1 hybrid of a 20+year old song with new additions and music.
- 1 song left over from 2011's Time Traveller album sessions.
- an instrumental interlude...

Depite the different origins, dates and styles, somehow a similar vibe came though as I worked on the album. Reflective, yes, but with a glow to it. Looking back to find a better way forward.
Funnily enough, when I finished recording the album I was out of the blue..."