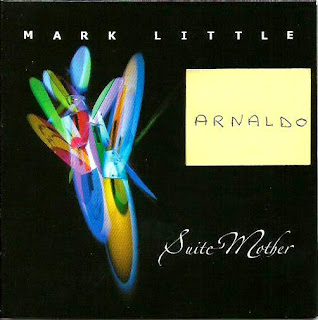 After the wondrous trio project "Kindred Spirits," which mixed strong originals with creative renditions of jazz and bossa nova standards, Mark Little releases a new impressive album focused exclusively on his own tunes, "Suite Mother." The highlights are "Melodious Phunk," actually a frenetic 21st century hard-bop, "Rebirth," "One For Clare" and the project centerpiece, "Suite Mother," dedicated to his late mother Nadyne Little-Williams. The trio format from the previous album (that also included bassist Mike Porter) was expanded to a sextet, with a powerful contribution by Yellowjackets' drummer Will Kennedy and inspired solos by Joe Caploe, Ron Wilkins (shining on the seldom used euphonium), and Rich Oppenheim.

Mark Little's recording career  is moving in a fine fashion fueled by a rare combination of talents as a composer, arranger, performer & producer. "Since my Mothers passing, she has gotten a job in Heaven as a "muse". I know this because of the deluge of inspiration I've received. Song after song after song. This is the first in what will be several CD's presenting this incredible music. God Bless you Mother," says Mark.

On his continued search for excellence, Mark was chosen by musical great Bill Evans, who contributed to the development of Mark's original sound. Bill's advice to Mark, "Listen to the inner voices" ...& dig Mozart. And as Mark remembers, he emphasized music as a statement...a communication from the soul of the musician. The message understood. From Mark's heart springs vibrant images displaying his personal visions of life with his masterful style.

"He is a master of anthem jazz," Phil Elwood wrote on the San Francisco Examiner. "I've had the pleasure of working with Mark Little but it's particulary exciting to hear him stretching out on his own. He's a fine player, with an individual jazz style and he deserves wider recognition," Steve Allen stated. Mark's CD's can be found at his web site www.littlejazz88.com as well as through CDBaby.
***********
Mark was born August 28, 1951 in Amarillo, Texas. He began piano lessons at four, and played his first professional gig at six. He joined an R & B group “The Undertakers” at 14, touring with them for four years. Mark moved to Austin in 1970, and played with numerous groups including Willie Nelson, Stevie Ray Vaughn, Willis Allen Ramsey & Jerry Jeff Walker. He received a scholarship from Berklee School of Music where he got the chance to study with Bill Evans. Little adds that studying with Bill Evans was a “once in a lifetime incredible experience”. He (Bill Evans) talked extensively about developing the “inner voice’s” of the piano and sited Mozart as an example of this technique. By 1975, Mark was teaching at Berklee.

In 1980, Mark moved to California and got the job playing piano for Cleo Lane and John Dankworth, performing with them at many venues including Carnegie Hall, Lincoln Center in New York City, the Dorothy Chandler Pavilion in Los Angeles and Royal Albert Hall in London.

He composed and arranged for Bobby McFerrin, as well as performing with him at the Playboy Jazz Festival in Los Angeles. He toured the United States and Europe with Maria Muldaur, working at Fat Tuesday’s in New York City and Ronnie Scott’s in London, among other places. On tour with Art Farmer and Clifford Jordan, Mark played the hottest clubs on the West Coast including Yoshi’s in San Francisco.

He “tenured” as the musical director and pianist for E.W. Wainwrights African Roots of Jazz. During which time he did special “command performances” for Nelson Mandela , Danny Glover and Louis Farrakhan.

He recorded his first album as a leader, “Dreamwalk’n” in 1993 on the Monarch label and received his first Grammy nomination. Little’s second CD, “The Tribe” was recorded in 1995 again for Monarch, and gave Little his second Grammy nomination. His third CD, “Birthright,” was a solo live performance at the famous Maybeck Recital Hall released in 1999.

Little’s 2003 CD, “Isn’t Art It!” released on his own label “Caralittle Music” is all original compositions dedicated to the life and work of his brother Ken Little which demonstrates Mark’s versatility of styles and creativity.

Mark moved to San Antonio in 2004 and has played with singer Beata Pater as well as with numerous groups including his brother Ken Little’s band, Richie Cole’s Alto Madness orchestra and Kyle Kyner’s Small World with Polly Harrison and Richard Oppenheim.

In the words of Mark’s old friend the late, great, John Dankworth, “Mark Little’s spirited playing amply demonstrates his total immersion in the music he loves, not to mention his wholehearted commitment to it. His fluent improvisations explore ever-changing routes with a surprise around nearly every corner; they sometimes display extraordinary virtuosity and sometimes almost disarming simplicity, yet are never devoid of interest. He shows himself to be an exciting performer whose work is still developing; this bodes well for the future of this highly individual artiste.”
Posted by Arnaldo DeSouteiro at 10:02 PM