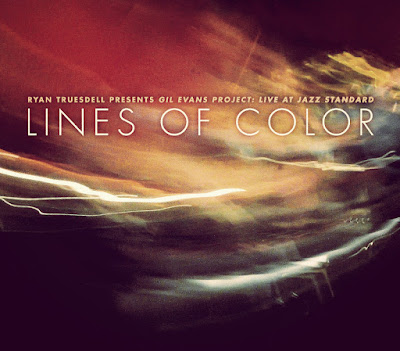 "An unbelievable album. The band's performance is incredible; precise and energetic. Gil would be proud of what Ryan has done." - Bruce Lundvall, Chairman Emeritus of Blue Note Records

"4 1/2-stars. Superb renderings of some of the finest writing of the postwar big band period.... Players are uniformly excellent, but the star 'soloist' is the elegant ensemble amalgams that Truesdell found hiding among brass and reeds that others had missed. He makes familiar material worth hearing again. Buy it." -- John McDonough, DownBeat

Composer/producer/conductor Ryan Truesdell returns to the Jazz Standard with his award-winning Gil Evans Project for its fourth annual residency Thursday, May 14 - Sunday, May 17, 2015. The performances celebrate their triumphant sophomore album LINES OF COLOR: Live at Jazz Standard on the newly-formed Blue Note/ArtistShare label (www.GilEvansProject.com). The band will be debuting selections from the new CD, as well as other rarely performed works from Gil Evans' catalog - including music from the albums New Bottle Old Wine, Great Jazz Standards, Individualism of Gil Evans, and more. Sets at 7:30 and 10 p.m. with an additional set at 11:45 p.m. on Friday and Saturday nights. Tickets $30 - $35.  The Jazz Standard, 116 E. 27h Street, New York City. 212-576-2232. http://www.jazzstandard.com/

LINES OF COLOR was recorded during the Gil Evans Project's annual week-long engagement at Jazz Standard in New York City from May 13-18, 2014. It consists of six newly discovered, never before recorded works (including "Avalon Town," "Can't We Talk It Over," and "Just One Of Those Things"), two arrangements with previously unheard sections ("Davenport Blues" and "Sunday Drivin'"), and three of Evans' well-known charts from his classic albums ("Time of the Barracudas," "Concorde," and "Greensleeves"). Throughout the engagement, the Gil Evans Project presented nearly fifty of Evans' works, most of which were performed live for the first time. Truesdell decided to record live for the Gil Evans Project's second album to honor the essence of Evans' music that craves live performance. "It allows Gil's colors and the overtones of the music to sound and blend in the room in a way that you can't get from a close-mic studio recording," says Truesdell.

"Live recording captures this intangible energy that's created when music is performed for an audience. It gives listeners a sense of the magic that happens when the notes are lifted off the page by these amazing musicians."

The eleven selections that make up LINES OF COLOR represent everything you hope for in a live recording: a beautiful sound, a lively, involved audience, and precise and inspired performances of remarkable music. Of this collection, six of the charts were originally written during Evans' tenure with the Claude Thornhill orchestra, including never-before-heard arrangements of "How High the Moon," "Avalon Town," and a rare Evans original composition, "Gypsy Jump," written in 1942. A fun tune with an unusual 36-bar form, "Gypsy Jump" seems to show a slight influence from the "Arabian Dance" from Tchaikovsky's Nutcracker, also arranged by Evans for Thornhill during this time. "Can't We Talk It Over," a gorgeous ballad from the Thornhill Orchestra's late 1940s repertoire, illustrates Evans' strong bebop influences as evidenced by a direct musical quote from a Charlie

Parker solo. It is a wonderful feature for the Gil Evans Project's resident vocalist, Wendy Gilles. Bruce Lundvall, Chairman Emeritus of Blue Note Records said, "Wendy has an amazing voice which is a perfect fit for this music."

Two charts on the record represent the middle of Evans' career; one of which he and his band never recorded, and only performed once. In the spring of 1959, Evans and his orchestra played the famous Apollo Theater in Harlem, sharing the billing with Dinah Washington and Thelonious Monk. For this concert, Evans chose to revisit a few charts from his past, including Cole Porter's "Just One of Those Things," which was based on the arrangement Evans did for his first album as a leader in 1957, Gil Evans + 10. Ever the reviser, Evans took the opportunity to do a bit of rearranging as well as re-orchestrating the chart to fit the instrumentation for the concert. The Gil Evans Project's first-time recording of this great Evans arrangement features incredible solos from Steve Wilson on soprano, trombonist Ryan Keberle, and pianist Frank Kimbrough.

The other tune from this era is Evans' great adaptation of Bix Beiderbecke's "Davenport Blues," originally recorded on the 1959 album, Great Jazz Standards. "I was ecstatic when I discovered Gil's score to "Davenport," says Truesdell. "There were four pages in the middle of the score that were omitted from the original version. I'm thrilled we were able to record the entire chart as Gil first conceived it." Rather than imitating trumpet soloist Johnny Coles' definitive performance on Evans' Great Jazz Standards album, Truesdell decided to take a slightly different approach. The slower tempo and Lewis Nash's heavy, slightly dirty swing feel emphasizes the bluesy elements and perfectly articulates Gil's hard-swinging rhythms. "I was blown away by Mat Jodrell's performance; he poured every bit of his soul and personality into the solo and really made it his own," says Truesdell.

Rounding out LINES OF COLOR is a collection of tunes from Evans' output in the mid-1960s, including the Gil Evans Project's dynamic renderings of "Time of the Barracudas," and "Concorde," which both first appeared on the Individualism of Gil Evans recording. "Greensleeves," originally arranged for guitarist Kenny Burrell, receives a fresh take from trombonist Marshall Gilkes, whose unparalleled tone and inventive melodicism uplift this familiar tune and Gil's singular writing.

With LINES OF COLOR, Truesdell has solidified his reputation as one of the foremost Gil Evans scholars, while leading a band of industry giants in an historic and invaluable undertaking. Picking up where the Gil Evans Project's 2013 Grammy award-nominated album CENTENNIAL: Newly Discovered Works of Gil Evans left off, LINES OF COLOR is an exciting glimpse into how Truesdell and his critically acclaimed band are fulfilling the most crucial aspect of his vision: to bring Evans' music to new ears, and to extend his legacy into the 21st century.

Available on iTunes and at www.GilEvansProject.com