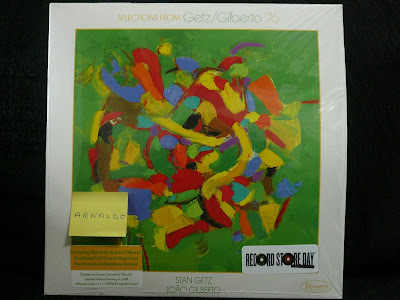 This is not a reissue nor a "new recording", of course, but it's a fantastic new release! As we had anticipated here in January, George Klabin's California-based Resonance Records will be releasing "Selections from Getz/Gilberto '76" on April 18, to celebrate the Record Store Day. We just got our copy and we are in heaven, listening to four magical tracks from a musical miracle. For now, it's available only as 10-inch audiophile vinyl LP, but the full album will come out on CD and 2-LP sets probably in time to celebrate Joao Gilberto's 84th birthday (June 10).

The cover reminds me of my childhood, when I used to listen to a lot of 10-inch LPs from my parents' collections: albums by Art Tatum, Hazel Scott, Art Van Damme, George Shearing, the long forgotten Brazilian guitar genius Nestor Campos, and Frank Sinatra (such masterpieces as "Swing Easy!" and "Songs For Young Lovers"), among many many others. Most of them had 8 tracks, 4 per side. "Selections from Getz/Gilberto '76" has 4 tracks, 2 per side. "É Preciso Perdoar" and "Doralice" on Side A, "Eu Vim Da Bahia" and "Retrato Em Branco E Preto" on Side B.

Btw, the composers are not credited anywhere. No credits to them on the back cover neither on the labels...

This collector's LP (with a limited & numbered edition of 3,000 units) is pressed on translucent green-colored 140 gram vinyl at 33 1/3 rpm by Erika Records. The repertoire includes Dorival Caymmi's "Doralice" (recorded by João & Getz in 1963 for the historical "Getz/Gilberto"), and three songs covered by them on "The Best of Two Worlds" for CBS in 1976: "É Preciso Perdoar (Alcyvando Luz/Carlos Coqueijo Costa), "Eu Vim da Bahia" (Gilberto Gil), and "Retrato Em Branco E Preto" (Antonio Carlos Jobim/Chico Buarque), the latter also included by Gilberto on another masterpiece, the "Amoroso" album for Warner in 1977.

The LP has been eagerly awaited by Getz's and Gilberto's fans since we first posted about it four months ago, and the stores expect even better sales than another impressive Gilberto album, "Um Encontro No Au Bon Gourmet," released by the Italian label Doxy (specialized in Public Domain recordings) as announced here last February.

Stan Getz and João Gilberto reunite in 1976 with these previously unreleased recordings from a four-night engagement at San Francisco's Keystone Korner, "Selections from Getz/Gilberto '76." This record commemorates performances that are one of the few times this duo collaborated in the 1970's, after their multiple Grammy award-winning 'Getz/Gilberto" released by Verve in 1964, and soon after their second studio reunion on "The Best Of Two Worlds" in 1976.
​
Resonance acquired the tapes from jazz impresario Todd Barkan, owner of the now-defunct (but very famous in the 70s) Keystone Korner jazz club in SF. They cleared rights with the Stan Getz Estate and the other musicians, including Joao Gilberto. As the title suggests, this is a sneak peak of the upcoming full length "Getz/Gilberto '76" due for release (CD & 2-LP sets) in June.

On April 18, Resonance will also release a set by guitar wiz Wes Montgomery with pianist Eddie Higgins Trio ("One Night In Indy," cut on January 18, 1959) and another one by master organist Larry Young ("Selections From In Paris: The ORTF Recordings," recorded in 1964 and 1965. Famous for his sessions with Tony Williams and Miles Davis, the late (and much missed) Young will have his full album released probably only by the end of 2015. For more details, please check:
http://jazzstation-oblogdearnaldodesouteiros.blogspot.com.br/2015/01/new-cds-by-stan-getz-joao-gilberto-wes.html 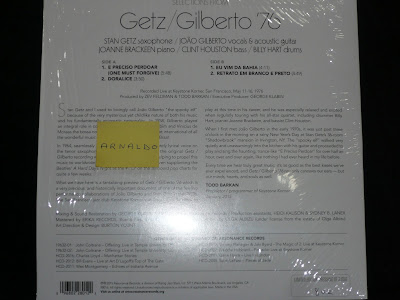