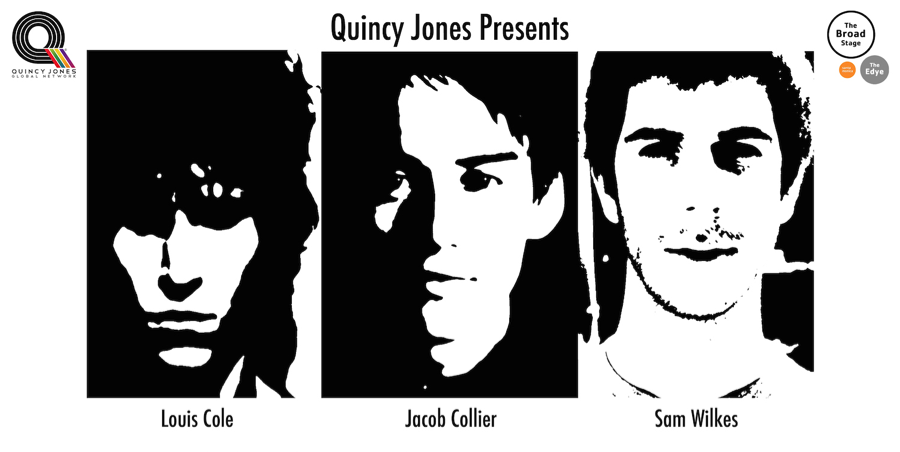 "I have never in my life seen a talent like this. One of my favorite young artists on the planet-absolutely mind-blowing" - Quincy Jones

"Your music is legend, Jacob...I want to be like you when I grow up" - Peter Erskine

"Wow, Jacob. Your stuff is amazing" - Herbie Hancock
**********
As part of the Quincy Jones Presents Series, the legendary producer invites you to enjoy a night of insane talent and unbelievable music making.

Jacob Collier is recognized as one of the world's most unique and gifted young musicians. Based in London, UK, Jacob combines elements of musics such as Jazz, A cappella, Groove, Folk, Trip-hop, Classical, Brazilian, Gospel, Soul and Improvisation, which culminate to create his distinctive and revolutionary sound. Since sharing some of these sounds with the world, Jacob's online social channels have garnered over 60K international subscribers and over 3.5 million video views. With viral hits such as his rendition of the Stevie Wonder classic, "Don't You Worry 'Bout A Thing," Jacob has gained luminary fans among the highest realms of the world's music community, including Quincy Jones, Herbie Hancock, Pat Metheny, Chick Corea, Steve Vai, Take 6, to name a few. Jacob is currently tending to an album, and designing and building a groundbreaking live solo performance vehicle, with which he will soon be touring Earth.

Louis Cole is one half of cult electronic funk-pop duo, Knower. A drummer and music creator from Los Angeles, Louis' mission is to create deep feelings through music. He has a lot of music on the internet under his own name as well as his band, KNOWER. His music consists of Insanely Heavy Funk, deep ballads, and other kinds of music in between. Some people describe his style as "Tron Melt" which is an up-and-coming sound from Los Angeles in 2015.

Sam Wilkes is a bassist, producer, musical director, and synthesizer enthusiast. After graduating from USC's Popular Music Performance Program, Sam stayed in Los Angeles where he creates and produces music with many different artists. Principally, he is one half of the indie rock duo pratley and is the musical director for pop-soul artist Rozzi Crane. Sam has performed in many different venues from the Troubadour to Madison Square Garden. He is also an avid record collector who frequently DJ's and studies liner notes. Sam will be releasing a lot of music on the Internet in 2015.
Posted by Arnaldo DeSouteiro at 11:32 AM