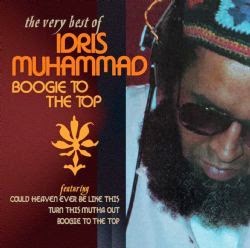 The title is the same of Idris Muhammad's fourth and final album for CTI/Kudu, "Boogie To The Top." But it's not the eagerly awaited reissue of that jazz-funk-disco gem. Instead, a compilation to be released on May 11 by Cherry Red's subsidiary label Él Records, including tunes from all of Idris' albums recorded under Creed Taylor's supervision from 1974 to 1978.

During that period, Idris recorded four dates as a leader for Kudu, This colletion starts with two tracks from the 1974 masterpiece "Power Of Soul," produced by Creed Taylor, engineered by Rudy Van Gelder and arranged by Bob James: the laidback danceflor hit "Loran's Dance" (released on CD for the first time in a groundbreaking compilation produced by Arnaldo DeSouteiro in 1997, "CTI Acid Jazz Grooves") and Jimi Hendrix's title song, "Power Of Soul," featuring great performances by Joe Beck, Gary King, Randy Brecker, Ralph MacDonald and Grover Washington, Jr. Grover's "Loran’s Dance" was sampled by both The Beastie Boys ("For All The Girl’s") and Fatboy Slim ("The Weekend Starts Here".)

Three songs were picked from the "House of the Rising Sun" album, also produced by Taylor, but arranged by former James Brown's musical director, David Matthews: the title track, an adaptation of Chopin's "Prelude in E Minor Op. 28 No. 4," and a surprising disco version of Ary Barroso's "Bahia" (Na Baixa do Sapateiro), a tune covered by many jazz stars from John Coltrane to Lalo Schifrin. Among the musicians on those 1976 sessions were Roland Hanna, Leon Pendarvis, Don Grolnick, Fred Wesley and Eric Gale.

At the time of the 1977 sessions for the "Turn This Mutha Out" album, David Matthews successfuly handled both the production and arrangements. He also wrote all the tunes for the project, which included "Crab Apple," "Turn This Mutha Out" and the much-sampled dancefloor classic "Could Heaven Ever Be Like This" (with lyrics by Tony Sarafino), the three tracks selected for this compilation. Hiram Bullock, Randy Brecker, Michael Brecker, Rubens Bassini, Gloria Agostini, Wilbur Bascomb and Jeremy Steig are listed as sidemen.

Idris' last album for Kudu came in 1978, once again entirely directed by Matthews: "Boogie To The Top." Two tracks were culled from it: the raw & wild funk "Stick It In Your Face" and the title track. Cliff Carter, Nicky Marrero, Will Lee, Sammy Figueroa, Ronnie Cuber, Gloria Agostini, Hugh McCracken and Horam Bullock were also on board.

This collection includes, as bonus tracks, the 7” single versions of "Boogie To The Top," "Could Heaven Ever Be Like This" (sampled by Jamiroquai on "Alright," amongst others) and "Turn This Mutha Out." Charles Waring, a collaborator for Mojo and Record Collector magazines, signs the liner notes.
Posted by Arnaldo DeSouteiro at 10:04 PM