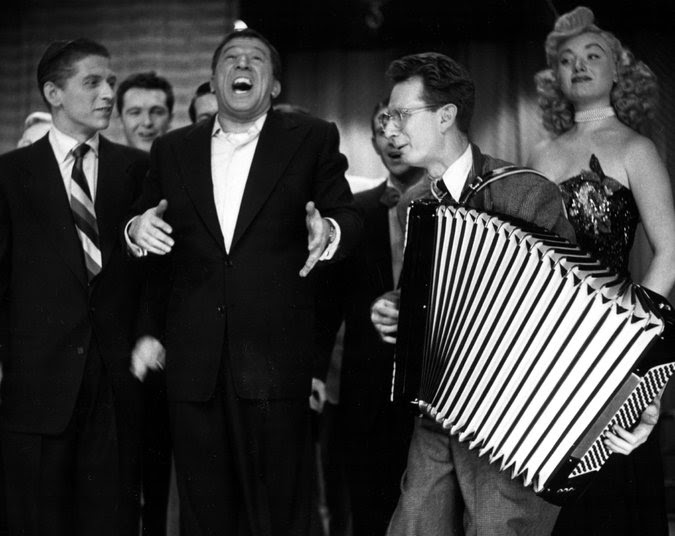 Milton Delugg, who accompanied Al Jolson on the accordion, co-wrote the Nat King Cole hit “Orange Colored Sky,” conducted the band for Johnny Carson’s “The Tonight Show” and was musical director of the Macy’s Thanksgiving Day Parade for three decades, died on April 6 at his home in Los Angeles. He was 96.

The cause was heart failure, his son Michael said.

Mr. Delugg dutifully took piano lessons as a child, but his eclectic musical career was kindled when he was a young teenager and his father noticed a store-window advertisement offering an accordion and six free lessons for $68.

Young Milton played jazz accordion gigs, trying to break into the business, but he also enrolled in an accounting course at Los Angeles Junior College in case his music career did not work out. He dropped out when he was hired by the staff orchestra at Paramount studios.

It was the first of what he described as a series of lucky breaks in a career that spanned eight decades and collaborations with, among others, Frank Loesser, the songwriter; Abe Burrows, the director and humorist; Paul Winchell, the ventriloquist; and Chuck Barris, the producer of game shows including “The Gong Show,” the farcical “talent” contest for which Mr. Delugg was the bandleader.

Mr. Delugg was born in Los Angeles on Dec. 2, 1918, to Samuel Delugg, a meat wholesaler, and the former Mollie Seltzer, a homemaker. He married Anna Mae Renfer, with whom he had two sons, Michael and Stephen, who survive him.

In 1939, Mr. Delugg joined Matty Malneck’s orchestra, which performed on Broadway that year in the Jerome Kern-Oscar Hammerstein II musical “Very Warm for May.” The show bombed. “There has seldom been a book that fought entertainment as successfully as the story of this musical play,” Brooks Atkinson wrote in The New York Times.

After enlisting in the Army Air Corps radio production unit during World War II, Mr. Delugg directed the music for radio shows in New York. He was among Jolson’s last accompanists before the singer’s death in 1950. That same year he became the bandleader for “Broadway Open House,” a precursor to “The Tonight Show” hosted by the comedian Jerry Lester. It was perhaps the first late-night show on network television.

“Nothing else was on at 11 o’clock,” Mr. Delugg recalled in a 2008 interview with the Archive of American Television. “You had to listen to ‘Broadway Open House.’ ”

“Orange Colored Sky,” which he wrote with Willie Stein, was played on the show and later recorded by Nat King Cole. It was one of the first songs to become a hit because of television.

In 1966, he returned to late-night television as musical director of “The Tonight Show Starring Johnny Carson.” He was there for more than a year, between the much longer tenures of Skitch Henderson and Doc Severinsen.

Through the relationships he developed at NBC, he was hired as the network’s music director for its broadcasts of the Macy’s Thanksgiving Day Parade, a role he played through 2013.

His polka “Hoop Dee Doo” was heard often on “The Gong Show,” on which judges put losing contestants (and audiences) out of their misery in midperformance by striking a large gong. The group he led on that show was known as the Band With a Thug (rhymes with Delugg), and he also appeared as a comic foil.

In the television archives interview, Mr. Delugg recalled that he was given a speaking role on “Broadway Open House” after the episode on which he introduced the buxom actress and model Dagmar. As Mr. Delugg recounted the story:

“I brought Dagmar on the show because Jerry Lester had picked her, and I said, ‘What’s she supposed to do?’  And he said, ‘She’s the girl singer with the band.’ So I introduced her that night.  I said: ‘Jerry, this is Dagmar.  She’s the chick with the band.’  He said, ‘How does she sound?’ And I said, ‘Who cares?’ I guess it was my first laugh. After that, I had lines to do.”

“We never did find out if she could sing,” he said.
Posted by Arnaldo DeSouteiro at 11:32 AM