News from the Jazzinstitut Darmstadt 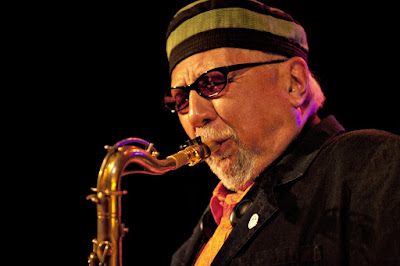 Ethan Iverson listens to Warne Marsh 's solo on "Confirmation", recorded in 1975, transcribes it, too, and points out that Marsh should have been much better known than he actually was ( Do the Math). --- The Melbourne Herald Sun shares some photos from their archives documenting the Australian city's late 1940s / early 1950s jazz scene, including a picture of visiting American trumpeter Rex Stewart ( Herald Sun).

Abby Phillip ( Washington Post) and Avianne Tan ( ABC News) report about the 102-year-old Alice Barker, a former chorus line dancer at the Apollo, the Cotton Club and the Zanzibar who also participated in a couple of film shorts (soundies) in the 1930s and 1940s, and who recently was presented with some of these films "for the first time" at her Brooklyn nursing home. --- Florian Bissig reports about the New Harlem Ramblers, a Swiss ensemble playing traditional jazz since 1969 and one of the few bands in Switzerland that still perform music in the style of Louis Armstrong, King Oliver or Eddie Condon ( Neue Zürcher Zeitung). Dixieland does not have a broad audience anymore, complain the band members, and their listeners usually are as old as the musicians themselves who before retirement all made their living from non-jazz jobs.

Joe Cole talks to the saxophonist Charles Lloyd who just received a NEA Jazz Masters award about the importance of living "in the now", about living and playing in the Santa Barbara area, about the current draught in California, about not taking success and recognition for granted, about studying at the University of Southern California in the late 1950s, about his love for opera, and about his latest album "Wild Man Dance" ( Santa Barbara Independent). --- Amanda Logan talks to the singer Ranee Lee about the changing beauty of improvisation, about music as universal communication and about being grateful for the gifts that make up her "me", her own artistic and personal being ( Leader-Post).

The German trumpeter Uli Beckerhoff reflects about how the trade fair JazzAhead which took place last weekend has changed the jazz scene ( Radio Bremen). Tom R. Schulz ( Hamburger Abendblatt), Christian Emigholz ( Weser-Kurier) and Uwe Dammann ( Weser-Kurier) report about the JazzAhead. Selected concerts were filmed and can be viewed online ( Arte Concert). --- Peter Kolb talks to the German singer Cécile Verny about her childhood on the Ivory Coast, about the mix of influences from Africa, France and Germany in her music, about the challenges of different languages for singing songs in them, about the importance of faith for herself and her music, about the hardships of a musicians' life, and about national differences in jazz musicians' reputation ( Westfälische Nachrichten ).

Sandra Pfäfflin talks to the German trumpeter Sebastian Studnitzky about being awarded the Echo Jazz award, about a new album planned for release, and about the XJazz festival he is co-organizing in Berlin ( Pforzheimer Zeitung). --- Ricardo A. Hazell talks to the saxophonist Kirk Whalum about his Christian faith and African spirituality, about the popular appeal of jazz, and about his latest album "The Gospel According to Chapter IV" ( EurWeb).

Ralf Günter ( BZ) and Ulrich Stock ( Die Zeit , online in about 10 days) talk to the German clarinetist Rolf Kühn about his new album which he recorded at the age of 85. --- Nate Chinen hears the saxophonist Tim Berne and his band Snakeoil at New York's Jazz Standard ( New York Times). --- The German journalist Wolf Kampmann was awarded the Award for German Jazz Journalists at JazzAhead trade fair ( Jazz Zeitung). --- Jake Frankenfield talks to the bassist Tom Knific ( The Oberlin Review). --- Ane Hebeisen talks to the journalist Tom Gsteiger and the educator Peter Kraut about the aesthetic status quo of jazz today and its relevance for the future ( Der Bund). --- Molly Sheridan talks to the cellist Erik Friedlander ( New Music Box). --- Dan Ouellette talks to the drummer Brian Blade ( Zeal NYC).

Obituaries
We read more obituaries about ESP-Disk founder Bernard Stollman ( New York Times, The Blue Moment), the saxophonist and arranger Paul Jeffrey ( Duke Chronicle), and the trumpeter Clark Terry ( CBC News). --- We learned of the passing of the Jazz FM chairman Richard Wheatly at the age of 69 ( Mediaweek).

Last Week at the Jazzinstitut
We spent last weekend at the 10th edition of the JazzAhead trade fair in Bremen, participating in official meetings and unofficial conversations. We linked a number of articles and web links about the event above. At JazzAhead it's mostly about meeting in person, and thus, we will certainly be back next year.

One person we met at JazzAhead was Larry Appelbaum, the Library of Congress' jazz curator, who will be part of our new series Mainz Jazz Talks which we will start on Thursday (30 April 2015). During the evening which we called "... with Monk, Coltrane and Dolphy in the depths of the archive" Appelbaum and Wolfram Knauer will discuss the investigative skills it needs to discover surprising material in such institutions. Two short talks will focus on the discovery of a live recording of Thelonious Monk's Carnegie Hall concert with John Coltrane as well as on a collection acquired by the Library of Congress last year containing musical sketches by Eric Dolphy. Apart from the talking there will also be live music, pieces by Monk and Dolphy performed by the saxophonist Thomas Bachmann and students of the jazz department. The event at the Red Salon of the Music Department is free ( Mainzer Jazzgespräche ). The first Mainz Jazz Talk is our joined contribution to this year's International Jazz Day., celebrated around the globe on April 30th

This Friday (1 May) you can hear the two double bassists Sebastian Gramss and Barry Guy in the Jazzinstitut's concert space – invited by the local Förderverein Jazz . Highly recommended!!!

We support the Network Jazz in Hesse in its plans for a "jazz mob" on Monday, 11th May (11:30 am) in the terminal of Frankfurt Main Station. The appeal to participate goes out to musicians in all of the state of Hesse as we want to show how lively the jazz scene of this region actually is ( Netzwerk Jazz in Hessen ). The "Hessenschau", a regional TV magazine, will report as will be the radio stations of the Frankfurt-based Hessischer Rundfunk.

We read ... Luc Bouquet's book "Coltrane sur le vif" as well as Niklaus Troxler's and Olivier Senn's "Willisau and All That Jazz. Eine visuelle Chronik / A Visual History, 1966-2013". The review of these and other books can be found on the book review page of our website.

Jazzinstitut Darmstadt is a municipal cultural institute of the city of Darmstadt, Germany.
Posted by Arnaldo DeSouteiro at 6:50 PM