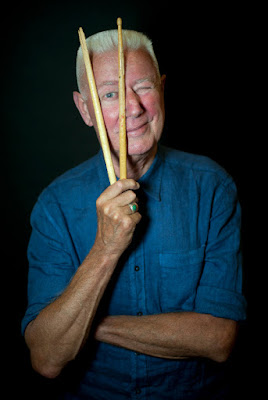 The world-renowned Amsterdam-based Instant Composers Pool (ICP) Orchestra, led by Han Bennink (above), celebrates the release of its recent CD "East of the Sun" with a 13-date US tour, May 2 - 17, 2015.

Since ICP's inception in 1967 and the ICP 001 New Acoustic Swing Duo, the group has toured and recorded widely. It has released a total of 51 recordings, most recently ICP Orchestra (ICP 049) recorded in 3 sessions in 2009,!ICP! 50 (vinyl) and East of the Sun (051), the first release in ICP's 48-year history without pianist and co-founder Misha Mengelberg. But with guest star Guus Janssen at the piano, a handful of stalwart DownBeat Critics Poll honorees on board, and an astonishing repertoire - a different setlist is written every evening by a member of the band "the music--as rich, wobbly, and unpredictable as ever--is still imbued with [Mengelberg's] contrary character." (Guy Peters).

Out November 15, 2014, East of the Sun is earning the highest praise.  As Bruce Lee Gallanter says in Downtown Music Gallery, "There is something magical and distinctive about this ensemble. They seem to have their hands in a wide variety of influences or genres: cartoon or circus music, traditional Dutch melodies, old school swing/jazz, modern classical arrangements, with lots of unexpected twists and turns and solo[s] or small subgroup sections and free eruptions when you least expect them. The quirky and consistently crafty arrangements by different members of the band (especially Mr. Moore) is/are what makes this band unlike any other.... There is only one ICP Orchestra...each and every release is a treasure."

"If there was a facet of jazz expression that the ICP Orchestra didn't address Wednesday night at HotHouse, it probably wasn't worth mentioning. Practically every twist on the music -- from 19th Century ragtime to 21st Century free-form experimentation -- eventually came to the fore, and considering that this magnificent Dutch band has been swinging for decades, the sheer vitality of its explorations into American and European jazz vocabularies may have caught some listeners by surprise. Jazz organizations that last this long don't typically convey as much intellectual curiosity, stylistic reach and technical daring as the ICP (Instant Composers Pool) band did in every piece on its first set. Each of the evening's many miniatures, in fact, bristled with strange and provocative juxtapositions of style and musical language, a blues lament giving way to a series of fierce dissonances, an easy swing tempo abruptly interrupted by passages of seeming rhythmic anarchy...Long may they thunder."-- Howard Reich, Chicago Tribune

Percussionist Han Bennink is one of the central figures of modern jazz in Europe. Combining drama and wit with iconoclastic virtuosity and rhythmic imagination, Bennink's performances are a feast for the eyes as well as the ears.  Over the years, he has collaborated with everyone from Eric Dolphy and Johnny Griffin to Myra Melford, Dave Douglas and Eugene Chadbourne. "Han Bennink explodes every drummer cliché, rambunctiously devouring free-jazz bombast and subtle trad swing." -- Ken Micallef, Modern Drummer.