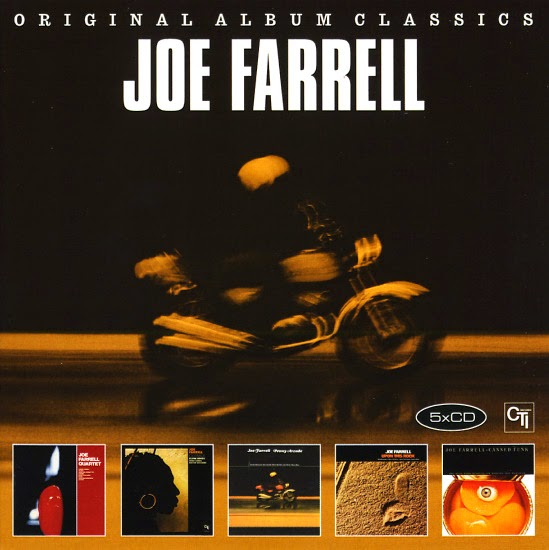 Release Date: March 20, 2015
A CTI powerhouse – five full albums from reedman Joe Farrell, each packaged in a tiny LP-styled sleeve! All sessions produced by Creed Taylor and recorded & mixed at Van Gelder Studio (Englewood Cliffs, New Jersey, USA) by the legendary engineer Rudy Van Gelder. The cover pics are by genius photographer Pete Turner, with great artwork by Bob Ciano, CTI's art director from 1970 to 1975, the heyday of the label.

First up is "Joe Farrell Quartet," his CTI solo debut from 1970, a stellar session that's easily one of the early high points for the legendary Creed Taylor's label. Farrell bursts forth as one heck of a soulful cat -- working on these great modal grooves that slide out wonderfully and really have a sense of flow -- a style that's different than Joe's later material, but equally powerful. Part of the strength of the record comes from the lineup, a key quintet of like-mined up-and-comers that includes Chick Corea on keyboards, John McLaughlin on guitar, Dave Holland on bass, and Jack DeJohnette on drums – players who were also members of Miles Davis' band at that time and that definitely know the farther reaches of jazz, yet hang just on the inside here with Joe, providing some amazing accompaniment for his lines on soprano, tenor, and flute. Titles include the bossa-nova "Molten Glass." the etheral "Song Of The Wind" (Farrell plays the melody on oboe and improvises on the flute in this duet with Chick Corea), the avant-garde jazz rock "Motion," and John McLaughlin's "Follow Your Heart."

Next is "Outback" (1971) – a drawn-out quintet side, with Chick Corea on Fender Rhodes electric piano, Buster Williams on bass, Elvin Jones on drums, and Airto on percussion. Farrell was playing with Jones at the time, and the album's got some of their strong choppy reed/percussion interplay – but with a sharpness and focus that you don't always hear on Elvin's records. The four tracks are all long and include "Outback" (Joe uses multiple flutes), the jazz waltz "Sound Down" (played on soprano sax), Corea's "Bleeding Orchid" (Airto is heard on castanets) and "November 68th" (with a long drum solo by Elvin). The follow-up album was "Moon Germs" (1972), recorded with Herbie Hancock, Stanley Clarke and Jack DeJohnette, but oddly not included on this "Complete" box set.

"Penny Arcade" (1973) has grooves so sharp you could cut your trousers on them! Farrell's angular reed style is in perfect form here, grooving with a small group that includes Herbie Hancock on both acoustic ("Geo Blue") & electric pianos (on all other tracks), Joe Beck on guitar, Herb Bushler on electric bass (acoustic only on "Geo Blue"), Steve Gadd on drums, and Don Alias on congas & cowbell in one track only, "Cloud Cream" – a combo that's got a harder, tighter feel than most CTI groups and a key reason why Joe's records of this time are so legendary. The album features a fantastic version of Stevie Wonder's "Too High" – one that breaks all over the beginning with these riffs by Farrell, then grooves into a CTI electric funk mode for about 13 minutes. Other tracks include "Hurricane Jane," "Geo Blue," "Penny Arcade" and the delightful "Cloud Cream," with Farrell on piccolo.

"Upon This Rock" (1974) is even stronger and wilder, and there's a lean, edgey groove to the set that's totally great – a lot more bite than usual for CTI, thanks to these wonderfully angular lines from Joe on tenor, soprano sax, and flute, backed up with some wicked guitar work from Joe Beck, who really matches Farrell's energy – in a core quartet with Herb Bushler on bass and Jim Madison on drums. "I Won't Be Back," one cut saved by Creed from the previous album, features the group that played on the "Penny Arcade" sessions: Hancock on Fender Rhodes, Bushler on bass, Gadd on drums, and Don Alias on congas. The album includes the much-sampled and massively break-heavy title cut "Upon This Rock", plus "Seven Seas" and "Weathervane".

Last up is "Canned Funk" (1975), a record that's as fresh and freaky as the classic Pete Turner image on the cover. The riffing rhythms get going right from the start – some amazing lines from a rhythm combo that includes Joe Beck on guitar, Herb Bushler on bass, Jim Madison on drums, and the mighty Ray Mantilla on percussion – adding in these extra changes and fills that really get the tunes moving wonderfully – providing a perfect platform for Joe Farrell's wonderful work on tenor, soprano, baritone, and flute. The sax lines are as angular as the rhythms – tight, choppy, and completely funky – no wonder the record's a CTI classic that folks have dug for years. Four wild and long tracks: "Canned Funk," "Animal," "Suite Martinique" and "Spoken Silence." 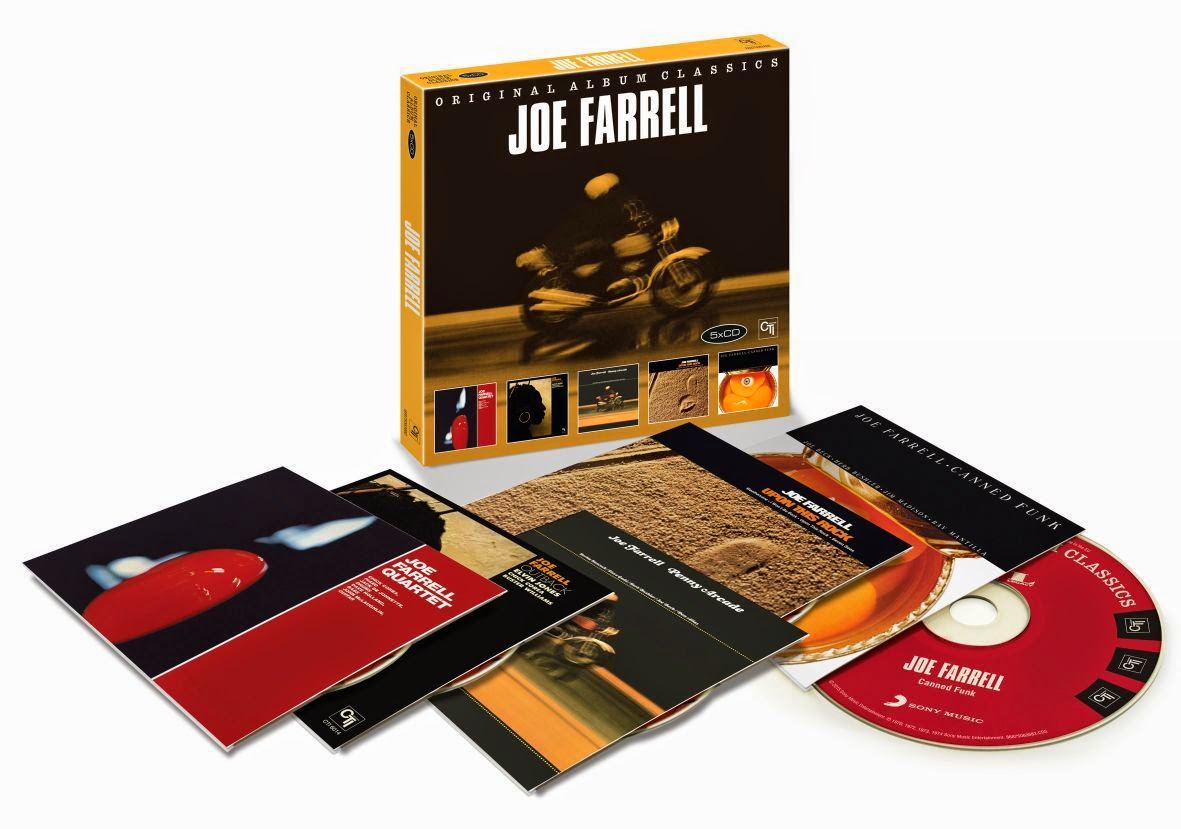 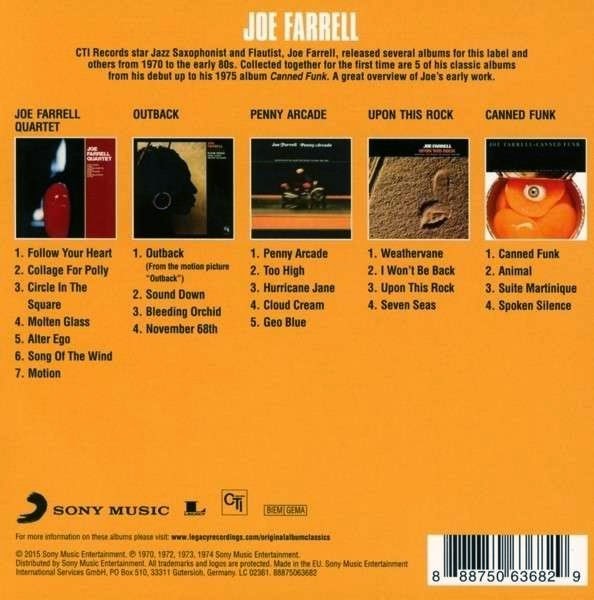 Posted by Arnaldo DeSouteiro at 10:02 PM