Vocal CD of the Month - "Bryan Anthony: A Night Like This" 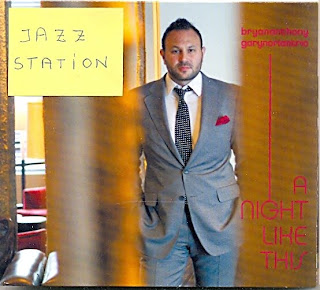 Vocal CD of the Month
Bryan Anthony & Gary Norian Trio: "A Night Like This" (Mercator Media) 2011

Backed by the Gary Norian Trio, vocalist Bryan Anthony's passion for GAS (the Great American Songbook) is in sumptuous display throughout "A Night Like This," his second solo album, recorded & mixed by co-producer Brad Sayles at the studio of a local station, KUHF 88.7 FM (Houston Public Radio), a tradition still common all over Europe, but that disappeared in the U.S.

Highlights: the opener "I'm in the Mood for Love," the two versions of Gary Norian's title track, "Stardust" (one of Hoagy Carmichael's masterpieces), Gordon Jenkins' "This Is All I Ask" (his best ballad along with "Goodbye," both loved by Sinatra), Irving Berlin's "What'll I Do" (it's interesting to compare Anthony's exuberant & impassioned rendition with Chet Baker's introspective singing on his CTI album "She Was Too Good To Me") and another Norian gem, "The One I Most Adore."

"These songs possess such wisdom and poetry about human emotions, the feelings, situations, and dynamics that run through every generation and tie us all together," Anthony says. "I really believe that along with jazz these songs are America's classical music, the greatest gift American culture has provided to the world."

"Gary's gotten to really know my voice and what works for me," says Anthony. "I love 'A Night Like This.' It's very moody, with a sexy vibe almost like a James Bond theme. He wrote it specifically for me to sing and incorporated the things that I do best vocally. It's not the easiest song to sing."

Much like Frank Sinatra and Tony Bennett, popular artists who were inextricably linked to jazz while not belonging wholly to the scene, Anthony has honed an approach based upon jazz's rhythmic fluidity but that doesn't depart from the essential melodies. He's not a scat singer who uses songs as launching pads for extended improvisation. Rather, he improvises around the edges, extending a syllable to emphasize a phrase, or pausing to underline a feeling.

CD annotator Francis Davis singles out Bryan's ballad interpretation of "Then Can't Take That Away" as a performance "where his simpatico with Norian is worthy of comparison to Tony Bennett's duets with Bill Evans."

Bryan Anthony, 33, was born in Santa Rosa, California, and raised in Houston. In high school he got involved in musical theater, but experienced an epiphany when a friend gave him a copy of Sinatra's greatest hits from his Reprise years. While seeking out more Sinatra recordings, he got turned on to the jazz vocal pantheon, from Joe Williams, Tony Bennett, and Chet Baker to Ella Fitzgerald, Sarah Vaughan, and Carmen McRae. In 1995 he enrolled at Manhattan School of Music to study classical voice, then went on to earn a master's at NYU in jazz and studio music.

In 1997 he took a leave of absence from school to go out on the road with the Glenn Miller Orchestra. "It was incredible to perform five nights a week," Anthony says. "The bandleader Larry O'Brien was very much of the old school of big band singing. I learned a lot having him give me notes every night, really instilling that crooner tradition."

Anthony later toured with the Tommy Dorsey and Nelson Riddle Orchestras. He also released his first album in 2000, "Look at Me Now," which he expanded and re-released in 2006 as "Songs for Dreamers."

"The biggest compliment I get is when people tell me 'I've heard that song a million times, but that's the first time I heard it in that light,'" says Anthony. "I tried to learn the ropes out on the road with the Miller and Dorsey bands. I wanted to learn the tradition of American pop singing, and then find my own voice. At first I was drawn to Sinatra. I'm a baritone and I've got a similar timbre. But now I try to sound as far away as I can."

Bryan Anthony, who divides his time between New York and Houston, recently appeared with fellow Mercator Media artist Yvonne Washington and the Gary Norian Trio at Cezanne's in Houston. To see other dates in the works, please check: www.bryananthonymusic.com
Posted by Arnaldo DeSouteiro at 10:42 AM