Compilation of the Month - "Harry Belafonte: Sing Your Song" 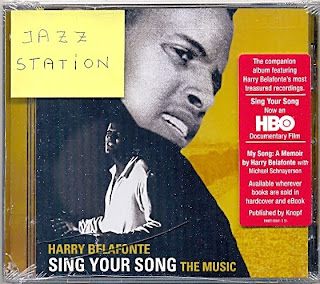 "Sing Your Song - The Music" includes some of Belafonte's most treasured recordings and is the companion to his long awaited autobiography "My Song: A Memoir by Harry Belafonte" (co-written with Michael Schnayerson and published by Knopf in both hardcover & eBook) and to the critically acclaimed HBO documentary movie "Sing Your Song."

These 16 specially selected songs serve as a chronological musical narration of the film and the book, as they follow the extraordinary milestones of Belafonte's incomparable career.

My two personal favorite tracks are from the underrated 1977 album "Turn The World Around," recorded in the USA but only released overseas and never reissued on CD anywhere in the world: its sensational title track and "Can't Cross Over." Nothing less than five expatriate Brazilian musicians took part on the sessions: trumpeter Claudio Roditi, keyboardist Dom Salvador, and percussionists Dom Um Romão, Naná Vasconcellos (credited only as Nana) and Portinho (credited as Thelmo M. Porto). They add a fiery spice to the title track "Turn The World Around," using cuica, berimbau and other typical Brazilian instruments. Mauricio Smith, who recorded on Dom Um's legendary sessions for Muse, is heard on flute; Francisco Centeno plays electric bass; Dom Um's protegé Steve Thornton (who recorded with his master on the "Hotmosphere" album for Pablo) plays bongos; and Keith Loving is the electric guitarist.

Other highlights: "Mark Twain" (featuring Millard Thomas on acoustic guitar), "Sylvie" (with the Norman Luboff Choir), "Banana Boat Song" (orchestra & choir conducted by Tony Scott, a tune from Belafonte's groundbreaking 1956 "Calypso" album), the epic title song from the 20th Century Fox film "Island in the Sun" (Harry was the movie's star), "Man Smart, Woman Smarter" (with Mundell Lowe on guitar, a song covered by The Grateful Dead, The Carpenters and Robert Palmer), "A Hole in the Bucket" (an improvised comic duet with folksinger Odetta done for the 1959 TV special "Tonight with Belafonte" that won an Emmy, making Belafonte the first African-American to receive the prestigious Award), "Jamaica Farewell" (by Harry's most frequent collaborator, Irving Burgie, artistically known as Lord Burgess, this song was later covered by Bob James on his "Three" album for CTI), "My Angel" (aka "Malaika," featuring Miriam Makeba) and "Matilda," another big hit.
**********
Film Synopsis
"Sing Your Song" is the result of a confluence of many events, things as diverse as the passing of Marlon Brando, a look back at the lives of many other unsung heroes in the fight for justice as well as the faithful love (and gentle nagging) of two daughters. Like Brando, there are many public figures who are not known, primarily, for their activism, their compassion and their dedication to human rights. Harry Belafonte is one of them:

“Cecilia, the daughter of another silent warrior, my friend Gregory Peck, had just completed a documentary on her father’s remarkable life. Coincidental to this, was the tugging by my daughter, Gina, to document my own journey. For many years I had resisted prodding by several who felt that I should both write and film my story. The idea as an end in itself seemed too self-serving. But I was awakened to the possibilities of making such a commitment by revealing the stories that could be told of and by all those with whom I shared an unending quest for justice.”

"Sing Your Song" is an up close look at a great American, Harry Belafonte. A patriot to the last and a champion for worldwide human rights, Belafonte is one of the truly heroic cultural and political figures of the past 60 years. Told from Harry’s point of view, the film charts his life from a boy born in New York and raised in Jamaica, who returns to Harlem in his early teens where he discovers the American Negro Theater and the magic of performing.

From there the film follows Belafonte’s rise from the jazz and folk clubs of Greenwich Village and Harlem to his emergence as a star. However, even as a superstar, the life of a black man in 1960s America was far from easy and Belafonte was confronted with the same Jim Crow laws and prejudices that every other black man, woman and child in America was facing.

Among other things, the film presents a brief look at the Civil Rights Movement through the eyes of an insider, someone who despite his high profile, wasn’t afraid to spend time in the trenches.

From Harlem to Mississippi to Africa and South Central Los Angeles, Sing Your Song takes us on a journey through Harry Belafonte’s life, work and most of all, his conscience, as it inspires us all to action!

Video Blog: Truth or Dare
As part of his continuing social and political activism, Harry Belafonte is launching Truth or Dare. Comprised of a bi-weekly video blog (Truth) and a direct call to action (Dare), Truth or Dare aims to use social media and Harry's own stories to inspire people to take action in their communities.
http://singyoursongthemovie.com/truth-or-dare/

For more infos about the movie, please visit: www.singyoursongthemovie.com
Posted by Arnaldo DeSouteiro at 10:46 AM