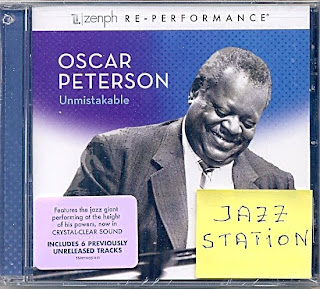 Sony Masterworks Jazz and Zenph Sound Innovations announce the fourth release in their ongoing collaboration: Oscar Peterson's "Unmistakable," a collection of re-performances® created from unreleased recordings Peterson made during the Seventies and Eighties. The re-performances® capture the renowned jazz pianist playing at the height of his powers, in crystal-clear sound, with six tracks never-before-heard by the public. Available October 4th here in the USA, "Unmistakable" extends the acclaimed technological breakthrough featured in prior Sony/Zenph releases of Glenn Gould, Sergei Rachmaninoff and Art Tatum.

The final result is so superb & fascinating that the process deserves a brief explanation. Zenph Studios take audio recordings and turns them back into live performances, precisely replicating what was originally recorded. The Zenph software-based process extracts every musical nuance of a recorded performance and stores the data in a high-resolution digital file. These so-called "re-performance files" contain every detail of how each and every note was played, including pedal actions, volume and articulations - all with micro-second timings.

The re-performance files are played back on a real acoustic piano fitted with sophisticated computers and hardware, letting the listener "sit in the room" as if we were there when the original recording was made. The re-performance is then recorded afresh, using the latest microphones and recording techniques, to modernize monophonic or poor-quality recordings (which is not the case of these Peterson's tracks) of great performances.

“We collaborated closely with the Peterson family and a superstar team of professionals to create this album,” noted Dr. John Q. Walker, Chief Technology Officer and co-founder at Zenph. “What we’ve achieved is nothing short of miraculous: one of the world's greatest jazz pianists, playing one of the world's finest instruments, recorded in the most famous recording studio on Earth, Abbey Road. This is a high-water mark for our technology, and we are awestruck by the results.” Alex Miller, Senior Vice President of Sony Masterworks adds, “The results of the latest Sony/Zenph collaboration are truly breathtaking. We are incredibly proud to add to Oscar Peterson’s recorded legacy this level of technological and musical virtuosity.”

Zenph’s production team was led by composer, pianist and music researcher Dr. Anatoly Larkin, Director of Performance Analysis for Zenph. The process began with Peterson himself. In March 2007, after having heard about Zenph’s technology, Peterson invited Dr. Larkin and Dr. Walker to his home outside Toronto. The Zenph team set up a Yamaha® Disklavier Pro piano and Zenph computers in his living room to play him examples of their work. First, they played re-performances of his mentor and idol, Art Tatum.

Hearing his hero playing live again after all the ensuing years, brought Peterson to tears. The Zenph team spent the rest of the afternoon listening and reminiscing, including playing Peterson performances for Peterson, and taking copious notes. As a lifelong technology buff, Peterson understood and was enthusiastic about the implications of the Zenph technology on his legacy. The pianist passed away later in 2007.

Zenph employs a proprietary process that uses computer software to transform recorded music back into live performances, precisely replicating what was originally played but with vastly-improved sound quality. To create the Peterson re-performances, the Zenph team began with video recordings and several unreleased, private recordings of exceptional performances.

Recorded in Studio Two at Abbey Road Studios in London, the Zenph team used a specially-outfitted Bösendorfer Imperial concert grand piano (Peterson was a Bösendorfer artist) to authentically recreate the distinct sounds of Peterson’s artistry. Zenph and Sony assembled world-renowned talent including GRAMMY®-winning producer David Lai, GRAMMY®-winning recording engineer Arne Akselberg, famed piano voicer Marc Wienert, and British electronics wizard Richard Shepherd. The album was recorded in stereo, binaural and surround-sound. In addition to the CD, the tracks will also be released on HDtracks (at “better than CD” resolution) and iTrax (in high-definition surround sound). A must-have items for Peterson fans and audiophiles in general.

Zenph's website (www.zenph.com) offers more comprehensive info about the company and its re-performance process, including additional audio samples of original performances from decades ago along with the corresponding re-performances.

Tracklisting:
from 1 to 8 - Stereo Version
1. Body and Soul
2. Back Home Again in Indiana
3. The Man I Love
4. Who Can I Turn To?
5. When I Fall in Love
6. Duke Ellington Medley (Take the A Train, In a Sentimental Mood, C Jam Blues, Lady in the Lavender Mist, All of a Sudden My Heart Sings, Satin Doll, Caravan)
7. Con Alma
8. Goodbye
from 9 to 16 - Binaural Stereo Version (The Ultimate Headphone Experience - unbelievable!!!)
**************
Sony Masterworks USA comprises the Masterworks Broadway, Masterworks, Masterworks Jazz, RCA Red Seal and Sony Classical imprints.

Zenph® Sound Innovations is a music technology company based in Durham, North Carolina. The company’s work was named one of the “Best Ideas of the Year” by The New York Times Magazine and has received multiple GRAMMY® nominations. The astonishing fidelity and nuance of recordings produced by Zenph software has earned the company accolades from music lovers and critics the world over, including astonishing, back-to-back, perfect-10 reviews from The Absolute Sound and a “Record To Die For” distinction from Stereophile. Recent Zenph albums with Sony Masterworks include Glenn Gould playing Bach’s “Goldberg Variations,” "Rachmaninoff Plays Rachmaninoff," Art Tatum's "Piano Starts Here, Live At The Shrine" and "Joshua Bell: At Home with Friends." 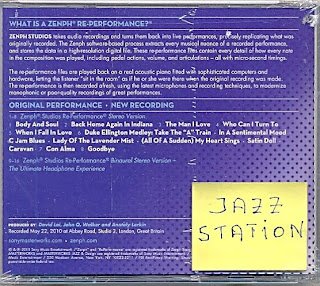