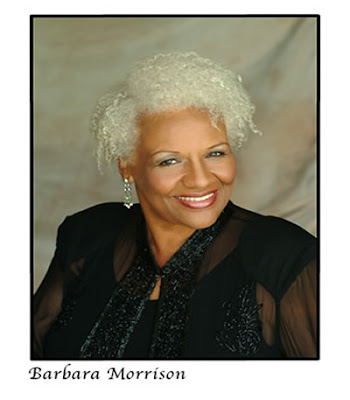 Critically acclaimed vocalist Barbara Morrison returns to Steamers this Friday & Saturday, October 14-15, to celebrate the 17th Anniversary of Steamers! The dazzling Barbara Morrison has been featured on over 20 recordings in almost every genre from traditional jazz and blues to gospel and pop. Her melodic voice, with its two-and-a-half-octave range, is known worldwide, as are her rich, unique, soulful and highly spirited interpretations of both, familiar jazz and blues classics, and original contemporary tunes. Most striking is her ability to belt out down-home, soul-stirring blues. Breathtaking are her impassioned renditions of old and favorite torch songs.

It come as no surprise that listeners have experienced the pleasures of Morrison's rich and vibrant tones as the lead vocalist on the movie sound track for The Hurricane, starring Denzel Washington, as well as her vocals on The Duke Ellington Millennium CD, and Johnny Otis's most recent CD, "Ooo Shoo Be Dooo." Additional credits include the hit NBC TV comedy The Naked Truth, The Tonight Show with Jay Leno and The Dennis Miller Show.

Born and raised in and around Ypsilanti, Michigan, Barbara Morrison recorded her first appearance for radio in Detroit at the age of 10. Well known in the Los Angeles area for her duo and trio dates, Morrison also tours extensively across the continental United States, Western Europe, the Far East and "Down Under", wowing audiences with her own band, and opening for such greats as Ray Charles. She appeared a a guest star with the Count Basie Orchestra, the Clayton-Hamilton Jazz Orchestra and Doc Severinsen's Big Band. In additional to her gigs with such luminaries, she also performs at festivals around the world including Montreux, Nice, Pori, Carnegie Hall, North Sea, Monterey, and Long Beach. Her Salute to Dizzy Gillespie and her Tribute to Benny Golson, are fondly remembered by Morrison fans that return again and again to share her rare, unique and exceptional vocal gifts.
Posted by Arnaldo DeSouteiro at 3:36 PM