Obama: "I will not take no for an answer"

According to our records, you are currently registered and living in California's 30th Congressional District.

Last night, the American Jobs Act was filibustered by Senate Republicans. There was no vote on the actual bill.

But it would have succeeded: the American Jobs Act has at least 51 votes -- a clear majority -- to pass the Senate. And a new poll shows that 63 percent of Americans support it, too.

Today the President recorded a message he wants you to see, laying out where we go from here in the fight for jobs.

Watch President Obama's video -- and pass it on to anyone you think should see it. 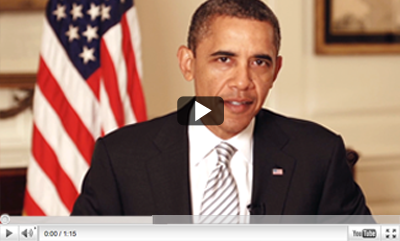 Watch the video -- and make sure your friends do, too:
http://my.barackobama.com/President-on-Jobs

The Republicans who voted yesterday to block this bill weren't thinking about middle-class families. In fact, at last night's GOP debate, one of their leading candidates actually refused to say he'd extend a payroll tax cut that puts more than $1,000 in the pockets of everyday working Americans.

They might believe it's in their political interest to oppose whatever the President proposes for the next 13 months, but we know that when it comes to jobs and restoring economic security, Americans can't afford to wait.

The American Jobs Act would get to work now, providing incentives for businesses to hire unemployed veterans, helping hire tens of thousands of teachers, cops, and firefighters, and rebuilding and modernizing our schools, railways, bridges, and airports. Even though it's fully paid for and made up of proposals both parties have supported, Republicans yesterday said no.

Now the President wants you to hear directly from him about what's next.