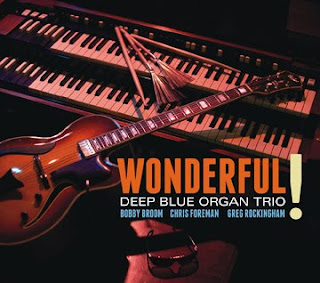 "Stevie was a huge influence," states Broom, who produced and arranged "Wonderful!," the trio's fourth CD and second for Origin. "He was monumental in terms of what he gave to us in that generation." In selecting material, the group aspired to do justice to their own sound and approach as well as Wonder's music. "We wanted to be creative without going overboard or changing things just for the sake of changing them," says Broom. "We wanted to get to the essence of the songs."

Deep Blue's choices include "You've Got It Bad Girl" from 1972's "Talking Book" album; "Golden Lady" and "Jesus Children of America" from 1973's classic "Innervisions"; and "You Haven't Done Nothin'" and "Ain't No Use" from 1974's "Fulfillingness' First Finale." On its turn, "As" appeared on the 1976 album "Songs in the Key of Life," while "Tell Me Something Good" was debuted by Rufus featuring Chaka Khan on that group's 1974 MCA album, "Rags to Rufus," being later recorded by Phil Upchurch & Tennyson Stephens on their one and only album as co-leaders for Kudu, "Upchurch/Tennyson." [CTI/Kudu's big boss Creed Taylor also loved Stevie Wonder and selected many of his songs to albums by Joe Farrell, Johnny Hammond, George Benson and Hank Crawford, among others]

Rockingham adds that the musicians listened closely to the originals, and searched for different ways to play them. "And we made sure that we knew the words so we could play the melodies true to what Stevie was saying," he says. Embracing that point of view, Deep Blue retains many of the nuances of Wonder's own interpretations. On "You Haven't Done Nothin'," for instance, the trio uses a repeating three-note riff, sung on the original by the Jackson 5. Other tunes have been ingeniously reworked, with "Golden Lady" turned into a waltz and "My Cherie Amour" a ballad.

Broom, Foreman, and Rockingham -- who first played together in 1992, and formed Deep Blue in 2000 -- have emerged as prominent purveyors of the jazz organ trio tradition. Prior to "Wonderful!," the band recorded two albums for Delmark (2004's "Deep Blue Bruise" and 2006's "Goin' to Town: Live at the Green Mill"), and 2007's "Folk Music" for Origin. For the past nine years, when not on tour, they've held down Tuesday nights at the famed Chicago jazz club, the Green Mill.

Award-winning music biographer David Ritz, who wrote the liner notes for "Wonderful!," heard a Deep Blue performance at the Green Mill and enthused, "These guys are playing ballads that have me weeping, blues that have me moaning, grooves that have me jumping."

Harlem native Bobby Broom has played with such notables as tenor sax titan Sonny Rollins (early- to mid-1980s, and again from 2005 to 2010), organ maestro Charles Earland, and the exceptional pianist-composer Dr. John. He has 10 albums under his name, most recently "Bobby Broom Plays for Monk" (Origin, 2009). Greg Rockingham, from Waukegan, Illinois, has been on bandstands since he was a pre-teen, including a decade spent working with Earland. Chris Foreman, born blind in Chicago, has played with such marquee artists as bluesman Albert Collins and the Mighty Blues Kings.

"We listen to each other," says Foreman of the trio's chemistry. "Some things we don't even talk about. If you don't talk about it so much and just let the music happen, then it happens."

Performance opportunities outside of Chicago have been coming the trio's way in recent years. Since 2008, Deep Blue has opened numerous concert dates for pop icon Steely Dan in the U.S. and Canada. A long-overdue New York City debut for the trio happened on August 8 @ Dizzy's Club Coca-Cola, and a European tour is now being booked for the fall.

"The Deep Blue Organ Trio has been working hard for a really long time," says Broom. "We do it because it's what we feel for and believe in. It's exciting to think about being able to continue with more success and reaching wider audiences."