Instrumental CD of the Month - "Marc Copland & John Abercrombie: Speak to Me" 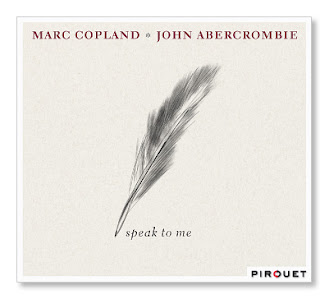 Instrumental CD of the Month
Marc Copland & John Abercrombie: "Speak to Me" (Pirouet) 2011

Lyricism abounds. Subtleness reigns. The best piano/guitar album since the legendary Bill Evans/Jim Hall sessions from the '60s. No "extra" notes; only the essence matters for Copland & Abercrombie. They know how to play the silence. "Speak to Me," by far one of the best releases of 2011, is the CD premiere of a duo that has actually been in existence for some time.

Both musicians provide strong originals (Copland's "Left Behind" and Abercrombie's "So Long" are among the highlights), but my personal favorite tracks are the renditions of "Witchcraft," "If I Should Lose You" (on both songs, after their individual solos, they perform fantastic dialogues) and "Blues Connotation."

These takes by pianist Marc Copland and guitarist John Abercrombie are inspiring examples of the quiet, calm art of communication practiced at the highest level by two individuals with solid musical personalities. It is comparable to the finest chamber music - call it "chamber jazz" if you will. This is music from two of the most insightful players of jazz.

Producer-engineer Jason Seizer captured this magic feeling in the most natural way, achieving a warm sound with a beautiful ambiance. However, there's a small ammount of hiss - noticeable in the left channel - in the beginning of tracks 7 ("Falling Again") and 9 ("Witchcraft"). Anyway, I repeat: it's one of the best albums of the year.
**********
Copland's catalog on Pirouet doesn't stops to grow. "Alone" reveals Marc Copland solo, a facet that is especially exciting. When reviewing that album here on this blog, Arnaldo DeSouteiro wrote: "Marc Copland is one of the best pianists in jazz history, an underrated artist who's in the same creative level of Keith Jarrett and Ahmad Jamal, all with particular and peculiar musical styles. "Alone", Marc's solo adventure, comes out on the Munich-based Pirouet label after this pianist's extraordinary "New York Trio Recordings" series of three CDs."

Over and over it has been emphasised how sensitively Copland reacted to his trio partners (each of the trio CDs, by the way, were made up of different group members) - what a kaleidoscope of colours his playing can absorb and reflect. Despite (or is it because of) Copland's unique tonal language, the individual nuances of each playing partner are revealed. Born in Philadelphia in 1948, he began his professional career in the nineteen sixties as a saxophonist. Since the late eighties he has more and more made a name as a pianist with a totally unique aesthetic. His enigmatically suspended harmonies create textural nuances which have become an unmistakeable trademark of Copland's.

John Abercrombie had studied at the Berklee School of Music in Boston during the 1960's and had already become one of the most in-demand session musicians in New York. It was during this time that Copland and Abercrombie played together in drummer Chico Hamilton's band - and established a connection that continues to this day. With Copland having crossed over to piano, both have been playing together with different groups on a wide variety of CDs since 1988. In addition, the two musicians often played duo concerts one of which was celebrated by the Washington Post newspaper as "elegant and earthy at the same time". Now, at last, one can experience this great duo on "Speak to Me."
Posted by Arnaldo DeSouteiro at 10:42 AM