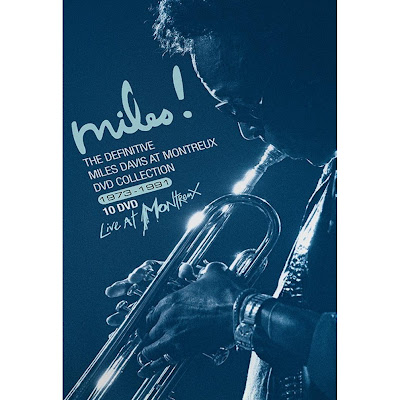 Fans have been eagerly waiting for it: the complete collection of Miles Davis' concerts at Montreux is finally available today in the USA, released by Eagle Vision. "These live recordings, spanning nearly 30 years, not only show Miles' creativity but also the major influence he had and still has on today's music. I am very proud that by keeping all these recordings through the years and using only direct mixes, the magic of Montreux can be yours now," says Claude Nobs, director and founder of the Montreux Jazz Festival.

A DVD of "highlights" had already been released in July, but this historic 10-DVD, titled "Miles! The Definitive Miles Davis at Montreux" captures all of Miles Davis' performances at the renowned Montreux Jazz Festival between 1973 and 1991, the last being less than three months before his death. It is an unparalleled archive of live Miles Davis performances and is now being released on a visual format for the first time ever.

Mastered in DTS Surround and Dolby Digital 5.1 sound, this limited issue box will only be manufactured to the tune of 5,000 units. This release – an unparalleled archive of live Miles – comes complete with a 48 page booklet featuring a foreword by Montreux Jazz Festival founder Claude Nobs, about this most enigmatic, prolific, and important jazz figure of the 20th century.

Although many tunes are repeated across the years, the concerts are strikingly individual with extensive improvisation and frequent rearrangements.

It would be 11 years before Miles would grace the Montreux stage again. In 1984, with a seven-piece band (featuring Bob Berg on sax and keyboards, Darryl Jones, now in the Rolling Stones, on bass, John Scofield on guitar and Al Foster on drums), Miles performs 11 pieces stretching out over an hour and a half. The following year, the same lineup would perform the same set but you'd never know it by the way Miles changes up the changes in each song so it never comes out the same way twice.

In 1988, Miles returns for a very special night with saxophonist Kenny Garrett (who can also be heard on the 1990 set) to explore his "In A Silent Way" for the first time in years. The two-hour, 16-piece set is a spellbinder.

In 1989, Chaka Khan adds vocals to "Human Nature" in a fabulous 13-piece 113-minute set (I was there!) that features Rick Margitza on sax (as far as I know, Rick's only performance with Miles ever taped), Kei Akagi and Adam Holzman on keyboards, Foley on lead bass, Benny Rietveld on bass, Ricky Wellman on drums and Munyungo Jackson on percussion.

The final concert, on July 8, 1991, a little under three months before Miles' death, is a haunting 60-minute set previously available on CD and LaserDisc (the total time of the original LaserDisc was 74 minutes, since it included rehearsal takes too), featuring Quincy Jones conducting the Gil Evans Orchestra and George Gruntz Concert Jazz Band. On this night, Miles allows himself one small semblance of sentimentality, performing tracks from his legendary collaborations with Gil on the albums "Miles Ahead," "Porgy and Bess" and "Sketches of Spain."

With Miles' philosophy of "never look back" it was extraordinary that he would agree to perform such a show and it was a truly unique occasion captured here for posterity. Miles Davis is undeniably one of the most important and successful jazz figures of the 20th century. This unrivalled DVD box set of his live performances at Montreux is a release to be truly cherished, by far the most important video release of this year. 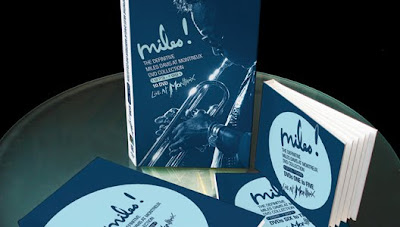