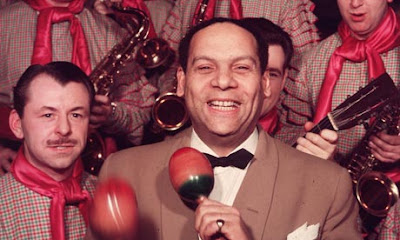 (Edmundo Ros with his band around 1965. Photo: Keystone/Getty Images)

The seductively orchestrated Latin-pop songs that set British feet tapping in the 1940s and 50s made the Trinidad-born bandleader Edmundo Ros a household name. But beside such musical success, Ros, who has died aged 100, made a remarkable reinvention of his life: the mixed-race "outsider" successfully challenged the British class system, to become, as he put it, "a respected gentleman".

When he went to London in June 1937 to study at the Royal Academy of Music, he felt racially categorised by being sent to lodgings for colonial students. A tall, strikingly handsome man, he was determined to crash through such restrictions. Within five years, he had deployed his talents, charisma and charm to good enough effect to find himself performing for the future Queen of England – and was himself developing a cut-glass accent.

Ros began this transformation as soon as he arrived in the capital. On his first night there, he went to the Nest club in Soho to join pianist Don Marino Barreto as a drummer in Cuban songs. The next day, he was hired to play drums and sing on the Mayfair circuit of fashion salons and supper clubs, and in 1938 recorded with both Barreto and Fats Waller.

During the second world war, Ros briefly drove ambulances before launching his own 16-piece dance orchestra to play at the Coconut Grove Club at 177 Regent Street. He alternated between that and the Bagatelle Club off Picadilly, where members included Winston Churchill and Charles de Gaulle, and the heads of Europe's allied forces. Most significant to Ros, Princess Elizabeth danced there with her friend Captain Wills.

Ros's popularity escalated in postwar Britain through live radio concerts, produced by Cecil Madden. In 1948, he supported Carmen Miranda for a year at the London Palladium, while still playing the Coconut Grove, and the following year The Wedding Samba sold 3m copies in Britain and entered the US charts.

Its success coincided with a highly publicised high court adultery case involving him and a Dutch army officer, both known to an upper-class English couple. Instead of protesting his innocence, Ros remained silent during the trial, but was still fined £1000 for having befriended the lady in question, whereas the truly guilty party was fined £300. Ros understood the racial implications but saw it as his big break, since in discussing the case, Queen Elizabeth, the later Queen Mother, apparently described him as "a gentleman". In 1950, her husband, King George VI, invited him to perform at Windsor, and he took his fiancee, the beautiful Swedish aristocrat Britt Johansen, whom he married that year.

Ros was famously cagey about the royals, but he did once reveal to me, in a stage whisper, that he later lent his office at the Coconut Grove to Princess Margaret and Captain Peter Townsend "for private drinks". By then, his clothes were from Jermyn Street and he performed only to the upper classes. But his hit records – including Melodie d'Amour, Tico Tico, Her Bathing Suit Never Got Wet and The Cuban Love Song – and radio shows, still produced Madden, broke all social boundaries.

Latin music was by then a significant part of postwar Britain's dance scene, but fellow bandleader Victor Silvester suggested to Ros that he needed to adapt his music to get people dancing to it. By hooking a Latinised military beat to a familiar song, he produced an experimental version of Colonel Bogie in the style of the dance known as the merengue and proved the point: "It fitted beautifully," Ros recalled. That became "The Ros Sound" - flattened rhythms, catchy melodies and sophisticated arrangements, all fronted by his risque word-plays and tongue-twisting rhymes, carried on a soft Caribbean lilt.

In 1951, Ros bought the Coconut Grove's expiring lease and reopened as Edmundo Ros's Supper and Dance Club. It became the playground for an exclusive international membership of kings and admirals, Hollywood stars and British aristocrats. Its door policy was legendary, with both Peter O'Toole and King Hussein of Jordan refused admission for over-casual dress. Ros's holding company incorporated a talent agency, dance school and photo-lab for printing guests' portraits. On the radio, his hit records were a constant presence on programmes like Housewives' Choice and Two-way Family Favourites.

In 1953, Decca hired a young Belgian producer, Marcel Stellman, to work with the UK's leading Latin band leaders, Ros and Stanley Black. Stellman said, "The key to [Ros's] popularity was his engaging rhythm section. Within 12 bars of his music, people knew who it was, and they loved his rhythmic voice." He was not interested in an "authentic" Latin sound, though their first album, Rhythms of the South (1958) sold a million copies. Instead, he introduced pot-boilers like I'm Just Wild About Harry, set to mambos and sambas, and went on to strike gold in the 1960s with Ros at the Opera, Hair Goes Latin and even Japanese military tunes set to Latin beats.

Ros's popularity now extended internationally, and included a television collaboration in New York with his American counterpart Xavier Cugat, in the series Broadway Goes Latin. On British TV, Ros performed on faux-Spanish sets for The Billy Cotton Band Show, Saturday Night at the London Palladium and the Royal Variety Shows, and in 1965 was hired by Madden for A Night of 1000 Stars, the opening party for the BBC TV Centre, where he backed Vera Lynn and the Beverley Sisters. Bill Cotton Jr, later director of BBC Light Entertainment, described Ros's band as "very sophisticated; he was Latin American music".

A native of Port of Spain, Edmund William Ross had a complex family background. His mother, Luisa Urquart, was a teacher, apparently descended from indigenous Caribs, and his father, William Hope-Ross, the illegitimate son of a Scottish-Canadian plantation owner, brought to Trinidad by an employee called Hope-Ross. A ship's electrician, William took Luisa, and then their first two children, Edmund and Ruby, on boats around the Caribbean until they reached school age. At Tranquillity school, Port of Spain, their teachers instilled in them Victorian, Christian values brought from Britain.

Edmundo's father left the family and he became "a bit of a delinquent", ending up in the local police boot camp. In turned out to be a stroke of luck, since it introduced him to music through playing the euphonium and percussion. When his mother became involved with a man he loathed and had a son by him, the 17-year old left for Caracas, Venezuela to study at the Academy of Music under Maestro Vicente Emilio Sojo.

He played drums in the city's nightclubs, and was soon hired by Sojo as timpanist in the new Venezuela Symphony Orchestra. His local name, "Edmundo Ros", launched a lasting myth that he was Venezuelan. Impressed by Sojo, Ros applied to the RAM in London to study conducting and composition.

By the 1960s, Ros had become hugely wealthy, and lived with Britt and their children, Douglas and Luisa, in a modernist house in Mill Hill, north London. His car collection included a Rolls-Royce with the registration EWR1. With their children at boarding schools, Britt continued as his companion at his club.

However, as the decade went on, pop began to gnaw at Latin music. When his club lease expired, he closed down and turned to lucrative international tours. Then, in 1965, "Britt danced out of my life," leaving him for a Colombian friend of theirs whom she had met at the club. He sold the family home and bought a luxury apartment in St John's Wood, next to Victor Silvester. Silvester's grand-daughter Tara recalls "Uncle Edmundo" as "very good fun, very stern, very posh; he would do anything to stop you thinking he was black".

In 1971, Ros married Susan, three decades his junior, after they had met on a train. Four years later, he abruptly "closed the shop" following what he saw as mutinous behaviour by some recently unionised musicians during a tour of Japan. He sent his orchestra's sheet music archive to be shredded at the Bank of England, and during a formal dinner for the musicians and their wives announced, "It's all over."

Predictably, Ros's musical career did not end there. His last concert, in 1994, was a two-headed Latin extravaganza with Stanley Black, at the Queen Elizabeth Hall in London, followed by a This Is Your Life programme on television. In 2000, the composer Michael Nyman produced a BBC TV documentary about him entitled I Sold My Cadillac to Diana Dors, and described him as: "One of the few black men to have attained national recognition; he hadn't gone for 'the gorblimeys', he wanted to be a gentleman, the greatest satisfaction you can earn in England."

Ros was appointed OBE in 2000, and his 1940s hit Va Va Voom reappeared in a cinema advertisement for a Triumph bra – a wry tribute to the man who, said Nyman, "single-handedly introduced Latin American music to English audiences". He is survived by Susan and his children.
Posted by Arnaldo DeSouteiro at 10:50 AM