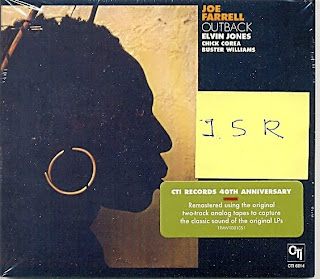 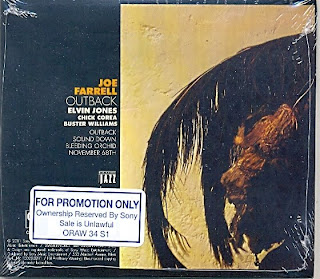 At the time of its original LP release, "Outback" received in 1972 the "Best Engineering Award" from Japan's "late" jazz bible, Swing Journal. 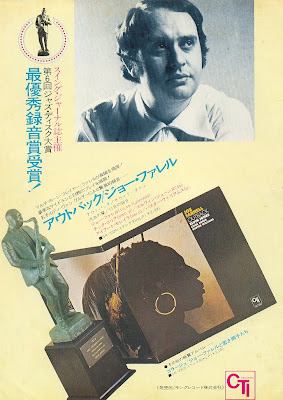 Is this version worth replacing the 2006 Japanese issue? I am uncertain what the 4-star rating for remastering is based on.

Hi Tim,
Firstly, thx for reading.
Secondly, thx for asking.
No, you don't need to get this new reissue if you own ANY of the Japanese editions.
I've decided to feature the Sony CD because it's the first domestic CD issue of "Outback" in the USA. Besides the fact that I really love this album and I adore Joe Farrell, who remains a unsung hero of the CTI/fusion era.
BUT, if you are a CTI addict I would recommend u to get a copy of this Sony CD as a second source of musical pleasure ('cause the mastering differs a lot from the Japanese remasters), but never as a replacement.
I own copies of several Japanese CD issues of "Outback" released by King Records and the two best ones are: KICJ 8048 (released on August 5, 1994, remastered by Akira Andoh, available in standard jewel case but with the CD booklet reproducing the complete artwork of the original LP) and, my favorite, KICJ 9012, released on December 21, 1995, in mini-LP gatefold sleeve with a goregous 24-bit remastering by engineer Seiji Kaneko, who employed the Studer A800VUMK II equipment, the HSR-2000P and the dCS900 AD converter.
The only "problem" regarding the KICJ 9012 is that the liner cover reproduces the front cover (in black & white!) instead of using the original liner artwork with the musicians pics, credits etc...A shame!
The only Japanese issue I don't recommend at all (except as a rarity for obsessive CTI collectors) is the first one, from 1987, since we still were in the "beginning" of the CD era, using the first analog-to-digital converters, and the technology hadn't been perfected yet. In the '90s, everything improved regarding equipment for digital transfers, mastering etc.
I gave a 4-star rating for the Sony remastering because, although Mark Wilder used the original 2-track analog tape mixed by Rudy Van Gelder, that tape had been a little "deteriorated" after so much time with no use in storage at Sony (CBS) vaults. So, sometimes you can notice a tape hiss (specially in the left channel during the drums solo on the last track, since Van Gelder's mixing standard for drumsets at the time was to isolate the bass drum on the left channel, while keeping all other parts - snare, hi-hat etc - in the right channel*) and a small distortion in the frequencies of the tenor sax and the flute.
*that proceeding was ok for other drummers, like Billy Cobham, as we can hear on another great album reissued in this same CTI/Sony series, Randy Weston's "Blue Moses." But Elvin Jones, on his only CTI date ever, btw, took his own drumset to the studio and used a different tunning, so maybe Rudy didn't have time to do enough mic experiments before starting to record, specially because the whole album was cut in a single day; after all basic tracks were recorded "live in the studio," only Airto overdubbed some percussion instruments (like the castanets on "Bleeding Orchid") and Farrell himself overdubbed another flute and a piccolo on the title track. Chick didn't overdub anything after having performed only a Fender Rhodes throughout the album.
King Records also uses an original tape provided by RVG back in 1972, but I have been there at King Studios many times and I can guarantee they keep their analog tapes in much better "rooms," in much better conditions, under the supervision of King's "chief technical engineer" Kuniaki Takahashi, who happens to be a big Van Gelder fan.
If I were supervising this Sony series I would have added alternate takes as bonus tracks, and maybe even a fantastic live version of "Sound Down" performed by Farrell during a CTI All-Stars concert in Munich, on August 20, 1972.
Cheers!