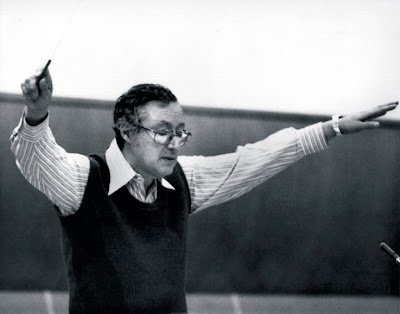 Pete Rugolo, a leading figure in the synthesis of jazz and classical music and an award-winning composer and arranger with a recording career of his own, died in Sherman Oaks, California on Sunday evening, October 16th, of age-related causes. He was 95. He was known mainly as the arranger responsible for shaping the "progressive jazz" sound of the Stan Kenton Orchestra.

Composer/conductor John Williams issued the following statement:“Pete Rugolo’s passing is a notable event as he was a true and powerful original whose music made an invaluable contribution to a very rich period in American music.”

Over his long career, Rugolo collaborated with the most accomplished American jazz and pop artists, arranging for Peggy Lee, Charlie Parker, Benny Goodman, Louis Armstrong, Nat King Cole, June Christy, The Four Freshmen, Patti Page and Mel Torme, among others. During his years as musical director of Capitol Records, he produced Harry Belafonte’s first singles; he also released and titled the legendary Miles Davis “Birth of the Cool” album, which compiled all the sessions previously recorded and released only as 78rpm singles.

(Those groundbreaking sessions recorded by Miles' nonet for Capitol in 1949 and 1950 -- with revolutionary arrangements by Gerry Mulligan, John Lewis, Gil Evans, Johnny Carisi, and featuring such musicians as Lee Konitz, Kai Winding, J.J. Johnson, Max Roach, Kenny Clarke & John Barber -- were supervised by Walter Rivers, a relative of composer (and Capitol co-founder) Johnny Mercer, who was briefly employed by the label in the late 40s and early 50s. Some years after those tracks had been released as singles, eight of them were reunited in 1954 onto a 10-inch LP as part of Capitol's "Classics in Jazz" series. Then, in February 1957, all the eleven instrumental performances finally came out on a 12-inch vinyl album, for the first time under the title "Birth of the Cool," coined by Pete Rugolo.)

Rugolo was also responsible for having introduced the great Brazilian guitarist (and my dear friend) Laurindo Almeida to Stan Kenton, who immediately hired Laurindo for his orchestra. Arnaldo DeSouteiro and Pete Rugolo met in 1999, when both were interviewed in Los Angeles for Leonardo Dourado's documentary "Laurindo Almeida, Muito Prazer" ("Laurindo Almeida, Pleased To Meet You"), brodcasted in the Brazilian TV channel GNT. Like Rugolo himself remembered, he met Laurindo in 1947, when the guitarist asked for an appointment at Capitol Records. "Laurindo played for me for half-an-hour and I was astonished and fascinated," he said. "Then I gave a phone call to Stan Kenton, who lived near Capitol Records, and told him to come to my office, 'cause I was listening to best guitarist I had ever heard. Kenton drop by and offered Laurindo Almeida a job in his band."

A classically-trained musician and composer who loved jazz, Rugolo got his professional start as chief arranger for the Stan Kenton Orchestra, one of the most successful big bands of the 1940s and 50s. He wrote more than 100 compositions for the band, according to the American Society of Music Arrangers and Composers, and was largely responsible for the distinctive sound called “progressive jazz” that enabled Kenton to take his group from the ballroom dance circuit to the concert stage.

For more than three decades, Pete Rugolo was one of the most sought-after musicians in Hollywood. He worked for MGM from 1951-1956 as a staff composer and arranger, scoring most of the film musicals produced by Joe Pasternak as well as contributing arrangements for productions like “Kiss Me Kate.” While his main focus was scoring for movies and television, he also served as musical director for Mercury records. He briefly led his own touring band in the fall of 1954, performing at Birdland, the Paramount Theatre and the the Savoy Ballroom, and following up with a concert tour including Peggy Lee and Billy Eckstine. Rugolo’s contract with Mercury allowed him to release a series of LPs featuring his own arrangements and compositions, many of which enabled him to experiment with odd combinations of instruments and bore names like “Reeds in Hi-Fi,” “An Adventure in Sounds—Brass,” “10 Trumpets and 2 Guitars” and “10 Saxophones and 2 Basses.” Rugolo also worked for a year in A&R for Barclay Records in Paris.

Rugolo’s TV credits, for which he received two Emmys and multiple nominations, included scores for “The Fugitive,” “Leave It to Beaver,” “Thriller,” “The Twilight Zone,” “The Thin Man,” “Richard Diamond,” “The Stranger,” “Run for Your Life,” “Family,” “The Bold Ones,” “The Untouchables,” and “M.A.S.H.” He also was Grammy-nominated and was honored multiple times by “Down Beat,” “Playboy” and “Esquire.”

Rugolo was a member of BMI and the American Society of Music Arrangers and Composers (ASMAC), serving on ASMAC’s Board of Directors for 25 years and receiving it prestigious Golden Score Award for Composing and Arranging in 1993, an honor previously won by Michel Legrand, Henry Mancini and Jerry Goldsmith.

Pete Rugolo was born on Christmas Day, 1915, in San Piero Patti, Sicily. The family emigrated to Santa Rosa, California in 1920, where the boy emulated his father who played baritone horn. He quickly picked up other instruments, including the French horn and classical piano and became interested in jazz from listening to bands like Gene Krupa, Duke Ellington and Ray Noble on the radio. Rugolo anticipated becoming a teacher after earning a B.A. degree from San Francisco State College. However, when he learned that the renowned composer Darius Milhaud would be teaching at Mills College, he applied even though Mills was at the time an all-female institution. He was Mills’ first male student and became what veteran jazz trombonist Milt Bernhart called “without question Milhaud’s prime disciple.” (Space Age Musicmaker, 12/28/2003)

After receiving his M.A. from Mills, Pete Rugolo was hired as an arranger and composer by guitarist and band leader Johnny Richards. He was drafted in 1942 and spent most of his time in an Army band at Fort Scott in San Francisco, playing alongside later Brubeck cohort Paul Desmond. After discharge, he joined the Stan Kenton Orchestra.

In 1958, Pete Rugolo married Edye Gaffney in Santa Rosa. In addition to his wife, he is survived by their three children, Gina Rugolo Judd (Loren), Pete Rugolo Jr. and Tony Rugolo. There are three grandchildren, Tyler and Will Judd and Jordan Kucharski.

Funeral arrangements are for immediate family only, with a public remembrance to be announced at a later date. 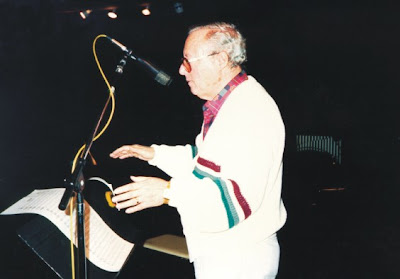 Pete Rugolo, an award-winning composer and arranger who came to prominence in the world of jazz as the chief arranger for Stan Kenton's post-World War II band and later wrote the themes for TV's "The Fugitive" and "Run for Your Life," has died. He was 95.

Rugolo, who also had a recording career with his own band, died Sunday of age-related causes at a nursing facility in Sherman Oaks, said his daughter, Gina Rugolo Judd.

"Pete Rugolo's passing is a notable event, as he was a true and powerful original, whose music made an invaluable contribution to a very rich period in American music," composer John Williams said in a statement to The Times on Monday.

As a composer and the chief arranger for Kenton from 1945 to 1949, Rugolo is credited with being a major force in shaping the progressive jazz sound of the Stan Kenton Orchestra.

"Big bands of the Swing Era were on their way out, and he came along and brought this remarkable new life to that big band instrumentation," music critic Don Heckman told The Times.

After leaving Kenton, Rugolo began a two-year stint as the musical director for Capitol Records in New York, where he was responsible for discovering and recording new acts.

"Bebop was just starting then, and I signed all the bebop players for Capitol," he recalled in a 1993 Times interview. "When their stars would come to New York -- Peggy Lee, Mel Torme -- it was up to me to record them."

Among the artists Rugolo signed was Miles Davis, and he produced the famous "Birth of the Cool" sessions with Davis' group.

But the Capitol job took too much time away from his main love: Writing music.

"I came out to Los Angeles to do a Nat Cole album and just decided to stay," said Rugolo, who recorded numerous albums with his own bands in the '50s while also arranging and conducting recording dates for Billy Eckstine, June Christy, Peggy Lee and others.

He was working as an arranger and orchestrator at MGM and was West Coast musical director for Mercury Records when he broke into television in 1958 by writing a new theme for "The Thin Man," the 1957-59 series starring Peter Lawford and Phyllis Kirk.

He went on to write a new theme and music for "Richard Diamond: Private Detective," the 1957-60 series starring David Janssen.

Among the shows he wrote themes and underscores for in the '60s are the Boris Karloff-hosted anthology series "Thriller" and, most notably, Janssen's "The Fugitive" and "Run for Your Life," starring Ben Gazarra -- the latter series earning Rugolo three consecutive Emmy nominations.

For his extensive work as a composer in television, Rugolo won two Emmys -- in 1970 for the TV movie "The Challengers" and in 1972 for an episode of "The Lawyers," which was one of the rotating elements of "The Bold Ones" dramatic series.

"Pete Rugolo is one of only a handful of jazz writers to have made an immediate splash in writing original music for television in the late '50s and early '60s," said Jon Burlingame, author of "TV's Biggest Hits," a 1996 book that chronicles the history of television themes.

"The trend starts in the fall of 1958 when 'Peter Gunn' goes on the air with a Henry Mancini score," Burlingame said. "In 1959, Pete does 'Richard Diamond: Private Detective' with equally compelling dramatic jazz."

But when "Thriller" debuted in the fall of 1960, Burlingame said, "Pete demonstrated a broader talent for writing music of a dark, mysterious and suspenseful tone."

"'Richard Diamond' was a show written for a small jazz ensemble," Burlingame said. "'The Fugitive' was written for a 55-piece symphonic orchestra. And that alone, I think, demonstrates Pete's versatility as a composer."

Born in San Piero Patti, Sicily, on Dec. 25, 1915, Rugolo moved to the United States in 1920 and settled in Santa Rosa, Calif. After earning a bachelor's degree from San Francisco State College, he studied with avant-garde composer Darius Milhaud at Mills College in Oakland.

He heard his first Kenton records during World War II while stationed at Ft. Scott in San Francisco, where he was in charge of the Army band.

"I just loved the sound of the [Kenton] band," he recalled in the 1993 Times interview. "I started copying the music down from the records and began writing that way; my band sounded like a young Stan Kenton Orchestra."

When he discovered that Kenton's band would be playing at a San Francisco theater, Rugolo took several of the best arrangements he had written in the Kenton style backstage and gave them to Kenton.

A couple of months later, Rugolo received a phone call from Kenton, who had finally been able to try the arrangements.

"He said, 'Gee, you write just like I do. As soon as you're out of the Army, you've got a job.' It sounded like a fairy story."

In addition to his daughter, Gina, Rugolo is survived by his wife, Edye; his sons, Pete Jr. and Tony; and three grandchildren.

A funeral will be held for immediate family only; a public remembrance will be announced later.
Posted by Arnaldo DeSouteiro at 6:23 AM