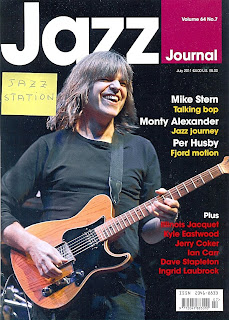 Cover Story: Mike Stern
The former Miles Davis guitarist has been dismissed by critics who should know better as a mere rocker. He says "Well, I’m more into bebop! What I'm checking out musically is Sonny Rollins and Trane." Fred Grand sets the record straight

Profiles - Dave Stapleton is turning jazz into a growth industry; Kyle Eastwood makes our day by firing off good tunes; Ingrid Laubrock gives us an idea why one of her bands is called Sleepthief

Scratching the Surface - Steve Voce recalls the trenchant Johnny Dodds ("Seventy years after his death Dodds is quietly appreciated by more musicians than ever"), the unswinging Lu Watters band and some friendly conversations with Ken Colyer, "whose poison spittle could kill a man at six paces"

Seminal sessions - Ian Carr: Solar Plexus. In the second of our occasional series on landmark recordings, Roger Farbey puts the case for a solar-plexiform thump from Ian Carr, all of 40 years ago