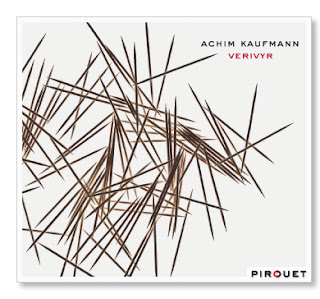 Achim Kaufmann's music is nuanced, highly refined trio jazz. The pieces on this CD are enigmatic and loaded with energy, wild and at the same time structured. The exciting streams of musical thought, the heat of creative moments, the intensity of musical movement - all are blended with the allure of discovering new musical possibilities.

"With his sensitive play and free-wheeling, searching sense of sound, Achim Kaufmann is one of a handful of exceptional jazz pianists who has injected a new pulse into West European improvised music" was how it was formulated in the tribute to the winner of the 2001 South-West Radio Jazz Prize.

The German pianist was born in 1962 in Aachen and is now living in Amsterdam. "Kyrill" - released in 2008 - was Kaufmann's debut on Pirouet as leader, but he was already a part of the party as sideman on Henning Sievert's Pirouet projects "Symmetry" and "Blackbird."

Whereas on his earlier trio recordings Kaufmann tended towards a very open improvisational style, much of the music on Kyrill - including the compositions - is more arranged and structured. Yet the music is in no way academic; rather, within its complexity there is a sensual and physical strength that fosters the sensation of freewheeling improvisation. Titled "Verivyr," Kaufmann's second recording for Pirouet Records as a leader is coming out now in July 2011.