CD of the Day - "The Jerry Ragovoy Story" 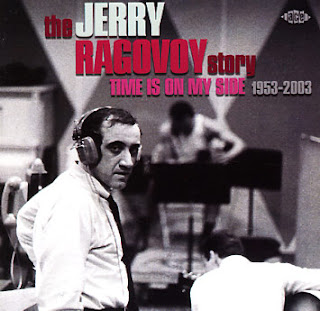 After having showcased the work of his friends and collaborators Mort Shuman and Bert Berns, Ace Records turned the spotlight on Philadelphia songwriter-arranger-producer Jerry Ragovoy. It brings together two dozen of his most significant moments from half a century of music making.

Ragovoy's production work exemplifies the classic New York `Big City' sound of the 60s. His catalogue includes numerous hall-of-fame classics, almost all of which are included here in their original versions. (Others can be heard on Vol 1 and the forthcoming Vol 2 of Ace's "Bert Berns Story", Jerry and Bert having worked together in the mid 60s).

The artists Ragovoy worked with on a regular basis: Garnet Mimms, Lorraine Ellison, Carl Hall, Irma Thomas and, perhaps especially, Howard Tate - are among the most cherished by serious soul fans, and all are featured here.

The CD highlights include the rare original version of "Time Is On My Side" by trombonist Kai Winding, the even rarer, £300-rated debut 45 from Howard Tate "You're Looking Good" (also never previously reissued), Miriam Mabeka's greatest hit "Pata Pata", and titles from both Jerry's first session (the Castelles) and his most recent to date (playing piano on Howard Tate's recut of "Get It While You Can."

The CD booklet contains a 2008 interview with Ragovoy, specially conducted for this project by another song writing legend (and friend of Ace), Al Kooper.
Posted by Arnaldo DeSouteiro at 4:08 PM