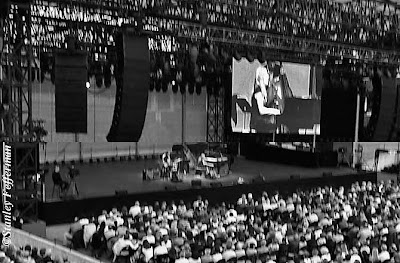 When Tony Bennett and Diana Krall co-headline a concert anywhere, it should be an electrifying experience.

Approximately 30 minutes and eight songs into Bennett's set, organizers put a hold on the proceedings due to rain and lightning bolts darting across the dark skies. Originally one 10-minute delay turned into a string of 10-minute delays before finally the show was cancelled just before 11 p.m. Despite some fans shouting "rain or shine" in reference to what was printed on their tickets, the safety of the audience and production crew took precedence.

Although iSports Concerts Ltd. President/CEO Kevin Albrecht -- who helped create the BlackCreek Summer Music Festival -- made the announcement and added Bennett regretted what happened, some fans appeared rather annoyed. Perhaps it was due to how well Bennett, a spry 84 who said he'd sing all night if the weather agreed, sounded in what little was played.

Whether on Watch What Happens or They All Laughed, Bennett was the consummate showman, thanking the crowd when not belting out the closing lines with his seasoned four-piece band behind him. The snappy I've Got Rhythm and Sing, You Sinners also earned him a loud ovation.

Bennett took a short reprieve from the songs to talk about how Bob Hope gave him his stage name and also how he and Rosemary Clooney were the original "American Idols." A cover of Hank Williams' Cold, Cold Heart followed but by the time he hit Steppin' Out, dozens of fans were stepping out to the concourse to avoid the heavy rains.

Thankfully, the skies were far from grey for Diana Krall and her three-piece group during an excellent hour-long gig. After performing a recent show in Montreal solo, Krall looked to be back in her element alongside guitarist Anthony Wilson during Deed I Do and a cover of Tom Waits' Jockey Full Of Bourbon.

Krall also showed her playful nature when an airplane flew overhead during one song. Cocking her head skyward like many in the crowd, the singer ad-libbed the lyrics to Nat King Cole's Exactly Like You without missing a beat. The result was a snippet of Bennett's Fly Me To The Moon and a bit of Elton John's Rocket Man before she played the piano intro to Benny And The Jets.

"I got a million of them," Krall said as many laughed.

The set was also filled with many extended solos with each member stepping up to the plate, hitting a home run and leaving the quartet smiling. But Krall slowed things down with A Case Of You and I've Grown Accustomed To His Face.

"I know Tony Bennett plays tennis but this is ridiculous," the singer said early on to the near capacity crowd.

No Diana, the ensuing weather was ridiculous.