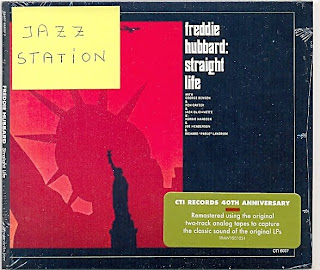 Freddie Hubbard's second album for CTI, "Straight Life," recorded in a single day session on November 16, 1970, followed "Red Clay" with another stellar cast: tenor sax giant Joe Henderson (on his heyday, when he was doing great but extremely underrated albums for Milestone like my personal favorite "Black is the Color," with a wild approach that sounds very different from the smoothness of the work in his last years), Herbie Hancock on Fender Rhodes, bassist Ron Carter, drummer Jack DeJohnette, guitarist George Benson, and percussionists Richard "Pablo" Landrum (triangle, congas, books) and Weldon Irvine (playing tambourine as if he was in a trance.)

That was Landrum's second & final session for CTI (he had previously appeared on Stanley Turrentine's "Sugar") and Irvine's first & last session for the label, although he would write two tunes for Stanley Turrentine's reunion with Milt Jackson on "Cherry." For "Straight Life," he contributed the acid-jazz anthem "Mr. Clean," revisited by the 2009 incarnation of the CTI All Stars during their European tour that year and included on the "Montreux Jazz Festival" DVD. Hubbard's title track is outstanding too, and there's a pretty version of the standard "Here's That Rainy Day" performed only by the leader on flugelhorn, Carter on bass and Benson on the guitar.
*********
Jazz historian Douglas Payne posted a great comment on his "Sound Insight" blog:
http://dougpayne.blogspot.com/2011/06/celebrating-cti-records-40th.html

For whatever reason, Straight Life is graced by not one but two Pete Turner photographs, a rarity in the CTI discography, as was the trumpeter’s follow-up album First Light. The photographer has no idea why designer Bob Ciano juxtaposed these two photographs. But he clearly approves. The front cover is called “Liberty” (1962), a double exposure. “I went to the Battery and shot [the Statue of Liberty] with a long lens for the small image,” explains Turner. “Then I took the boat to Liberty Island and kept shooting as we got closer and closer. The airplane flying by was just luck.” The back cover, “Parthenon” (1964), was from a series the photographer produced cataloging various wonders of the world, but “not picture-postcard style, more interpretative.” The abstract take on monuments honoring the Roman goddess of freedom (Libertas) and the Greek goddess of wisdom (Athena) has a curiously perfect relationship to the music of Straight Life.
********
"Straight Life" can be ordered from Dusty Groove through the link below:
http://www.dustygroove.com/item.php?id=wfwmm55vcs&ref=browse.php&refQ=kwfilter%3Dstraight%2Blife%26amp%3Bincl_oos%3D1%26amp%3Bincl_cs%3D1

And that's what they say about the CD:

An amazing second CTI set from Freddie Hubbard – one that takes off nicely from Red Clay territory, and starts to hit an even funkier mode! The tracks here are all relatively long, with a huge amount of solo space for Freddie on trumpet, Joe Henderson on tenor, George Benson on guitar, and Herbie Hancock on piano. The title track "Straight Life" has a style that's quite searing and righteous at points – almost some of Freddie's boldest playing on record from the time. It's followed by an excellent take on Weldon Irvine's "Mr Clean" – one that's rompingly funky while still as righteous as the work on side long title track – played with some great electric piano from Herbie and sweet guitar lines from Benson. The set closes with a mellow take on "Here's That Rainy Day", played in a way that reminds us of Hubbard's more lyrical style – but still with plenty of CTI 70s overtones. © 2011, Dusty Groove America, Inc.

Posted by Arnaldo DeSouteiro at 3:24 PM