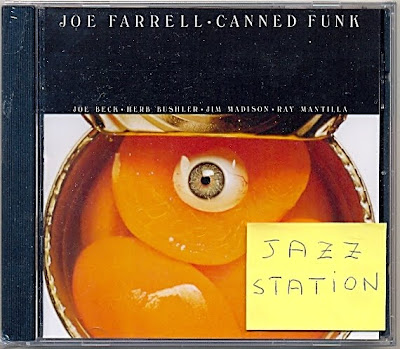 First CD reissue ever anywhere in the world (thanks to the wise guys of the Wounded Bird label) of this cult CTI album produced by Creed Taylor & engineered by Rudy Van Gelder, with an iconic cover pic by genius photographer Pete Turner (actually, chosen by Turner himself as the front cover of his latest brilliant book, "The Color of Jazz.")

The follow-up to Farrell's "Upon This Rock," this is a massive (and very very wild) jazz-funk-rock album, with four extended tunes -- the much-sampled title track "Canned Funk," the ferocious "Animal," "Suite Martinique" and "Spoken Silence" -- taped in November & December 1974 with Joe Farrell's pianoless touring quintet at that time.

Besides the leader on soprano, tenor & baritone saxophones plus flute, the group features Joe Beck on electric guitar (great use of fuzz pedal, wah wah and other vintage electronic devices), Herb Bushler (arguably the most underrated bassist of the fusion era, a great musician who can also be heard on Michael Frank's "Tiger in the Rain" and Thiago de Mello's "Amazon"), Jim Madison (aka Jimmy Madison) on drums, and percussionist Ray Mantilla, mostly heard on congas (Van Gelder obtains a fantastic psychedelic effect by applying delay effects to Ray's breaks on "Suite Martinique".) Later on, Mantilla would take part of Joe Beck's "Beck" LP debut for Kudu, reissued as "Beck/Sanborn."

Some problems, though. Like the two other Farrell's CTI albums recently reissued by Wounded Bird ("Penny Arcade" and "Upon This Rock"), this CD preserves most of the original cover artwork conceived by album designer Bob Ciano (including the liner graphics and the liner photos by Sheila Metzner), but doesn't reproduces the original "CTI label," which means that Farrell is not credited as composer anywhere! The CTI logo has also been deleted.

The liner cover of the CD includes another mistake: "Originally released as CTI 6053 in 1974," since the album (Joe Farrell's sixth project for CTI as a leader) was actually released only in March 1975, peaking at # 30 in the Billboard "Jazz Albums" chart. Despite all these errors and the crappy sound of the remastering, it still deserves to be our "CD Reissue of the Month" due to the strong musical content.

"Canned Funk" is also being distributed in Japan through Clinck Records: 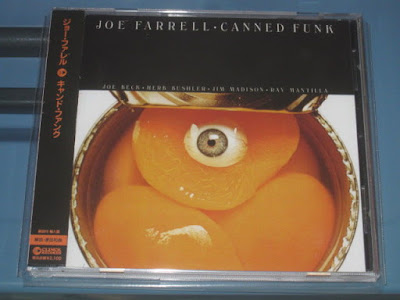 Btw, in June 2008 we had posted about a lawsuit filed by Joe's daughter, Kathleen Firrantello, in the U.S. District Court in New York, regarding unathourized sampling from the tune "Upon This Rock."
http://jazzstation-oblogdearnaldodesouteiros.blogspot.com/2008/06/joe-farrell-sampled-and-rappers-are.html

The rappers Kanye West, Methodman, Redman and Common have been sued by the daughter of the saxophonist Joe Farrell because they used parts from Farrell's composition "Upon This Rock" from 1974 without seeking permission from Farrell's estate (Reuters). The lawsuit will closely look at West's "Gone" from his album "Late Registration" (2005), at Common's "Chi-Chi" from his album "Be" (2005, coauthor and producer: Kanye West), as well as at "Run 4 Cover", a collaboration by the rappers Method Man and Redman from 1999 from their album "Blackout". Farrell's daughter seeks punitive damages of at least 1 million dollars and asks that no further copies of the songs be made or distributed.********
The CD is already available on DustyGroove:
http://www.dustygroove.com/item.php?id=gzcgrbwfhn&ref=browse.php&refQ=kwfilter%3DCanned%2BFunk%26amp%3Bincl_oos%3D1%26amp%3Bincl_cs%3D1

And that's what they say:
Nothing canned here – as the sound, style, and groove of the record is as fresh and freaky as the classic image on the cover! The riffing rhythms get going right from the start – some amazing lines from a rhythm combo that includes Joe Beck on guitar, Herb Bushler on bass, Jim Madison on drums, and the mighty Ray Mantilla on percussion – adding in these extra changes and fills that really get the tunes moving wonderfully – providing a perfect platform for Joe Farrell's wonderful work on tenor, soprano, baritone, and flute! The sax lines are as angular as the rhythms – tight, choppy, and completely funky – no wonder the record's a CTI classic that folks have dug for years! Tracks are all nice and long – and titles include "Canned Funk", "Animal", and "Spoken Silence". © 2011, Dusty Groove America, Inc.

For more details, please check: http://jazzstation-oblogdearnaldodesouteiros.blogspot.com/2010/11/three-of-joe-farrells-cti-gems-will-be.html
Posted by Arnaldo DeSouteiro at 6:23 AM