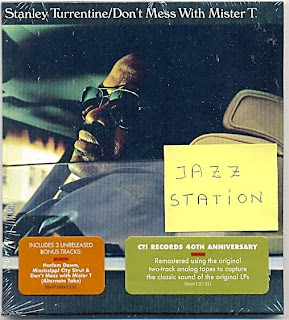 Besides the four tracks in the original vinyl release, the sessions yielded more tracks like a lovely version of Michel Legrand's "Pieces of Dreams," later included in the out-takes compilation "The Sugar Man." The problem was that the track was completely remixed for the first CD reissues of "Don't Mess With Mister T," and Richard Tee's annoying organ performance (deleted by Creed Taylor from the original analog mix done at Rudy Van Gelder Studio) was resurrected, affecting the final results and specially Harold Mabern's perfect Fender Rhodes solo.

I was hoping that, this time, Sony would decide to use the original Van Gelder mix, restoring "Pieces of Dreams" to its original aesthetic as heard on "The Sugar Man." But they didn't. Once again what we hear is the mistaken remix and now I pray that they decide to release the first ever CD reissue of "The Sugar Man" in a near future. Despite the horrible mix of "Pieces of Dreams," "Don't Mess With Mister T." is a great album, highly recommended.

Btw, it can be purchased from Dusty Groove through the link below:
http://www.dustygroove.com/item.php?id=35t59ydj6p&ref=browse.php&refQ=kwfilter%3Dturrentine%2Bdon%27t%2Bmess%26amp%3Bincl_oos%3D1%26amp%3Bincl_cs%3D1

And that's what they say:
Perfect Bob James electric arrangements make this LP by Stan one of his best for CTI! The record's got a laidback dope 70s approach to funky jazz – with loads of nice modal chords, sliced through by some deep soul solos from Stan. Players include Idris Muhammad, Bob James, Harold Mabern, and Eric Gale – and the record features a great remake of Marvin Gaye's "Don't Mess With Mister T", plus "Too Blue", "Two For T", and "I Could Never Repay Your Love". © 2011, Dusty Groove America, Inc.
************
Doug Payne, the top CTI expert, also reviewed this reissue:
http://dougpayne.blogspot.com/2011/06/celebrating-cti-records-40th.html

Don’t Mess With Mister T. is the last of the studio albums tenor sax great Stanley Turrentine recorded for CTI Records between 1970 and 1973 and unquestionably one of the saxophonist’s - and the label’s - most satisfying outings. Indeed this album and Turrentine’s first CTI album, Sugar, rank not only among Stanley Turrentine’s best recordings in his multi-faceted career, but also among his most popular and the two that lent him the nicknames that stuck with him throughout the remainder of his career (“The Sugar Man” and “Mister T”).

Helmed with beautiful fortitude by arranger/pianist Bob James, Don’t Mess With Mister T. is a joy from start to finish, offering Stanley Turrentine’s sensual horn playing on some bluesy, after-hours grooves that showcase his sound and style to, ah, a “T.”

Originally released in September 1973, Don’t Mess With Mister T. was a success from the very start. This may have been the label’s greatest crossover success, gaining black audiences that Miles Davis was trying (but not succeeding) to court at the time.

No doubt it had something to do with Alen MacWeeney’s memorable mack daddy cover shot of Turrentine in Black Godfather mode peering over his shoulder in what appears to be a Cadillac Eldorado (the pimpmobile of choice back in the day) and the saxophonist’s flawless performance of the title tune, best known from its appearance in a popular Blaxploitation film of the time.

Marvin Gaye’s tremendous “Don’t Mess With Mister T.” comes, of course, from the first-rate soundtrack to the now forgotten film Trouble Man, which yielded another superb CTI cover (also arranged by Bob James) by Grover Washington, Jr. on Soul Box. Turrentine takes charge of the song, playing it with the heart and soul that suggests it was written just for him.

Bob James gives the song a relaxed feel that is perfect for Turrentine’s easy-going but unquestionable command of things. Buffered by James on piano and electric piano, Richard Tee on organ, Ron Carter on bass, Idris Muhammad (who replaced Billy Cobham) on drums and an absolutely perfectly deployed horn and string section, Turrentine offers up a sumptuous celebration of jazz and soul, melding it together with a heated precision that could melt butter or warm honey to overflowing. James takes a terrific solo on piano here that ranks among his best on record to this point, but everybody coalesces into a terrific climax of musical ecstasy that made it the signature theme it ultimately became (Turrentine recorded the song again for his 1995 album T Time).

Turrentine offers up two of his own originals, the spunky “Two For T,” adding Harold Mabern on electric piano and Eric Gale on guitar, and “Too Blue,” with Mabern, Gale and percussionist Rubens Bassini. In addition to showcasing Turrentine in his element, “Two For T” features spots for Mabern, Carter and Muhammad while “Too Blue” offers solos for Gale and James, again on piano. James wisely does away with the horn and string accoutrements on these numbers (though “Too Blue” finds the horns making a quick appearance) and just lets Turrentine and company take care of business.

“I Could Never Repay Your Love” offers up one of the saxophonist’s signature gospel performances, something too few of his records ever did (check out “I Told Jesus” for Turrentine’s previous bow to the church). The song was originally one of the few from the Spinners’ eponymous 1973 album that didn’t turn into a hit. That album yielded hits out of “I’ll Be Around,” “Could It Be I’m Falling In Love,” “One of a Kind (Love Affair)” and “Ghetto Child.” Turrentine is impassioned and beautiful here, set alight by James’ lovely strings and horns, and touching, yet fiery solos from Eric Gale and Richard Tee.

The original program totals only about 30 minutes. But even though more music from these sessions was left off the record, it’s worth pointing out that while vinyl in those days could accommodate considerably more music, Creed Taylor consciously kept CTI albums around a half hour long, or fifteen minutes a side, to maintain the big, clear sound he developed in the studio with engineer Rudy Van Gelder. Like digital files of today, the more you compressed music on vinyl, the less aural clarity it had. That’s why CTI records sounded better than so many jazz records of the day.

The first time that Don’t Mess With Mister T. was issued domestically on CD in 1988, it included Stanley Turrentine’s first recording of the Michel Legrand song “Pieces of Dreams” from these sessions as a bonus track. The memorable song from the not-so-memorable 1971 film had already been covered by such singers as Peggy Lee, Sarah Vaughan and Rita Reys, but this was one of the first jazz recordings of the tune. It was obviously a song that the saxophonist felt strongly about. But producer Creed Taylor didn’t quite agree, so the song was left off the original album. This decision probably prompted Turrentine to seek more autonomy (and considerably more money) at Fantasy Records when his CTI contract expired.

Stanley Turrentine recorded the song anew in a silkier, smoother (and ultimately less satisfying) arrangement by Barry White’s arranger, Gene Page, as the title track to his Fantasy debut album, issued in October 1974.

The song became a radio hit and Creed Taylor hurriedly released the 1973 recording of the tune on The Sugar Man, a hodge-podge compilation of outtakes and unreleased tunes, in February 1975. Even though the Bob James arrangement of the song is the stronger of the two performances, the Fantasy version had already become a hit and it was that version that most people listened to and, more importantly, bought. The CTI version was pretty much ignored.

The song found its way onto CD as part of the first domestic digital issue of Don’t Mess With Mister T. in 1988 (as well as several compilations and the 2003 European edition of the CD, which matches the 2011 CD’s programming), but in an altered mix that differed from The Sugar Man version by adding Richard Tee’s organ pronouncements throughout. Producer Richard Seidel was not aware of The Sugar Man mix of “Pieces of Dreams” until it was too late – so the “other” mix of the song is heard here again.

Still, back on Don’t Mess With Mister T., where it belongs, “Pieces of Dreams” reveals one of the few misjudgments Creed Taylor made in his lengthy career and, in hindsight, one of the first cracks in the mighty wall that CTI had built in only a few short years.

While Taylor’s instincts may have evaded him for “Pieces of Dreams,” it was clear that his instincts had been right on for the recording of Don’t Mess With Mister T.. That’s because, as it turns out, the album we’ve known for nearly four decades was not the first recording Turrentine made of the album.

Several months earlier, Turrentine got together with Bob James, Eric Gale, Ron Carter, (the strangely uncredited) Johnny Hammond on organ, who miraculously orchestrates from his particular position, and Billy Cobham (drummer on Turrentine’s previous Salt Song and Cherry) to lay down tracks for the album. Even though this group more or less made up the CTI All Stars of the time, producer Creed Taylor felt the recording just wasn’t working.

Despite the expense involved, Taylor opted to do nothing with the recordings until a more suitable recording situation presented itself. Three of the tracks recorded at these sessions finally showed up on the 2003 European CD release of Don’t Mess With Mister T., including a completely inferior take of the title song (thoroughly justifying Taylor’s initial decision), Billy Cobham’s “Mississippi City Strut” and Bob James’ “Harlem Dawn.”

Each track in itself is spectacular, especially given the fact that its leader is no longer with us and every note he blew is worth savoring. But given the terrific nature of the final album that was Don’t Mess With Mister T., it’s audibly obvious why the producer thought the music, while perfectly serviceable and exceeding the qualities of most jazz fusion being made elsewhere at the time, was certainly not up to the CTI standard, a bar that was raised with each successive album at this point in the label’s history.

Indeed, Don’t Mess With Mister T. raised the bar for Stanley Turrentine, and provided a measure that the saxophonist probably didn’t equal or better at any point after this in his career. It’s a classic that sits high among the classics Stanley Turrentine waxed and one of the great CTI titles of all time.

Posted by Arnaldo DeSouteiro at 8:27 AM