Instrumental CD of the Month - "Bill Carrothers Trio: A Night at the Village Vanguard" 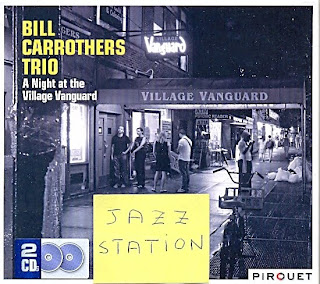 Instrumental CD of the Month
Bill Carrothers Trio: "A Night at the Village Vanguard" (Pirouet) 2011

The art of the piano jazz trio is really amazing. It's always contemporary, remains undated, and allows us to savour many aesthetics concepts that are always surprising. The evolution of the Bill Carrothers Trio, as documented on this brilliant 2-CD set, is the newest good blessing. It's the perfect combination of introspection and expressiviness, never sounding too cerebral (or "intellectual") like most of the European trios in the current scene, neither sounding too predictable like most of the American trios (all, including the Brads and Jason, still trying to copy Bill Evans or Keith Jarrett and using an agressive approach a la Bad Plus).

Btw, there was a time, in the mid-80s, when I tought that Jarrett's "Standards" Trio couldn't be surpassed. Actually, they (Jarrett, Peacock, DeJohnette) can't, because there's a special magic there. But there's a different kind of very special magic also on trio dates I recently heard on albums led by Marc Copland, Pablo Held and Bill Carrothers -- not coincidently, all recording for the Munich-based Pirouet label. Each one has its own distinctive soul. And Carrother's latest effort, live at NY's Village Vanguard, certainly ranks among the best "jazz piano trio" albums of the decade.

The musical intensity is hauting, but they play pretty too, like in my two favorite tracks, "Gertrude's Bounce" and "Junior's Arrival." Pretty but never in an "easy" mood. There are great ballad performances too, such as Richie Powell's "Time" that sound romantic but never mellow. Bill revisits several tunes from his previous studio album, recorded with different musicians (Drew Gress and Bill Stewart): the superb "Joy Spring," focused on songs composed by or associated with Clifford Brown. But once again they sound fresh and surprising thanks to the personal energy that the new musicians brought to the engagement. Not to mention Carrother's strong originals. Listen also to what they do to "Jordan Is A Hard Road To Travel." It's a musical miracle, started by bassist Thys and developed by his pals in the highest level of creative power.

Top track: Richie Powell's "Gertrude's Bounce"
Other highlights: "Tiny Capers," "Joy Spring/Delilah," "Let's Get Lost," "This Is Worth Fighting For," "Days of Wine and Roses" and "Blue Evening"
**********
Pirouet's first live and first double CD features pianist Bill Carrothers' fabulous trio. The album relives an entire concert: the first set - CD1, the second set - CD2. An evening at the legendary Village Vanguard jazz club with the trio of one of the best American jazz pianists of the last twenty years is passed on, and you can listen to sparkling, shimmering piano-trio jazz -- music that has many a heady, exciting story to tell.

Bill Carrothers always sounds different - and always has his own sound. He was born in 1964, lived in New York a good twenty years ago, and then moved back out of the Big Apple. Today he lives near a town called Mass City on Michigan's Upper Peninsula, and enjoys the seclusion. He says that he needs trees, and doesn't want a lot of people around him. He is a real individual - also as a musician.

He said in an interview that he wants to allow a certain amount of chaos in his fingers. Bill primarily practices pieces from Bach and Mozart; he doesn't practice jazz in order to safeguard against playing clichés. A musician can't be further from clichés than Carrothers is. He has proved that on his four previous Pirouet recordings, "I Love Paris," "Keep Your Sunny Side Up," "Home Row" and, the best of them all, "Joy Spring."
Posted by Arnaldo DeSouteiro at 6:22 AM