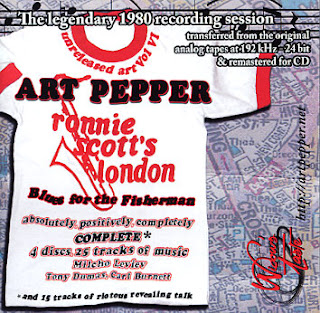 "Blues For The Fisherman" features motherlode of material, with both energetic, roof shaking numbers and more delicate, subtle ones. The 4-CD set, an expanded & complete version of a live engagement previously available as a single LP, is especially cool in it's inclusion of Art's avuncular stage banter, really making us feel like we're there in the audience and making us wish we were! It's Vol 6 in the "Unreleased Art Pepper" series, and it's a heck of a lot of music from a legendary session in one package. As usual, Milcho Leviev stands out, performing astonishing piano solos.

'The Twelve Bars of the Decade.' - "Blues for the Fisherman" was hailed by one jazz journalist as just that when four of these tracks were released in the U.K. in 1980 by the Mole Jazz label. That LP remained at the top of the British jazz charts for well over a year, so Mole eventually released a second album from the same session. Fans all over the world have worn those LPs out and have been clamoring for 30 years to hear it all, everything that happened during those two historic nights at Ronnie Scott's, part of Art Pepper's first-ever tour of Europe.

Laurie Pepper, the alto saxophonist's widow and owner of Widow's Taste Records, says there is a logic to releasing everything. "Art was a storyteller," explains Laurie. "Every tune was a vehicle, a way for him to express his life of pain and glory. He loved to talk about it, too. Communication, soul to soul, was what he aimed for. When we listen to these sets, we hear a narrative: In the music and between the tunes Art keeps us, the audience, informed. He lets us track the skill, persistence, anguish, and exhilaration of the process of performing, the story of an artist at work. From the stage he tells us what is and isn't working as he sees it at the moment. He reveals how nervous he is and how grateful for a sympathetic crowd to whom he jokes, complains, explains, and reminisces." 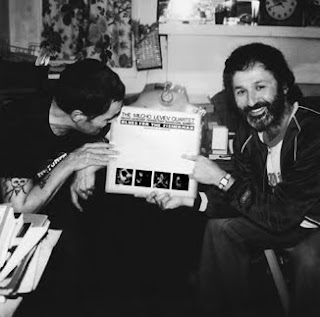 The band features Milcho Leviev, "The Bulgarian genius" (Arnaldo DeSouteiro) and frequent Pepper sideman. (Above: Pepper and Leviev with the original Mole vinyl release.) He was putative leader of this session. (Art was then under contract to Galaxy Records, which would not permit him to record as leader for any other label, however obscure). Also in the band: the young, exciting Tony Dumas on bass and Art's favorite drummer, Carl Burnett.

At Mole's behest, Art plays some tunes less usual for him in 1980: "Stardust," "Rita San," "Untitled #34," "Blues for the Fisherman." He also plays familiar favorites, "What's New," "Goodbye," "I'll Remember April," "A Song for Richard," "Rhythm-A-Ning," and his own: "The Trip," "Ophelia," "True Blues, "Red Car," "Make a List," and of course "Straight Life" (while announcing it Art plugs his autobiography of the same name, about to be released in England later that year). And he plays clarinet, as well, on "Anthropology" and "In a Mellow Tone." Every set at Ronnie's was a little piece of art, a composition, lovingly constructed for an eager and perceptive audience. 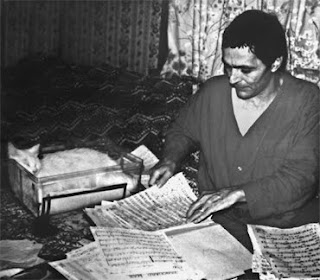 The album includes Laurie's personal photos and 24 pages of notes describing Art's emotions and preoccupations, how he felt about the situation's pressures and delights. (Above: Pepper prepping music, assisted by feline muse Blanche.) She talks about "The Fisherman," and, as usual, she gives us her own amused, nonplussed, and dazzled take on all of it.
***********
Laurie Pepper launched the Widow's Taste label in 2006 in order to introduce Art to a generation who "may not know how soulful jazz can be," to offer an alternative to the shoddy wares of bootleggers, and to satisfy the blessedly insatiable desires of Art's knowledgeable fans. Using previously unreleased sessions recorded by radio stations or picked up surreptitiously by fans, she's inspired to keep going by those fans and by the overwhelming praise of critics.

Since it began, Widow's Taste has released one album every year:
Volume I: "Abashiri" (2006)
"Unreleased Art, Vol. 1 is a required purchase for Pepper fans who want to relish Art's devotion to his craft all the way to the end of his life. Playing from the heart that few alto players [can] match. . . . Bluesy and explorative. . . along with some frenzied avant blowing." --Jeff Krow, Audiophile Audition

Volume II: "The Last Concert" (2007)
"He left this world at the top of his game, as one of the world's foremost alto sax players. And now, we can confidently state these things because of Unreleased Art, Vol. II. [He] nimbly hits every note bang on through some tricky passages [with] imaginative, lyrical improvising. [When] Pepper switches to clarinet, an instrument that for not being his primary one, is so well mastered by Art he could have stood toe to toe with Buddy DeFranco." --Pico, BC Music

Volume III: "Croydon" (2008)
"The album has enormous depth, pathos, and tension. Both Croydon discs vividly display Pepper's metallic warmth and seemingly limitless stream of ideas. This CD reflects the agony of his personal and artistic struggle. Pepper's tonal edge is on full display on uptempo numbers as well as the ballads. Dig what he does with Gordon Jenkins's 'Goodbye.' There's so much sorrow there, so much Billie Holiday. On Ophelia, a mid-tempo piece dedicated to women, Pepper's passion soars as he delivers line after line without ever coasting or doubling back." --Marc Myers, JazzWax

Volume IV: "The Art History Project" (2009)
"The set dedicates one CD to Pepper's work from the 1950s, one to the '60s, and one to the '70s. The early tracks float by on his urgent, vulnerable, and melodic alto saxophone improvising. It's some of the best West Coast jazz of that time, luscious pop art with a fighting spirit. The set becomes interesting in the 1960s, after Pepper's six on-and-off years in jail, and shows his increasing respect for John Coltrane. Ms. Pepper lobbies hard for the '70s as his prime period. . . . The intensity and experience they transmit is unmistakable." --Ben Ratliff , The New York Times

Volume V: "Stuttgart" (2010)
"[On 'Make a List'] Pepper proves what a great R&B saxophonist he is, funky and rich, full of that greasy good charm that causes feet to stomp and parishioners to cry 'Amen.' A master of musical drama. . . Pepper's playing is a tidal wave from a detonated atom bomb, relentless in climax. Extended readings of 'Over the Rainbow' and 'Cherokee' close the set illustrating Pepper's supreme command of the ballad and up-tempo bop. This is the Götterdämmerung of the jazz life." --C. Michael Bailey, AllAboutJazz.com
Volume V in this series, "Stuttgart" was named one of the top ten historical/reissues of 2010 by JazzTimes and Arnaldo DeSouteiro's Jazz Station Poll.

Laurie plans to continue releasing great unheard Art as long as she continues to discover material. Planned for next year: A magnificent live concert in Norway including a video of part of the performance. "Maybe the most dramatic offering yet," she suggests.