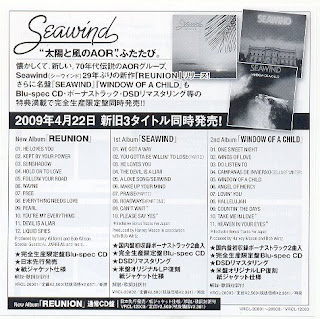 The Blu-spec CD, developed by Sony Music Entertainment, applies the manufacturing technologies optimized for the specifications demanded for Blu-ray discs. During the manufacturing of the disc, laser beam is pinpointed to encode data on the microscopic tracks molded on the polycarbonate plastic constituting the surface of the disc. Compared to the conventional laser beam used for the manufacturing of standard CD, the blue laser beam used for the manufacturing of Blu-spec CD has a shorter wavelength, allowing more accurate encoding of the data. Furthermore, polycarbonate plastic optimized for Blu-ray is used to ensure accurate reading of the data. Amazingly and importantly, Blu-spec CDs are fully compatible with standard CD-players.
"Seawind" and "Window of a Child" were originally released on Creed Taylor's CTI label in the late 1970s, and had been previously reissued on CD in Japan back in 1998 by Vivid Sound Corporation. Actually, both albums were done as independent projects produced by drummer Harvey Mason (in association with Bob Wirtz), who offered the tapes to CTI.

When Vivid Sound reissued them in 98, they did it through a license agreement with King Records, who still owns the rights of most of the CTI catalog for the Japanese market. But the members of Seawind had already managed to get the rights back and issued this statement on the band website:

"Can you believe it? Yes, King Records in Japan "accidentally" released on CD, the two Seawind CTI masters! King Records was in fact, the Japan licensee for Creed Taylor's CTI Records back in the 70's, when CTI was still in business. However, King failed to realize that Seawind had won all rights to their CTI masters back in 1978, when CTI fell into Bankruptcy Court and Seawind sued Creed Taylor and won! "It really upset me when I saw that King had released the two Seawind CTI masters in Japan", said Blue Johnson, Seawind manager. "The music of Seawind is sacred ....and no one should be messin' wit' it ....without the band's permission!" (smile) All joking aside, the good thing is that this unfortunate incident has been stopped and settled out of court! King Records has paid for their "mistake"! If any of you fans out there happen to see any Seawind CD's that don't appear to be legit or that don't look like the Seawind CD's shown on our Albums Page, please e-mail us and let us know about it. We thank you in advance, for helping us to police and preserve the musical legacy and integrity of Seawind." Period.

"Seawind", the self-titled debut album from 1976, yielded the dancefloor jazz hit "He Loves You" (thanks to the samba spice provided by special guest Brazilian percussionist Paulinho da Costa). The two bonus tracks added to this new CD reissue are "Can't Wait" and "Please Say Yes".
Its follow-up album, "Window of a Child", recorded in 1977, once again with lead vocalist Pauline Wilson on the frontline, now comes with the bonus tracks "Take Me In Love" and "Heaven In Your Eyes". Prior to these new Japanese reissues, both "Seawind" and "Window of a Child" were available in limited CD issues sold exclusively on the band website.
A third Seawind CD, "Reunion," their first new CD in 29 years!!!, is also being released today, including remakes of "He Loves You," with Al Jarreau doing a cameo appearance, sharing the vocals with Pauline Wilson. The group spent almost three years recording this new project in four state-of-the-art studios in the Los Angeles area. It also includes updated 2009 arrangements of "Follow Your Road," "Free," and "Devil Is A Liar."

Posted by Arnaldo DeSouteiro at 10:21 AM

Still thank you for all information on your blog