DVD of the Day - "Paul Simon: Live from Philadelphia" 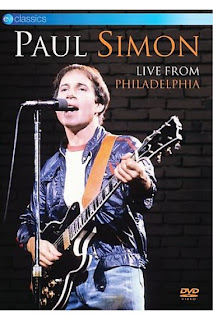 This concert was filmed at Upper Darby's Tower Theater, in Philadelphia, back in 1980 and it was originally released on VHS in '81. It was restored for DVD in 2008 by Eagle Vision and i'ts now available on this format through ST2.

Despite the fact that the running time is very short (52 minutes, counting the 3 encores), the musical quality is high. The set list ranges across his career up to that point and includes both Simon & Garfunkel and solo hits. Highlights: "Me and Julio Down By The Schoolyard" (the original 1972 studio recording had Brazilian percussionist Airto Moreira playing cuica!), "Still Crazy After All These Years," "One-Trick Pony," "Jonah" (that sounds like a Michael Franks song) and "Late in the Evening". The three encores are "American Tune," "The Boxer" and the solo number "The Sound of Silence."
Posted by Arnaldo DeSouteiro at 10:22 AM