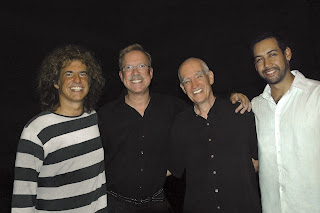 “. . . though we have each gone on to new ventures, when we get back together again, the rapport that always came so easily is still front and center. This has been the most fun I’ve had in a very long time.”--Gary Burton

This performance will mark the first Boston concert appearance by Gary Burton and Pat Metheny in over 30 years! The Gary Burton Quartet Revisited will also appear alongside Patti LaBelle, SMV and others at Freihofer’s Jazz Festival held at the Saratoga Performing Arts Center www.spac.org in Saratoga Springs, New York on Saturday, June 27.

Great partnerships only come along now and then in the jazz world and for the new Concord Records release, "Quartet Live," (due May 26) several overlapping combinations of legendary musicians got together to celebrate the ground-breaking Gary Burton Quartet.

Bassist Steve Swallow joined with vibraphonist Gary Burton in 1967 to form the first Gary Burton Quartet and they continued working together for over two decades. Then in the early ‘70s, 19-year old guitarist Pat Metheny began his career by taking over the guitar chair in the Burton group for three years, the start of a 35-year long musical friendship between the vibist and guitarist.

A decade ago, Metheny discovered drummer Antonio Sanchez, inviting him to join The Pat Metheny Group, and they have been playing together ever since. These long-lasting, overlapping musical partnerships are the foundation of this landmark recording, great artists who really know each other’s playing in depth.

Metheny came up with the idea to revisit the Gary Burton Quartet, the band that had been his entry into the jazz world. “For me, as a teenager in Missouri just starting to appreciate jazz, Gary’s group was the most innovative band around. And, it was my dream to someday be a part of it.”

Everyone thought it would be fun to perform as the Gary Burton Quartet again and a concert at the Montreal Jazz Festival was scheduled. It turned out to be more than just fun. The musicians’ rapport and the freshness of the playing was so energizing that the group decided to take it on the road, touring in Japan and the USA the following year. That still wasn’t enough, so the group reunited once more for a European tour in 2008, and has now added some more performances in 2009 in the USA and Canada.

Burton was already recognized as a major jazz artist before he was out of his teens, winning polls and earning high praise from both critics and fellow musicians. As a vibraphonist, he is considered a legend and a pioneer of new techniques. With his new band, the Gary Burton Quartet, he was the first jazz musician to bring country and rock music influences into jazz, several years before jazz fusion became widely popular (it was first called Jazz/Rock by the music press). He continues pioneering new and diverse musical directions to this day, including popularizing jazz duets with Chick Corea and becoming recognized as an expert interpreter of tango music.

After achieving international recognition as a member of the Gary Burton Quartet, Metheny formed the Pat Metheny Group and soon established himself as one of the most successful guitarists and band leaders in modern jazz. He has won more Grammy® awards than any other jazz musician and his records and performances are among the most popular of any jazz artist. He is a fearless innovator, always exploring new styles of music and new guitar technology. And he has advanced the standards of jazz record production more than any other modern day musician.

During his years with Burton, Steve Swallow transitioned from playing upright acoustic bass to electric bass, on which he is now considered one of the top players in the world. He is known not only for his ensemble work but also his strong, recognizable soloing style. Swallow has a gift for being the ultimate team player, always supportive and reliable, but also a constant contributor of ideas and concepts to any enterprise he joins. He is definitely one of those people who fits the description “a musician’s musician.”

Antonio Sanchez, a native of Mexico, arrived in the United States to study music at Berklee College in Boston, where Gary Burton was serving as Executive Vice President and Pat Metheny (a former Berklee faculty member) made occasional visits to meet with students. Antonio’s talents shone through quickly and as he finished school, he was invited to join the Pat Metheny Group. Just as Pat made the transition from student to pro when he joined the band of his idol, Gary Burton, Antonio followed the same path into Metheny’s very successful group. Now in great demand for recording and concerts, Sanchez continues playing with Metheny, but also works frequently with other major jazz artists.

For the remainder of 2009, ALE will produce the world tour of Kind of Blue @ 50 featuring legendary drummer & NEA Jazz Master Jimmy Cobb with his So What Band; the Freihofer’s Jazz Festival at Saratoga Performing Arts Center on June 27 & 28; Terence Blanchard Quintet on October 28 at Zankel Hall; a historic Persian Music concert on November 14 at Carnegie Hall; and so much more.

Further information on ALE can be found online at absolutelylive.net
Posted by Arnaldo DeSouteiro at 8:49 AM