CD of the Day - "Return To Forever: Returns" 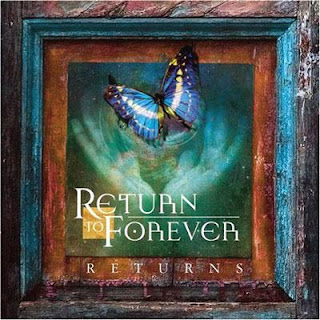 Due to their performances on "Returns", all the RTF members - Chick Corea, Stanley Clarke, Lenny White and Al DiMeola - were voted among the best musicians of the year in our 2008 Jazz Station Poll. For details, please take a look on the link below:
http://jazzstation-oblogdearnaldodesouteiros.blogspot.com/2008/12/29th-annual-jazz-station-poll-best-jazz.html
The 2008 reunion of Return to Forever's classic mid-1970s line-up marked an extraordinary event for fans of progressive jazz fusion. It was really the jazz event of the year, generating a long sold-out tour. The mind-boggling chemistry of the band proves as explosive as ever 20 years after the second incarnation of the group first dazzled audiences with their complex, rock-influenced hybrids, boasting such jazz-rock classics as "No Mystery," "Hymn of the Seventh Galaxy," "Romantic Warrior," "Song to the Pharaoh Kings" and "Vulcan Words," the latter being the first song that I, Arnaldo DeSouteiro, selected when preparing the "Jazz Rock" compilation I produced for Verve also in 2008.
This 2-CD set was recorded live mostly on July 31st, 2008 at Ruth Eckerd Hall (Clearwater, Florida), except for three tracks: "Duel of the Jester and the Tyrant" (live at the Bank of America Pavillon in Boston on August 6th, 2008), "500 Miles High" (at the Montreux Jazz Festival, in Switzerland, on July 18, 2008) and an alternate version of "Romantic Warrior" cut when RTF received the BBC Lifetime Achievement award presented by Sir Gorge Martin in a date not specified on the CD booklet).
All the solo spots are equally great, specially Corea's acoustic piano improvisation that leads to a subtle rendition of Miles Davis' "Solar", with Clarke on acoustic bass and White showcasing his impeccable brushwork. There is, as one might guess, no shortage of stretching out from each of these four jazz luminaries. Like the "JazzTimes" reviewer wrote: "This two-CD set delivers all the impossibly tight unisons, cascading streams of 64th notes and virtuosic soloing that longtime RTF fans have come to expect from their heroes."
The "RTF Live at Montreux 2008" DVD is scheduled to release in the USA on May 12, 2009, by Eagle Vision.
Posted by Arnaldo DeSouteiro at 7:26 AM