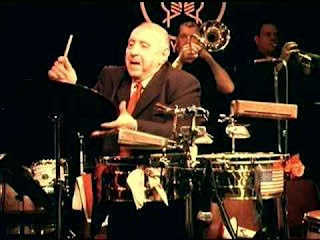 Manny Oquendo, the Latin band leader, timbale player and percussionist who was an expert with the típico Cuban rhythmic style and later infused it into Latin jazz, died on March 25 in the Bronx. He was 78. The cause was complications from a kidney operation, said Andy González, his musical director of 35 years in their band, Libre.

Mr. Oquendo’s involvement with Cuban rhythms on the timbales and bongos dated back to his childhood. Born in 1931 in Williamsburg, Brooklyn, to parents from Puerto Rico, Jose Manuel Oquendo spent most of his formative years in Spanish Harlem, where he lived above Almacénes Hernández, the area’s early famed Latin record store, and later on Kelly Street in the Bronx. Also nearby on Kelly Street were Arsenio Rodríguez, the celebrated master of the tres, the Cuban guitarlike instrument, and future music stars like Joe Cuba, the Palmieri Brothers and Little Ray Romero.

Mr. Oquendo began playing a trap drum set at 15 and later took lessons, alongside the future jazz drummer Max Roach, from Sam Ulano, a well-known teacher. By the late 1940s, he was playing with New York’s top bands along with Chano Pozo and Juan Torres, known as El Boy. When Mr. Oquendo joined Tito Puente’s orchestra as a bongo player he often used his sartorial and musical talents to attract the attention of the surging seas of dancers in places like the Palladium ballroom. In 1962, he joined Eddie Palmieri’s seminal band, La Perfecta, which challenged the big band scene with a smaller, conjunto lineup that called for fewer players and more improvisation.

Those familiar with the traditional dance hall rhythms of Cuban mambos, guarachas and rumbas could see that Mr. Oquendo’s approach to his instruments was intentionally understated. “First of all, you shouldn’t overplay,” Mr. Oquendo said in an 1997 interview with Latin Beat magazine.

“The timbales are for providing accompaniment, backup for the group; and a good timbalero must have a strong left hand to play the tumbao and pailas or cascara,” he said, referring to different rhythmic patterns in a measure. “The timbalero must always keep the beat.”

While playing in La Perfecta, where he met Mr. González, his future musical director and a bassist, Mr. Oquendo picked up and adapted the complex carnival rhythm called Mozambique, made popular in Cuba by Pello El Afrokán, and reworked it for the timbales, introducing a hypnotic African beat to the dance halls of New York. In 1974, he and Mr. González began Libre, creating a sound outside traditional parameters.

Libre has released 12 albums, including the popular “Mejor que Nunca. ” In a review of a 1983 concert in The New York Times, Jon Pareles called Libre a traditionalist band with infusions of modal Afro-Cuban jazz that made it progressive. “But when Libre charges into its arrangements, which unite three trombones, Dave Valentin’s nimbly assertive flute, two singers and a sizzling rhythm section,” Mr. Pareles wrote, “those categories are lost in the beat.”

In his 1997 interview with Latin Beat, Mr. Oquendo said: “It’s important to develop the ear and get a deeper knowledge of the music, and once you become good at the instrument, you must always remember to try to be original, be yourself. You can borrow, you can take, you can even steal, but you do not imitate.”

Among Mr. Oquendo’s survivors are two sisters, Jean Vega and Lydia Crespo. Mr. González said Libre would continue and said he was planning a tribute concert on May 30 at the Bronx Museum of the Arts for Mr. Oquendo, who played with the band until January.
Posted by Arnaldo DeSouteiro at 4:36 PM