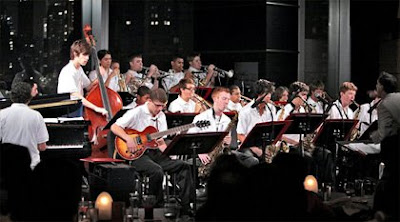 The Next Generation Jazz Orchestra (formerly known as the MJF High School All-Star Big Band from 1971-2004) nurtures the future generation of jazz stars through a program that selects the best and brightest high school jazz musicians in the country. In 2009, the twenty-two member jazz orchestra features musicians selected from thirteen high schools from Western States and the East Coast, including Arizona, California, Connecticut, New York, Oregon, and Pennsylvania. Six states have contributed members this year in a cross-section of the best high school jazz programs in the country.

As in the past, these students will speak for their generation as loudly and clearly as their predecessors, which include pianists Benny Green and Patrice Rushen, bassist Larry Grenadier, drummer Chad Wackerman, and saxophonists Joshua Redman and Dave Koz, to name a few. The full list of members of the 2009 Next Generation Jazz Orchestra appears at the end of this post and is available on the Monterey Jazz Festival website, www.montereyjazzfestival.org.

Under the direction renowned saxophonist and flautist Paul Contos, who serves as the director of the Orchestra, the ensemble is dedicated to the study and performance of the most challenging big band literature available.

The Next Generation Jazz Orchestra will embark on its annual summer tour on July 5, appearing in clubs, at music conventions, academic institutions in the Heartland of the United States, with gigs in Kansas City, Chicago, St. Louis, Cincinnati, Pittsburgh, and Washington D.C.; the tour is being dubbed the KC/DC Tour. With a final tour appearance on the Kennedy Center’s Millennium Stage, their tenure in the band will culminate at the 52nd Annual Monterey Jazz Festival Presented by Verizon on September 20th on the Arena/Jimmy Lyons Stage, where they will appear with trumpeter and 2009 MJF Artist-In-Residence, Wynton Marsalis.

“I am really thrilled for these exceptional young jazz musicians to have the opportunity to truly experience what it is like to be in a professional level big band on the road, said Dr. Rob Klevan, Education Director for the Monterey Jazz Festival and Next Generation Festival. The fact that we have nine performances in ten days and will be starting the tour in Count Basie’s backyard with a grand finale in our nation’s capital makes it even more exciting. I can’t wait to get on the bus!”

In 2009, there are five returning members of the Next Generation Jazz Orchestra: trombonists John Egizi and Emmanuel Rojas; bassist Mike Gurrola, drummer Jimmy Macbride, and trumpeter Nick Frenay. Nick Frenay of the Manlius Pebble Hill School in Dewitt, New York, is the only three-time member of the NGJO this year, and has previously performed with the band at the Hilton in Paris, France; New York City’s Jazz at Lincoln Center, the North Sea Jazz Festival in Rotterdam, The Netherlands; as well as on the Arena/Jimmy Lyons stage of Monterey’s 50th, 51st, and 52nd Festivals.

The Monterey Jazz Festival is also proud to announce the winner of the Next Generation Festival's prestigious Big Band Composition Competition, Andy Clausen. Mr. Clausen a trombonist and junior at Roosevelt High School in Seattle, Washington, won the Competition with “Fly,” which will be performed by the Next Generation Jazz Orchestra on the Arena / Jimmy Lyons Stage on September 20th, 2009. He will receive the 2nd Annual Gerald Wilson Award and a cash prize.
***********
About the Monterey Jazz Festival

The Monterey Jazz Festival is dedicated to perpetuating the uniquely American form of music known as jazz by producing performances that celebrate the legacy and expand the boundaries of jazz; and by presenting year-round local, regional, national, and international jazz education programs. The Monterey Jazz Festival is a nonprofit organization and has donated its proceeds to musical education since its inception in 1958.

Additional financial support for the Next Generation Festival comes from organizations such as the Joseph Drown Foundation, the D’Addario Music Foundation with gifts-in-kind from Yamaha, Rico Reeds, and generous individual contributors.

The 2009 Next Generation Jazz Orchestra

If you get a chance come by and say hi at my Monterey Blogsite !!