Spirit of Life Ensemble (SOLE) at the Gillespie Auditorium 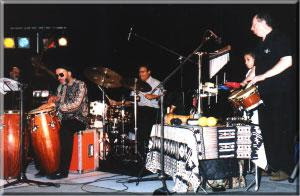 Swing with Jazz Legend, Singer Joe Lee Wilson when he joins Daoud-David Williams & the Spirit of Life Ensemble at "Jazz Tuesdays" next Tuesday, June 12 in the Gillespie Auditorium at the New York Baha'i Center at 53 East 11th Street (between University Place & Broadway). There will be two shows at 8:00 and 9:30.

Formed in 1975, Spirit of Life Ensemble (SOLE) is under the leadership of multi-percussionist Daoud-David Williams. The music of this captivating, diversified and a true reflection of the group's name. Their sound is soulful, passionate, and filled with infectious energy, while at the same time inventive and thought provoking in its concept, thereby capturing the spirit of artistic creativity. Although their music is deeply rooted in the jazz tradition, it has been strongly influenced by the myriad of musical styles found in the African Diaspora.

The rhythms of Latin America, the Caribbean Islands, Africa, and the African-American musical genres of rhythm and blues, gospel, funk, and the blues permeate the sound of this electrifying ensemble, whose "jazz with a world beat" approach leaves your heart dancing long after your feet have stopped. The collective experience of SOLE members includes performances and/or recordings with icons of jazz such as The Ellington Orchestra, The Basie Orchestra, The Hampton Orchestra, Clark Terry, Dizzy Gillespie, Kenny Barron, John Hicks, Nancy Wilson, Ahmad Jamal, Charles Mingus, Horace Silver, Buddy Rich, and many others.

Their Music Appreciation Concerts feature jazz and world music for young people. Excellent for school assemblies, these “edu-tainment” performance workshops are interactive and include traditional and original compositions of Blues, Latin, African, Afro-Cuban, Brazilian, and Euro-Classical music for children of all ages. Spirit of Life Ensemble is available for concerts, workshops, seminars, master classes, assembly programs, lectures and residencies. The group performs as an eight to 18-piece band or smaller combo of five to seven pieces.