Sarah Partridge at the Algonquin Hotel 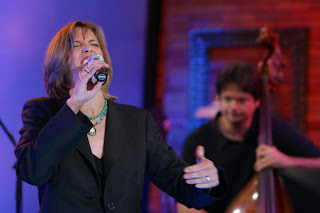 With elegant tradition and high musical style, jazzy songbird and actress Sarah Partridge is set to appear again at the world-famous Oak Room at the Algonquin Hotel [59 West 44th Street between 5th and 6th Avenues] with a new show called “I’ve Gotta Roam” till June 23. Some of her shows at the legendary nightspot are a part of New York’s hottest jazz event, the JVC Jazz Festival-New York, which takes over the city this year, during the week of June 17 – 30.

Partridge, who hails originally from Weston, Massachusetts and currently resides with her husband, two kids and a greyhound in South Orange, New Jersey, was voted 'GMA BREAKOUT ARTIST' by ABC's Good Morning America last summer. And now, she has a hot new CD, entitled You Are There: Songs for my Father, on Nagel Heyer Records.

Sarah is a relative late-comer to the music business, as film was her first love. As a college grad, she played an unforgettable role opposite TOM CRUISE as the babysitter in the classic film Risky Business. Cruise and Sarah are still friends.

For 100 years, the Algonquin Hotel has been greeting and lodging the country's most prominent writers and literary personalities, as well as the leading figures of the American stage. Partridge’s music fits in perfectly with that history. Her song list includes music from the Great American Songbook such as “Yesterdays,” “Detour Ahead,” “Beyond the Sea,” “Back in Your Own Back Yard,” “April in Paris,” and “Gypsy in My Soul.”

Featured in Sarah Partridge's stellar band will be Allen Farnham on piano, Tim Horner on drums and Bill Moring on bass.

Sarah Partridge’s shows at the Algonquin will be held until June 23, Tuesday through Thursday at 9 pm and Friday and Saturday at 9 and 11:30 pm. There is a $60 cover charge per person and a $25 minimum. A $65 prix fixe dinner is optional for most shows; required at the early shows Friday and Saturday. For reservations, call 212-419-9331 or write to bmcgurn@algonquinhotel.com.

Since the Sarah Partridge engagement is also a part of this year’s JVC Jazz Festival-New York, jazz festival-goers can get a terrific two-for-one deal on tickets to the late shows Friday and Saturday, June 22 and 23. The 2-for-1 deal allows festival ticket holders from a JVC Jazz Festival-New York main event (Carnegie Hall, Lincoln Center, Danny Kaye Playhouse, Town Hall, etc.) to bring their ticket stubs to the late show at the Oak Room to be eligible to buy one ticket and get one free, as available. At the Oak Room for Sarah’s shows, one person would pay $60 plus a $25 minimum and the other person would pay just the $25 minimum.

Singing along to a karaoke machine "on a dare" is not the way most aspiring singers begin their career. However, this is how jazz singer Sarah Partridge got her start. While enjoying a successful and busy career as an actress, Partridge went to the Improv in Los Angeles with friends, to enjoy a night out. A karaoke contest began and her chums urged her to participate, just for fun. Partridge, a jazz enthusiast, reluctantly agreed and eventually found an “elevators only” version of “Summertime.” Her beautiful, rich voice captivated an L.A. booker, who assumed that she was a professional jazz singer. Before she could say “help,” she found herself billed as the featured vocalist in a live jazz salute. This was not an easy accomplishment considering that she knew only 10 songs all the way through. Yet, she was a smashing success and hasn’t taken a step backward, from that evening on.

Spending most of her early childhood in Boston and attending high school in Alabama, Sarah claims that her father is responsible for her love of jazz. From the time she was born, the only music Sarah heard around the house was Ella Fitzgerald, Chris Connor, Dakota Staton, Irene Kral and, of course, Sarah Vaughan. While other kids were singing nursery rhymes, Sarah was humming “Lush Life.” She couldn’t have avoided this music if she'd tried!

Partridge also developed a keen interest in acting at a young age. She decided to enroll at the prestigious Northwestern University, where she majored in theater. After receiving her degree, Partridge stayed in Chicago and landed her first feature film role -- opposite Tom Cruise in that smash hit, Risky Business. She then headed west to L.A., where she acted in several more films and became actively involved in doing commercials and voice-overs. She was often heard portraying super heroes on cartoon shows! Throughout the late eighties and early nineties, Partridge could be seen guest-starring in numerous TV series, sitcoms and soap operas . . . then came that fateful night at the Improv -- when an old dream reawakened and she soon shifted the focus of her life back to music.

Currently leading a bi-coastal life, Sarah has been spotted entertaining audiences at many notable east-coast haunts such as, New York’s Firebird Cafe, The Hideaway, Delmonico’s, The Jazz Standard and many others. L.A. jazz spots include, Catalina’s Bar & Grill, Spazio, and the Hollywood landmark, the Cinegrill. She is consistently pegged as “pick of the week” in newspapers on both coasts.

Until his death in early June of 1997, Sarah could often be found practicing her own brand of meditation -- that of sharing the bandstand with her pal, legendary jazz giant, Doc Cheatham. She was a fixture at his Sunday afternoon jazz brunches at New York’s Sweet Basil Restaurant. They also teamed at other local clubs such as Metropolis and New Jersey’s, Trumpets. He affectionately referred to her as “a woman of high voltage!”

Her debut CD, I’ll Be Easy to Find continues to get considerable airplay, nationwide. It received excellent reviews, including in the industry’s barometer, Billboard Magazine. Her second CD, Blame It on My Youth, was released in 2004.
Posted by Arnaldo DeSouteiro at 7:02 PM