The Historic Relationship Between Jazz & Poetry 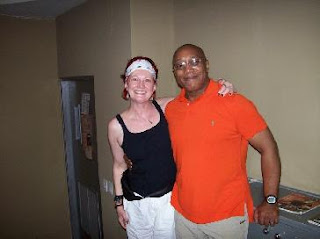 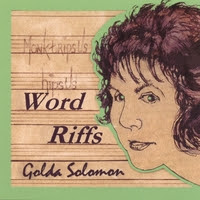 PO’ PEOPLE/PO’ JAZZ and FROM PAGE TO PERFORMANCE is a Co-Production between Professor/Poet/Performer Golda Solomon founder of Po’Jazz (Poetry in Partnership With Jazz) and Nora McCarthy, Vocal Artist/Composer/Lyricist/Poet. Solomon’s first Panel Conference “Po’People-Po’Jazz, Poetry In Partnership With Jazz: Then and Now” was introduced at this year’s IAJE Conference in January. June 5 marks the second panel presentation in an on-going series moderated by Solomon and is a free event that precedes the performances. Panel members include: journalists Bill Milkowski and Willard Jenkins; poet, EJ Antonio; Erik Lawrence, alto saxophonist of MERGE; and, Mike Canterino, former owner of the Half Note. A panel of poets, jazz historians, journalists and jazz musicians who discuss and demonstrate what happens when words and jazz come together.
“Five decades ago, poetry and jazz met. Today, New York City is at the forefront of a po-jazz revival.” Bill Milkowski

In contrast, Solomon’s portion of the performance will include the group “Center Search Quest” whose members include: Christopher Dean Sullivan, bass; Michael TA Thompson, percussion; Eri Yamamoto, piano; and, Saco Yasuma, alto saxophone with special guest: trumpeter Roy Campbell. They will be accompanying Solomon’s unique jazzy interpretative readings from her recently released CD “Jazz Riffs” and other specially selected pieces from her extensive body of work.

McCarthy (pictured above with drummer Billy Cobham) and Solomon will share both sets with their individual musicians and then have a “jam” for part of the second set. This dynamic event is hosted by pianist and band leader Mike Longo and the Baha’i Center as part of the Tuesday Night Jazz Series. This is a first for this long running successful series and it promises to be informative, chock full of anecdotes and most of all fun.

GOLDA SOLOMON (poet), “the medicine woman of jazz” - Golda Solomon is a professor of communications, speech, and theater arts; a poet, performer, producer, and docent; a supporter of women musicians as well as young musicians, poets, and performers. She was project director of Po’Jazz at The Hudson Valley Writers’ Center for four years before bringing the series to The Cornelia Street Café in 2003. Golda has pioneered several unique businesses including JazzJaunts, a personalized jazz service, and, with Barbara Sfraga, ICAAN (Interactive Communication and Arts Network), which provides innovative, on-site, organization-specific arts programming to workplaces, schools, and other organizations. She and poet/writer/musician/teacher Monique Avakian are currently conducting “From Page to Performance” workshops for emerging poets and “ready to come out of the closet” writers.

Golda has a collection of poetry, Flatbush Cowgirl, published in 1999, for which she co-produced a companion CD, First Set, and a second CD of her poetry, Word Riffs. Her latest collection is Never More Than a Borough Away, Brooklyn Bops (Clique Calm Books). She also co-produced the CD Po’Jazz: Takin’ It To The Hollow.

She is an active member and presenter for IAJE (International Association for Jazz Education) and a founding member of IWJ (International Women In Jazz). As an IWJ awardee, she was part of the week-long 40th anniversary celebration of All Nite Soul at St. Peter’s, the “Jazz Church” in midtown Manhattan.. She returns to St Peter’s Church as part of the First Women In Jazz Festival 2007 .

Several of her poems are currently featured on the poetry page of www.jerryjazzmusician.com, and she is included in the yearly collection, The Mom Egg, a collection of poetry, prose and drawings by creative artists who are also mothers. Solomon’s book and CDs are available on www.amazon.com, www.cdbaby.com and www.jazzjaunts.com.

"Poet Solomon...Think of it as Jack Kerouac revisiting the Mile High City and grabbing a sandwich at the New York Deli while in town." — Norman Provizer, Rocky Mountain News

NORA MCCARTHY – vocal artist, composer, poet, Nora has performed at the top jazz venues in New York and has been a steady fixture on the New York music scene since her arrival in 1996. A multi-faceted artist, she works in many capacities and formats. In addition to her Qu’ART’et, the following are projects Ms. McCarthy currently produces: A Small Dream In Red – Voice and Saxophone Duo and The ConceptualMotion Orchestra – a 20-piece all original music big band co-lead with alto saxophonist, Jorge Sylvester. The CMO opened the internationally renowned avant garde Vision Festival X in June, 2005; The Sidhe – People of Peace Creative Music Series that presented monthly at the Cornelia Street Café in Greenwich Village and combined a variety of classic, contemporary and new music art forms in a multi-media format; The Red Voxx Group – an experimental nu-modern collective; and, The Beyond Words Voice and Bass Duo with Dominic Duval. Nora is also a featured member of Master Conductor Lawrence D. “Butch” Morris’ A Chorus of Poets.

Through her vast experience in the jazz and creative music field, McCarthy also conducts various workshops and master classes that deal with, among other things, vocal empowerment. Nora has developed a unique approach to teaching voice and improvisation and is founder of "The Zen Of Singing...The Spiritual Path To Finding Your Voice.”™ (www.thezenofsinging.com).

In April, 2007, Ms. McCarthy conducted a series of workshops and master classes in Podgorica, Montenegro for Jazz Appreciation Month entitled “From Dixieland to the Avant Garde and Free Music Art Forms - The Voices and Horns”. Ms. McCarthy studied voice and piano at Cleveland State University, Cleveland Music Settlement and briefly at Cleveland Institute of Music. In 2002, Nora received a scholarship from New School University for Jazz Vocal Performance. Ms. McCarthy teaches privately and also conducts various workshops in the art of improvisation.

McCarthy has produced and released two CDs: red&blue (1996) and A Small Dream In Red (2005). Her latest CD, Spirit Eye is scheduled for release in 2007. Her CDs are available on-line through www.cdbaby.com and her website: www.noramccarthy.com and Downtown Music Gallery, 342 Bowery [between E. 2nd & E. 3rd Streets], New York, NY 10012-2408, www.downtownmusicgallery.com

"Nora’s vocal identity, aside from a basic jazz orientation, defies classification, and makes spare use of reflexive stylistic mannerisms. In the placement of her voice, Nora can evoke the power of a Malian Diva’s fearless candor, or perhaps a Corsican Voceratrice’s call to invisible worlds in the language of dreams, or the earthiness of an early blues singer’s unvarnished autobiographical witness. She has been attentive to the fluid articulation, phrasing and timbre of the jazz trumpet, the instrument that most clearly has influenced her vocal development. Her shaping of pitch often foregoes the fluid note-bending of the jazz singer in favor of the full press of a sculptor’s touch against viscous clay."...Ramsey Ameen, Scholar, Musician, Mathematician and Former Violinist with Cecil Taylor.