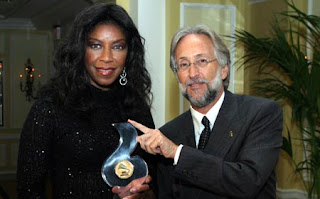 Message from Neil Portnow (pictured above with singer Natalie Cole):

More than three years ago during my first speech in Washington as President
of The Recording Academy, I called on Congress to enact a performance
royalty for artists when their recordings are played on the radio. Last
week, The Academy and a coalition of music groups launched a major campaign
to turn this call to action into a reality. The musicFIRST campaign has
begun.

The musicFIRST (Fairness in Radio Starting Today) Coalition seeks to end the
free pass for corporate radio. I encourage you, as a Recording Academy
member, to become involved in this campaign. Visit our coalition website:
www.musicfirstcoalition.org for more information and to make your voice
heard in Congress.

I will continue to keep you informed as we continue this fight for fairness
for recording artists.