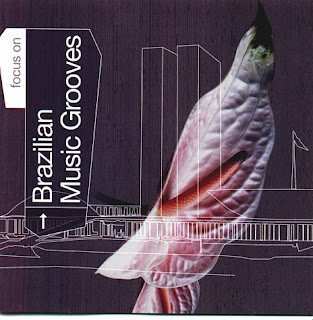 So, prepare to meet a gaggle of heavyweight masters from Brazil. You don’t need a travel agency. Just pack an attentive eye and a musical imagination – then get inspired to join me on the beach or in the rain forest – or even in a tropical dancefloor!

Our journey has a broad scope, and starts with the world-widely famous sound of bossa nova.

A true genius, Antonio Carlos Jobim, who transcended the bossa nova boundaries in over 40 years of career, is featured on “Anos Dourados” (“Looks like December”,) a song he wrote in the mid-‘80s. On this recording, Jobim’s inimitable
piano backs one of Brazil’s leading singers, Maria Bethânia, famous for her dramatic skills.

Jobim, who wrote such classics as “Girl from Ipanema”, “Wave,” and “Desafinado,” is also the composer of “Corcovado” (“Quiet Nights of Quiet Stars”,) heard here on an inventive rendition by pianist/arranger Mario Castro-Neves’ group.

A jazzier side of the bossa nova is represented by “Você e Eu,” a Carlos Lyra standard performed by Raul de Souza. Acclaimed as one of Brazil’s best instrumentalists, de Souza moved to the USA in the mid-‘70s and soon developed a strong reputation in jazz circles, recording with such artists as Sonny Rollins, Cal Tjader, Georgie Fame and George Duke. This track comes from Raul de Souza’s solo debut album, recorded in 1964 with the Sambalanço Trio as his backing band. The drummer is percussion wizard Airto Moreira, who went on to play with Miles Davis, Chick Corea, Santana and Tina Turner, and recently scored a big European dance hit with his “Samba de Janeiro,” a smash for German pop act Bellini during the summer of 1997.

Few people are aware that Flora Purim began her career, in the early ‘60s, as a bossa nova singer. Voted top vocalist in DownBeat’s Readers Poll for several years running, Purim’s impact on the jazz scene of the ‘70s was once compared, by renowned jazz critic Leonard Feather, to Billie Holiday’s in the ‘40s. This track, “Gente,” was written by Marcos Valle, who also composed “Samba de Verão” (“Summer Samba”) and “Os Grilos” (“The Crickets sing for Anamaria’), and is now being rediscovered by a young audience in Europe thanks to acid jazz artists and DJs.

Purim’s version comes from her recording debut, a single recorded in ’64 with three other tracks, but never reissued in any format. The backing band, assembled by legendary drummer Dom Um Romão (who went on to work with everyone from Frank Sinatra to Weather Report) is pure dynamite.

We also have several gems from the ‘70s and the ‘80s. João Bosco’s infectious modern samba groove on “Linha de Passe” established his reputation as one of Brazil’s most respected songwriters/performers of the post-bossa generation. The same comment applies to Ivan Lins, composer and singer of “Abre Alas,” who would develop – with the aid of Quincy Jones – an international career in the ‘80s, having his songs covered by the likes of George Benson, Patti Austin and Quincy himself.

Vinicius Cantuária is heard singing his biggest hit, “Lua e Estrela,” from his 1982 debut album, a hard-to-find item even in Brazil. Another collector’s item is the 1977 album which blended the incomparable talents of multi-instrumentalist Sivuca (who worked with Harry Belafonte in the USA) and guitarist Rosinha de Valença (who played with Sergio Mendes in the early days of the Brasil ’65 group). It’s represented by one of its strongest tracks – a very creative rendition of “Asa Branca,” possibly one of the five most famous Brazilian songs ever and the biggest hit of composer Luiz Gonzaga, known as “the king of the baião”.

Traditional samba rhythms are evoked by such masters as Martinho da Vila, on his lovingly syncopated “Disritmia,” and Paulinho da Viola, who performs a classic samba from the ‘40s, “Não Tenho Lágrimas.” And songstress Nana Caymmi appears on “Milagre,” in a duet with her father, composer Dorival Caymmi, a true living legend of Brazilian music.

Guitarist Toninho Horta joins the Tamba Trio on “Sanguessuga” (aka “Aquelas Coisas Todas”), a cult hit on the European jazz dancefllor. (Please note that the Tamba Trio, one of bossa nova’s first successful groups, has just reunited and is back on the road, thanks to their version of “Mas Que Nada” used on a Nike TV advertisement starring Brazilian soccer player Ronaldo.)

Banda Black Rio, a legendary act acclaimed for its unique fusion of Brazilian samba and American funk elements, is featured on “Cravo e Canela” (“Cinnamon and Clove”), a song by Milton Nascimento and Ronaldo Bastos.

One of Brazil’s greatest vocal stars, Gal Costa displays her talents on “Nua Idéia,” a song written in 1985 by pianist João Donato and for which Caetano Veloso later added lyrics. Donato is the only Brazilian musician who paid his dues in the popular U.S. latin-jazz circuit, playing with Tito Puente and Mongo Santamaria. This track clearly documents Donato’s style, fusing samba and latin rhythms in an infectious groove.

At last, a pop star of tremendous mass appeal: Lulu Santos, who scored a number one dancefloor hit in Brazil, in 1995, with “O Descobridor dos Sete Mares.”

So, welcome aboard this journey through poignant melodies, percolating rhythms, poetic lyrics, irresistible grooves and much more. Let’s celebrate the release of “Focus on Brazilian Music Grooves,” a CD which embodies the incredible diversity and sophistication of Brazilian music!