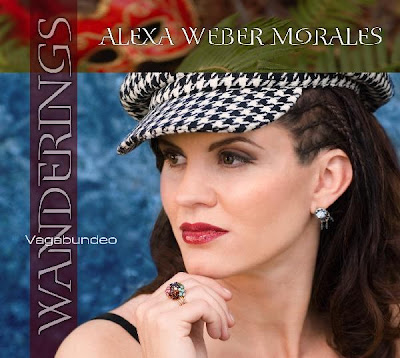 Following the warm reception accorded her 2004 debut CD Jazzmerica by press and radio, and her star turn as vocalist and lyricist on trombonist Wayne Wallace's 2007 release The Reckless Search for Beauty, the prodigiously gifted Alexa Weber Morales steps out with an exceptional new recording, Vagabundeo (Wanderings), on Wallace's Patois label.

"Alexa embodies the mission statement of Patois Records," says Wayne Wallace, who co-produced the CD with Weber Morales. "Not every record label wants you to mix things together, and at the same time it's not every artist who can do that. Alexa is one to try things that others won't. In this day and age of commercialism, I think it's important to put out something with art in it. There's always some kind of twist in what Alexa does; it's not the straight up and down stuff."

As Chuy Varela put it in Latin Beat magazine, "She is a jazz singer at heart but with a soul that sees no borders within its musical perspective."

Singing in English, Spanish, French, and Portuguese, and thoroughly at ease creating her fresh brew of salsa, jazz, bossa nova, and funk, Alexa is a commanding vocalist with a vivid, passionate sound. "There are three things I can't live without: strength, rhythm, and voice," she says. On Vagabundeo, she brings to life a wide spectrum of compositions - by Bizet, Jobim, Edu Lobo, and Ruben Blades, as well as her own striking originals - with her confident rhythmic sense and emotive phrasing.

The opening aria "Habanera" (from Carmen), sung in French over a pilon-salsa arrangement; the haunting a cappella rendition of "Calling You" (from the film Bagdad Cafe), with bass singer Bryan Dyer and tenor/baritone Kenny Washington; "Angelitos Negros" (from the 1948 Mexican film of the same name), on which Alexa is backed by a gospel choir; her affecting ballad "You Cry, I Dry Your Tears," which closes the album - these are but a few of the highlights on a CD that will go far to establish Alexa Weber Morales's place in the front ranks of today's vocal artists.

Alexa Weber Morales was born to a musical family in Berkeley, California in 1974. From early on, there was an emphasis on language (her parents founded Berkeley's Ecole Bilingue, where she and her brothers learned French) and music. Alexa began classical piano lessons at age five, and took voice lessons as a teenager. "I did get some classical training, and can sing an aria and sight-read, but my voice is more contemporary," she says. "As with everything in my life, there's a broad range: I'm drawn to the street and the intellectual, the refined and the folk."

Weber Morales studied languages at Bryn Mawr College for a year, but the call of music was stronger and she left to pursue it, performing in cabaret and theater and - after moving back to the Bay Area - on boats and in malls, at Renaissance Faires and cafes, with chamber choirs and at Grace Cathedral. She continued her independent music studies and worked with myriad local musicians at many venues.

Like most artists, she found making money and making music a challenge to reconcile. On top of that, she married young, to a recent Mexican immigrant who "told me that music is a nice hobby, but it will never be something big. I told him we'd get married on two conditions: I'd have a lot of animals and eventually, I was going to make it as a singer." Alexa worked as an editor at a Spanish-language magazine, which later launched a Brazilian edition. She traveled to Brazil, Peru, Uruguay, Argentina, and Cuba (where she attended the Escuela Nacional de Arte).

In 1999, she took a class at Jazz Camp West with Wayne Wallace, who "respected me as a musician and songwriter." She began to understand that not only her singing voice but her songs were viable.

A mother of two young boys, Weber Morales started work on Vagabundeo while pregnant with her second child and maintained demanding recording and gigging schedules just weeks after giving birth. She once struggled with balancing art and commerce; now her priorities are motherhood and music. "I was laid off from my magazine job when I was pregnant in December 2005. Everyone wonders when to quit their day job. In my case it quit me. Now I'm applying everything I learned from ten years in that creative business to my full-time focus as a musician." Like any working mother, she faces a daily juggling act; she documents hers in her blog, which offers "Tips for Multitasking Musician Moms."

Having recently completed a successful three-night engagement at Pearl's in San Francisco, featuring many of the musicians from Vagabundeo and material from both of her CDs, Alexa is poised to continue the momentum. Among her near-future engagements are Bach Dancing and Dynamite Society in Half Moon Bay (6/17); La Pena, Berkeley (8/17); the San Jose Jazz Festival (8/19); Jazz on the Row, Santana Row, San Jose (8/21); and Yoshi's, Oakland, with Wayne Wallace (10/9). And beyond the Bay Area, Vagabundeo will help spread the word about this exciting singer and performer.