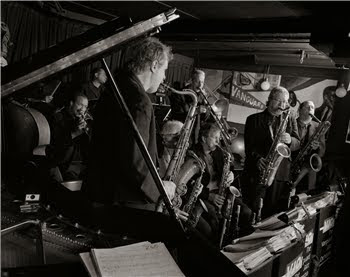 As many New York Metropolitan area residents retreat to their summer homes, The Vanguard Jazz Orchestra will be setting up residence in the hills of Assisi. For the past three years the orchestra has been providing performances and workshops in the historic city as part of the Assisi Performing Arts Festival.

The annual one week residency, generally scheduled during the second week of July, will become an official event on Monday, September 21 as the Mayor of Assisi, Claudio Ricci, joins the band at the Village Vanguard to kick off the project.

The VJO’s summer home will be open to students, musicians and educators from all over the world and will feature guest artists, daily workshops around the city and nightly performances at the Piazza Del Commune.

The Assisi Performing Arts Festival is an education based music program that offers musicians, developing artists, students and music educators an opportunity to work closely with music industry professionals. The program of study focuses on honing musical skills and developing career opportunities through interactive performances and workshops designed to accommodate participants at various levels in their musical careers.

Jazz Assisi is a collaboration between the Assisi Performing Arts Festival and The Vanguard Jazz Orchestra. The goals are to establish and maintain a jazz performance/education initiative in the city of Assisi and to create an active forum for the exchange and dissemination of ideas related to jazz and the creative process.
Posted by Arnaldo DeSouteiro at 10:52 AM