This Sunday, September 20, at 7:30pm, Diana Krall performs at the Stockholms Konserthus, in Sweden, backed by Ben Wolfe (bass, replacing Bob Hurst who had replaced John Clayton since the beginning of the "Quiet Nights 2009 Tour"), Karriem Riggins on drums (Jeff Hamilton had a gig in California yesterday @ Steamers) and guitarist Anthony Wilson. 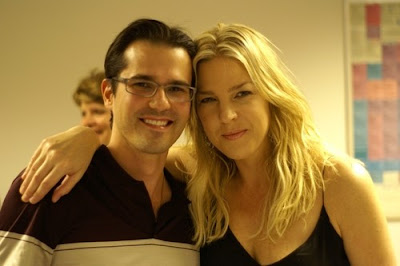 The blue Concert Hall at Hötorget (the Haymarket) in central Stockholm is one of Sweden’s great architectural masterpieces. Opened in 1926, it was designed by architect Ivar Tengbom during a period of expansion in the capital. The Concert Hall was built to house what is now the Royal Stockholm Philharmonic Orchestra and to serve as an arena for the Nobel Prize Ceremony and other such formal occasions.

The Stockholm Concert Society was formed in 1902 to give regular musical performances in Stockholm. At first a loose collective of musicians, it went on to become a permanent ensemble in 1914. The orchestra only had places like the rather dilapidated old Auditorium at Norra Bantorget in which to give its concerts, and the need for its own concert hall grew ever-pressing.

An accumulated pot of money and a lottery provided enough funding for the announcement of an architecture competition, which was eventually won by the young professor of architecture Ivar Tengbom. His grand vision was to erect a classical Greek temple to the honour of music facing the market stalls of Hötorget and amidst the rather shabby and drab, squat little buildings that surround it. Building work on the Concert Hall began in 1923, and by 1926, during an epoch instilled with the democratic ideal and stylistically inspired by the cradle of this political dream – Athens – Stockholm obtained what turned out to be its best example of neoclassical architecture. Stockholm was evolving from a town into a city.

Since its inauguration, the Concert Hall has been the home of the orchestra originally known as the Stockholm Concert Society, then the Stockholm Philharmonic Orchestra, and finally, since the early 1990s, the Royal Stockholm Philharmonic Orchestra. Since 1926 it has also hosted the Nobel Prize Ceremony every 10 December; the City Hall, where the Nobel Banquet is currently held, was built at the same time.
Posted by Arnaldo DeSouteiro at 9:00 AM