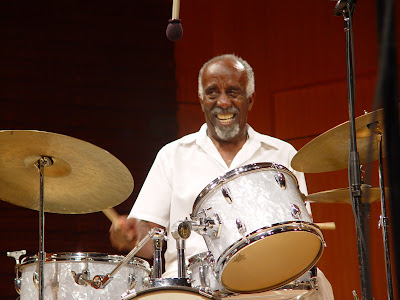 The drummer Eddie Locke died September 7th at the age of 79, Locke grew up in the jazz scene of his native Detroit, and then moved to New York in 1954 where he was mentored by Jo Jones, Count Basie's drummer, and played at the club Metropole. He worked with Roy Eldridge and Coleman Hawkins during the 1960s, and then became the house drummer at Jimmy Ryan's club until it closed in the early 1980s. He worked with musicians such as Roland Hanna, Teddy Wilson, Kenny Burrell, Earl Hines or Warren Vache, but also on the Tonight Show and other TV programs. For many years he taught music at The Trevor Day School in New York.
Posted by Arnaldo DeSouteiro at 7:53 AM